Quickly Recognize a Cocaine Overdose (& What to Do)

Most people who take cocaine want to experiment with it. The substance is popular because it is said to make people feel alert and energetic.

It is important to remember that cocaine is scheduled in many parts of the world, which means it can mostly be purchased illegally.

Buying cocaine in this manner increases the chances of triggering negative health outcomes, such as cardiac issues, withdrawal, and overdose. This is true even when buying cocaine in its purest form.

The only way to truly prevent an overdose is to abstain from using cocaine. But some people will inevitably take cocaine even when cautioned against it.

According to the U.S. Centers for Disease Control and Prevention, cocaine-related overdoses rose by 52.4 percent per data from 2015 and 2016.

Recognizing the signs of an overdose could allow you to help someone you know quickly before it’s too late. Learn what to look for and what to do.

How Much Is Too Much?

Taking too much cocaine is not just about the amount that is ingested. It also involves understanding how long it stays in the bloodstream.

The Better Health Channel says the effects of cocaine last between 15 and 30 minutes. Cocaine has a half-life of two to four hours.

Because cocaine is not legal in many areas, there is no maximum or minimum recommended dosage. And, because it is not regulated, it’s tough to know what is actually in each batch purchased on the street.

Everyone is different, but commenters on forums such as Reddit have self-reported that 1 gram is too much for some people in a span of 1 to 3 hours. Other users report that they never go above half a gram per session.

Keep in mind that the scientific community has not studied the effects of these amounts. These are just based on anecdotal user experiences.

Risk Factors for a Cocaine Overdose

If you’ve ever used cocaine, you might have felt like a little more could lead you to overdose. However, despite that, you likely continued using the drug 15 minutes afterward when you came down and went about your night. With that being said, you might have later wondered how much cocaine to overdose? Well, there are some risk factors that contribute to cocaine toxicity and ways to determine if you’ve had too much cocaine.

The National Institute on Drug Abuse (NIDA) estimates that ten percent of those who start using cocaine will eventually progress to serious, heavy use of the drug. If you or someone you know has become addicted to cocaine, it’s vital to know the signs of cocaine overdose to save lives. However, while knowing those signs will help, you must always know some of the risk factors involved in cocaine toxicity to prevent an overdose altogether.

According to data from DAWN, patients that ended up in the emergency room for a drug-related cause provided the following reasons for their cocaine use:

With that all being said, what are some of the risk factors of a cocaine overdose? What makes some more prone to overdosing than others? Well, there are distinct factors that can cause an overdose. In most cases, those using cocaine are likely using other drugs in conjunction with it. For example, cocaine can produce severe anxiety, which is overcome with alcohol. When you’re consuming alcohol and cocaine simultaneously, it dulls the effects of one another. For that reason, you won’t feel how intoxicated you are from alcohol until you stop cocaine, and you won’t feel how high you are from cocaine until you stop the alcohol. This is one factor that can lead to a potentially fatal overdose.

Other factors that increase the odds you’ll overdose on cocaine include the following:

Knowing these factors and cocaine overdose symptoms can prevent an overdose and save your life. Cocaine is an extremely potent stimulant drug and has intense effects on your body. The only way to avoid cocaine overdose is to not use the drug at all. You might also wonder – how do I know if I’m overdosing on coke? We’ll go over that more below.

Ways To Prevent a Cocaine Overdose

Again, the best way to prevent an overdose is to avoid cocaine use altogether. If you opt to use cocaine anyway, some things you can do to avoid an overdose are listed below.

The signs of a cocaine overdose are similar to those of an overdose from other drugs. Per MedlinePlus, look out for these signs if you know someone has taken cocaine:

More serious indicators of an overdose include the following:

Prolonged usage of cocaine can lead to your brain stopping dopamine production without cocaine. When your body becomes accustomed to higher levels of cocaine in the body and is used to the drug helping the production of dopamine, it cannot produce it by itself. At this stage, cocaine dependency can form, leading to a regular abuser of the drug experiencing depression, anxiety, and irritability when they don’t have the drug. Not only this, they’ll experience constant cravings for cocaine. For this reason, individuals will continue abusing cocaine to self-regulate their pleasure and happiness and to avoid withdrawal symptoms. This alters the motivation and reward circuitry in the brain, and the person will take more and more to experience these feelings, potentially leading to an overdose.

Seek Help for Someone Having an Overdose

Many people are afraid to call 911 if they are in the presence of illegal drugs. However, calling for help if you suspect someone has overdosed on cocaine could save their life.

Many states have laws in place to protect those who call in an overdose or attempt to help someone who is overdosing.

The most important thing you can do if someone is overdosing is call 911. The DEA says that doing nothing could result in the person dying or becoming injured. When calling for help, be ready to provide information, such as: 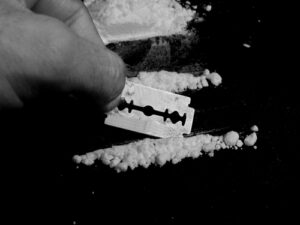 This information will help professionals address the overdose better.

As you wait for help, the 911 dispatcher may also instruct you to help until the paramedics arrive.

They may ask you to check the person’s pulse or breathing or to move them onto their side if you can.

Try to stay calm and follow their directions closely.

As soon as emergency dispatchers arrive, they will take over.