Alcohol Overdose – Symptoms, Effects on the Body, and Risk of Death

The idea of an “overdose” is something that is typically associated with drugs, whether it’s prescription medication like painkillers or sleeping pills or illicit substances such as heroin or methamphetamine. Many people do not think of overdoses in relation to drinking too much alcohol.

However, it is absolutely possible to overdose on alcohol, also known as alcohol poisoning. It is not something to be trivialized as just “drinking too much,” as it is as serious and potentially deadly as overdosing on the previously mentioned drugs.

What Is an Alcohol Overdose?

An alcohol overdose occurs when there is an excess of alcohol in the bloodstream to the point where the brain is unable to handle basic functions you typically never have to consciously be aware of, including heart rate, breathing, and body temperature control. During an overdose, these essential, life-supporting functions shut down.

The reason for this is that alcohol is what is known as a central nervous system depressant, which means just what it sounds like: the more you drink, the more alcohol “depresses” or slows down activity within the nervous system. It does this by targeting a neurotransmitter called gamma-aminobutyric acid (GABA) that the brain produces naturally to block nerve signals that cause stress and anxiety from reaching the brain.

This process is what helps keep you calm, and when alcohol stimulates the brain’s GABA receptors into overproduction by mimicking GABA to activate them, it overwhelms your central nervous system with GABA. This is why alcohol use causes feelings of lowered inhibitions, relaxation, and sedation. The excess GABA can also cause impaired movement, slowed breathing, irregular heart rate, and a lack of automatic response to things like choking.

What Are the Symptoms of Alcohol Overdose?

Some alcohol overdose symptoms can be surprisingly subtle and difficult to differentiate from intoxication. The more noticeable symptoms of alcohol overdose are much more likely to be deadly and a sign that the overdose has gone unchecked for a dangerously long amount of time.

The symptoms of alcohol overdose include:

If you observe these alcohol poisoning symptoms in someone, it is imperative that you seek emergency medical care as soon as possible. You will need to be prepared to tell a hospital when the person overdosing was drinking, what they drank, and how much.

While the obvious answer to this question would be that alcohol overdose is caused by drinking too much in one sitting, the truth is that an overdose is what happens when you drink more alcohol than your body can safely process. If you are wondering how much alcohol does it take to overdose, the answer to that changes, depending upon the individual. This can be true for adolescents and young adults under age 21, who are legally too young to drink. Someone can overdose on an amount of alcohol that barely gets another person drunk. Much depends on a person’s tolerance of alcohol, which can increase with chronic drinking.

Underage drinkers tend to drink too much alcohol when they do drink, more than adult drinkers do, which can lead to alcohol poisoning.

Per the National Institute on Alcohol Abuse and Alcoholism (NIAAA), thousands of college students go to the emergency room every year for alcohol poisoning. Per the organization, the first six weeks of a student’s freshman year in college are a vulnerable period. Heavy drinking and alcohol-related incidents are more likely to occur during this time due to academic stress and social pressures. In general, however, drinking large amounts of alcohol is dangerous for anyone and can lead you to overdose on alcohol.

What Happens When You Drink More Than Your Body Is Capable of Processing?

Your liver is responsible for metabolizing alcohol, but it is only able to handle so much alcohol at once, so what the liver is unable to break down instead gets redirected throughout the body. At this point, the small intestine and the stomach will rapidly absorb the excess alcohol, which will then enter your bloodstream. The more you drink, the less your body is able to break down in an efficient manner, and alcohol begins to build up in your bloodstream.

Alcohol takes much longer to leave your body than it does to be absorbed by it. This means that you can consume a potentially fatal amount of alcohol before passing out, which is the point that many people associate with drinking too much.

Even once you have passed out and stopped drinking, your stomach and intestine are still releasing alcohol into your bloodstream, causing your blood alcohol level to continue to rise. This is part of why it is extremely dangerous to assume that someone who has drunk to the point of unconsciousness will be fine just “sleeping it off.”

So what’s the difference between drinking “too much” and drinking more than your body can process? Well, “too much” alcohol is an extremely vague idea. How does “too much” translate between beers, mixed drinks, wine, or straight liquor? Eight beers and eight gin and tonics are certainly not created equal.

But the more important distinction is that while four beers, for example, may not seem like “too much” alcohol to someone, depending on a whole host of factors, it might be more than their bodies are capable of processing. Some of these factors that play a role in someone’s risk of overdosing on alcohol include:

There is definitely an amount of alcohol that would cause anyone who drank it to experience an overdose, depending on someone’s age, gender, height, weight, health, and more. But, the amount of alcohol they can safely process is going to vary hugely in comparison to someone else.

Do not assume that just because someone else can drink a certain amount of alcohol safely that you can drink the same amount without the risk of an alcohol overdose.

Can You Die From an Alcohol Overdose?

The short answer is yes, if alcohol poisoning goes untreated it can all-too-easily become fatal. In fact, roughly six people die as a result of an alcohol overdose every day. 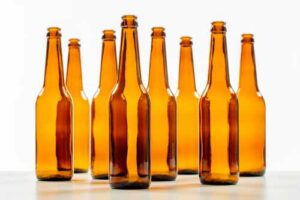 Alcohol’s depressant effects include slowing or blocking signals to the brain that control automatic responses, essentially causing your body to shut down if you have drunk enough alcohol.

One of the most common ways someone dies of an alcohol overdose is by having their gag reflex, one of these automatic responses, suppressed.

At first, this may not seem like a major issue, but part of the reason that many people who overdrink vomit is that alcohol irritates the stomach.

If someone has drunk to the point of passing out, as their stomach continues to absorb alcohol they have an extremely high chance of vomiting and, without their gag reflex, are extremely likely to choke on their vomit and die from asphyxiation.

Other potentially deadly complications from an alcohol overdose include the previously mentioned seizures, as well as:

Even if you do not fatally overdose on alcohol, experiencing alcohol poisoning can still have catastrophic, potentially permanent effects that can cause serious future health problems. People with chronic alcohol problems can develop several chronic conditions, such as cancer, heart disease, and memory impairment. Chronic blackouts could signal brain damage after drinking alcohol at levels that are too high for the body to process.

The only way you can go about “curing” alcohol poisoning, or treating it, rather, is receiving supportive medical treatment while the body rids itself of the alcohol, per Mayo Clinic. This means you should be carefully monitored in a healthcare facility where medical professionals can administer therapies you will need, such as oxygen therapy. Other alcohol overdose treatment involves administering fluids intravenously (IV) so that you don’t become hydrated. You also may need vitamins and glucose so that you can avoid the most serious complications of alcohol overdose. At this point, you must avoid alcohol by all means necessary.

Per Cleveland Clinic, healthcare providers can pump the stomach of a patient who has overdosed on alcohol. This process helps clear the stomach of toxins from the substance. Alcohol affects all parts of the body, including the kidneys. If a patient’s kidneys are working properly, healthcare providers can start dialysis to filter out alcohol from the blood, Cleveland Clinic advises.

Since you can die from alcohol abuse,  you should seek professional help immediately if you have suffered an overdose. Call 911because alcohol poisoning is an emergency. You should aim to keep the person awake and have them sip water if they can. This will keep them hydrated.

You can also give them a blanket to keep them warm. Hypothermia, or having a lower body temperature than normal, is a side effect of alcohol poisoning. It is important you prevent the person from choking. If the person is unconscious, turn them on their side so that they won’t choke on their vomit.

The Mayo Clinic warns that trying home remedies will not help you combat alcohol overdose. The effects of an alcohol overdose can’t be reversed, and there are “do it yourself” actions that could worsen your condition.

Some of these “remedies” include:

Sleeping after drinking too much alcohol: This is dangerous because you can lose consciousness and never wake up again

Drinking caffeine: Mayo Clinic advises that a caffeinated beverage, such as black coffee will not counteract the effects of an alcohol overdose.

Taking a cold shower: Instead of waking a person up, it can send them into shock and cause them to lose consciousness.

Walking it off after having too much to drink: Contrary to this myth, this does not make alcohol leave the body faster.

Are You Struggling With an Alcohol Use Disorder?

If you are unable to control how much alcohol you drink once you start or if you have seen this behavior in someone you care about, it is a clear sign of an alcohol abuse, and it is vital you seek professional addiction services. Alcohol is dangerous, and detox must be taken into consideration before stopping.

Medically assisted withdrawal is a type of planned detox that uses medications to alleviate the severity of symptoms associated with alcohol withdrawal. The severity of your alcohol use disorder will determine how much medical assistance you require to detox safely. The medical experts or substance abuse professionals at formal detox programs can determine how much medical intervention you need and provide you with individualized care based on the symptoms you have.

In addition to prescribing medications to treat uncomfortable symptoms, detox programs provide continual monitoring of your mental and physical status. Because the symptoms of alcohol withdrawal can present suddenly or unexpectedly get worse, being under close medical supervision during this time is highly recommended and greatly improves your safety.

With top-notch facilities staffed by expert teams of doctors, clinicians, therapists, and more, Delphi Behavioral Health Group can help you find the best treatment program for you or your loved one.