In the 20th century, the idea of addiction as a moral failing has given way to the knowledge that it is actually a complex and progressive brain disease. The phenomenon of the disease of addiction can be clearly seen in sedative dependence. Sedatives are used to treat serious and widespread ailments, but they have a high addiction potential when they are used longer or more frequently than advised. When that happens, though chronic, addiction is treatable.

Keep reading to learn more about sedative addiction, how it works, and how it can be treated.

What is a Sedative?

Sedatives are a class of drugs used for their relaxing and hypnotic effects. Many are used as sleep aids and several are used for other properties like anti-anxiety effects and as muscle relaxants. Most sedatives work as GABA receptor agonists, which means they bind to and activate a receptor in the brain that’s responsible for the natural production of anxiolytic (anti-anxiety), anticonvulsant, hypnotic, and euphoric effects.

The History of Sedative Use

Insomnia is a fairly common sleep disorder that occurs in 1 in 3 three people. Wide use of psychoactive substances to treat sleeplessness started when barbituric acid was first synthesized in 1864. Barbiturates were used for decades until they were discovered to cause extreme behavioral disturbances, addiction, and dangerous withdrawal symptoms. In the 1950s, as people were starting to notice the dangerous effects of barbiturates, a new sedative was synthesized called benzodiazepines. Barbiturates have largely been replaced by benzodiazepines, or benzos.

Benzodiazepines grew in popularity throughout the 1960s and 70s. Drugs like Valium (a benzo), meprobamate (a minor tranquilizer), and sodium butabarbital (a barbiturate) were heavily marketed toward women, especially mothers. The marketing campaigns and drugs were controversial because they were seen as medicating otherwise healthy women. The ads, inspired the Rolling Stones song Mother’s Little Helper, seemed to criticize the phenomenon. However, by 1977, benzos were the number one most prescribed drug in the world.

Benzodiazepines produce many of the same effects as barbiturates but supposedly produce fewer negative side effects. However, benzos also have a high potential for dependence. Most are used for therapeutic use but if they are taken longer than a month they can make insomnia symptoms worse, as your brain’s tolerance grows.

Benzo withdrawals can also be potentially deadly, causing a condition called Delirium tremens, which can produce seizures, catatonic state, coma, death, or other medical complications. People who have become dependent on benzos or barbiturates are encouraged to seek medical treatment when they are attempting to quit. It could be potentially dangerous to quit suddenly, because it would be more likely to cause serious side effects.

Today, non-benzodiazepine drugs are growing in popularity, partially because the addictive potential of benzos is starting to become noticed. A group of non-benzos called “Z-drugs” are the most commonly used alternative sedative. Z-drugs also act on the specific GABA receptor to produce hypnotic effects. Z-drugs emerged in the 1980s and have grown in popularity over the past few decades. However, they, too, can cause tolerance, dependence, and addiction. In withdrawal, they can also cause symptoms similar to benzos, which can be dangerous.

Non-benzodiazepines are seen as safer alternatives to benzodiazepines. Benzos come with uncomfortable side effects, high addiction potential, and dangerous withdrawal symptoms, particularly when they are used incorrectly. Some believe that Z-drugs offer many of the same rewards while lowering the chances of experiencing negative side effects. However, there is little to no evidence to suggest that Z-drugs and benzos have a significant difference in effectiveness of side effects at all.

In the brain, benzodiazepines and Z-drugs are similar in the way they affect neurotransmission. Both attach to GABA receptors and excite the release of chemical signals that cause relaxation, anti-anxiety, and sedation. 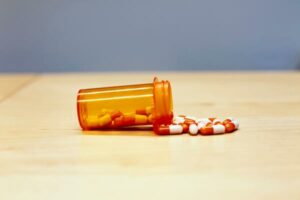 Most sedatives have a moderate to high addiction liability. They work very similarly to benzos, which tend to have high addiction rates. If you believe you might be beginning to develop a dependence on sedatives, there are a number of warning signs that may present themselves. The most common telltale sign is craving the drug if you haven’t used it in some time. If you’ve tried and failed to cut back or stop the use of Z-drugs because of cravings on uncomfortable symptoms, you might be chemically or psychologically dependent on the drug. Other symptoms include

How to Recover from Sleeping Pill Addiction

Though addiction is a chronic disease of the brain, treatment is available and effective for many people. There are a variety of therapeutic and medicinal options to help you get safely through withdrawal and recovery. Though the risks are lower, because sedatives are among the class of drugs called central nervous system depressants, they are capable of causing potentially dangerous symptoms in withdrawal. If you have been using sedatives for a significant amount of time and you have tried and failed to quit before, your brain may be dependent on the drug to maintain balanced brain chemistry.

If you stop suddenly, the nervous system suppressing effects of the drug will be quickly removed and your brain will not be prepared to counteract the rebounding symptoms with its own natural chemicals. As a result, your nervous system may become overactive. This typically results in anxiety, insomnia, and irritability. In rare cases, Z-drugs can cause seizures and psychosis like barbiturates and benzodiazepines. Without treatment or medical intervention, these symptoms can be deadly.

To avoid dangerous side effects, the safest way to break chemical dependence on sedatives is with medical detoxification. Detox is often the best first step in addiction treatment for multiple reasons. For one, in detox you will have medically trained professionals with experience in addiction treatment that will be on-site 24 hours, managing your care. They can use medicinal therapies to counteract uncomfortable symptoms and avoid serious medical complications.

Finally, sedative withdrawal commonly comes with powerful drug cravings that can cause people attempting to stop using to relapse. Cravings combined with painful symptoms make using the drug again difficult to resist. In a detox program, you will have 24 hours of support and accountability every day. When you have a week moment during your detox process, you will have supervision to help you avoid relapse.

Because addiction is a chronic and progressive disease, clearing your system of the drug and allowing your brain chemistry to return to normal sometimes isn’t enough. When a drug is abused, your brain may learn to crave it in times of stress, anxiety, depression, or discomfort. This is especially likely when a drug causes euphoric effects.

To avoid relapse in the future, it is often necessary to go through addiction therapies to learn coping skills and explore the potential roots of addictive behavior. In some cases, addiction is caused by underlying mental illnesses or unresolved traumas. To treat the disease of addiction, underlying issues need to be resolved. Plus, if you initially used sedatives to treat anxiety, there may be alternative medications and therapies available in treatment might be able to help.

Start Your Road to Recovery Today

If you or a loved one has become dependent on a sleep-aid or sedative, it’s important to seek help as soon as possible. The more your tolerance grows, the more your brain and body may be dependent on the effects of the drug. If you are taking them to alleviate insomnia, sleeplessness may actually get worse as your brain gets used to the drug. Plus, if you quit too suddenly, you may experience some of the life-threatening symptoms of withdrawal that can happen in drugs that agonize GABA receptors.