Snorting vs. Smoking Cocaine: How Each Affects the Body

Cocaine is a drug that can be ingested in a variety of ways, including by snorting, smoking, or intravenous injection. The chosen method of ingestion can have different effects on the body, including how rapidly it enters the bloodstream and how it affects different systems in the body.

Cocaine is a highly addictive substance that binds to the reward and pleasure sensors in the brain, creating a positive association for the substance. The areas of the brain most impacted by the drug include sites that have dopamine synapses where cocaine binds. Dopamine is a neurotransmitter that facilitates pleasurable feelings.

Can You Smoke Cocaine?

Cocaine is usually purchased as a powder or crystals. It’s most commonly snorted, but what happens when you try to smoke it? Cocaine, in its normal crystal-powder state, is hard to burn. Smoking anything requires combustion to produce the smoke that is then inhaled. However, heating powder cocaine doesn’t usually lead to a flame. When law enforcement seizes and disposes of cocaine, it is burned in incinerators that can reach 1500 degrees Fahrenheit. That much heat is enough to burn away cocaine, but you won’t be able to achieve those temperatures with a lighter.

Before users can smoke cocaine, it must be converted to its freebase form, which is commonly called crack. “Freebase” is a term in chemistry that refers to the chemical compound structure of an alkaloid like cocaine or nicotine. Turning cocaine into freebase form means it is converted from an acid form to an amine form. While this all sounds like complex chemistry, converting cocaine into its freebase form is done all the time by drug dealers and users. Converting cocaine to crack can be done by treating the drug with a basic chemical like baking soda. Crack turns powder cocaine into solid flakes or rocks that can be more easily burned and smoked.

Can You Snort Crack?

Crack and cocaine are essentially the same drugs in different forms. While they sound like different substances, they create the same stimulating effects on the body. However, their physical consistency and the way a person takes them are different. The difference between these two forms primarily affects how cocaine enters the body. Cocaine is smoked because it can be ground into a fine powder. Crack can be broken up and crushed, which means you could snort it. But when it is snorted, it will take longer for crack to reach your bloodstream than when it’s smoked. For that reason, crack is usually smoked to achieve a faster high. But crack can also be converted back to powder cocaine by treating it with an acidic solution like lemon juice.

The Impact of Snorting Cocaine

Snorting cocaine in its hydrochloride salt form has historically been the most commonly used method of ingestion. This results in a high that can last from 15 to 45 minutes.

People typically snort cocaine by snorting individual lines or smaller bumps of powdered cocaine. The person sniffs the substance up into the nose through one nostril and then often alternates nostrils.

When cocaine is snorted, it must travel from the nose to the heart through the blood vessels before then being pumped to the lungs where it becomes oxygenated. The substance then travels back to the heart before being pumped out to the rest of the organs in the body as well as the brain.

Snorting cocaine can cause several side effects specific to the method of ingestion, including:

The Impact of Smoking Cocaine

Cocaine can be processed into freebase so that it can be smoked by converting the powder form to cocaine sulfate. The rock form of cocaine that can be smoked is commonly referred to as “crack cocaine.” This form is processed using baking soda and heat until a rock is formed that can then be smoked.

Smoking the drug affects the brain more quickly than snorting. When cocaine is smoked, it goes directly into the lungs to be oxygenated rather than having to travel through the blood vessels to the heart first. Oxygenated blood can then go directly from the lungs to the heart and brain.

The high achieved by smoking cocaine also dissipates quickly, so individuals may want to quickly use another dose to maintain the original high. The high from smoking rock cocaine lasts about 10 to 15 minutes. This is why people can end up smoking large amounts of cocaine in a short period.

Smoking cocaine also creates a more intense high in the person using the substance. Because it is more concentrated, the intensity of the high is elevated; this further contributes to the addictive qualities of the substance.

Smoking Cocaine Can Also Have Several Unpleasant Side Effects, Such As:

All of these effects result from damage to the respiratory system caused by the inhalation of cocaine directly into the lungs.

Why Do People Snort Cocaine?

Introducing a drug to your body by snorting it is called insufflation. It can be an unpleasant means of administration. Snorting can cause redness, irritation, and a burning sensation in your nostrils. Chronic snorting can lead to infections, inflammation, blocked nasal passages, and a loss of your sense of smell. So why do people bother snorting cocaine?

Your nasal passages are lined with soft, thin tissue that’s full of blood vessels. Snorting a chemical can cause the drug to be absorbed into the bloodstream very quickly through this tissue. Snorting often provides an extremely quick high. Snorting cocaine can cause you to experience the effects immediately. But, while the high comes on quickly, it also wears off quickly. Because cocaine wears off quickly, snorting may encourage binge use, which is when users take multiple doses in a row.

Is Smoking or Snorting More Addictive?

With any drug, the probability of addiction is increased when the drug reaches the brain faster. The reward and pleasure centers are highly stimulated, and the brain creates positive reinforcement for the substance of abuse. The faster this stimulation happens, the quicker addictive cycles set in and the greater the likelihood of abuse. 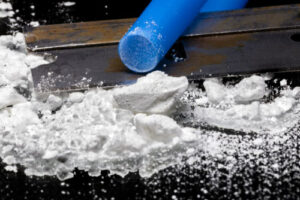 Forms of cocaine that can be smoked are more concentrated. They are associated with higher chances for addiction and more severe dependency.

A study published in the journal Experimental and Clinical Psychopharmacology found that people who snorted cocaine had better treatment outcomes than those who smoked cocaine. People who used cocaine intranasally remained in treatment longer and trended toward longer periods of sustained abstinence.

This does not mean that powdered cocaine is a safe alternative to smoked cocaine.

The study also found that despite better treatment outcomes in some areas of measurement, these users still experienced the same severity of problems in other areas of their lives.

Cocaine addiction treatment will be similar regardless of the method of ingestion. Many people who use cocaine may use multiple methods of ingestion, and they may also have polysubstance dependence.

Individuals with a dependency on cocaine may experience unpleasant withdrawal symptoms, such as:

Fortunately, many of these symptoms can be reduced or managed with an appropriate detox protocol that is designed for each individual, according to their specific treatment needs. After detoxing from cocaine, ongoing substance abuse therapy is recommended to ensure long-term success in recovery.