What to Do When Your Spouse Has an Addiction

A person who is not the spouse of someone with an addiction may wonder how someone who is could fail to immediately notice their partner’s problems with drugs or alcohol. But the truth is that addiction is not something that happens all at once. In fact, there will often be many small signals that there is something wrong if you are not specifically looking for telltale signs of an addiction.

Without the value of hindsight, it can be difficult to put the pieces together until the addiction has progressed to the point where it can no longer be concealed. This scenario, however, is also not always the case when it comes to a spouse’s addiction. There are, generally speaking, three common ways that someone can find themselves the spouse of an addicted person.

The first is the one that most likely comes to someone’s mind when they think about having a spouse who is struggling with addiction, where it is not until after you have been married that you find out that your partner has managed to conceal their addiction. Discovering the extent of a problem you didn’t know existed can be an intense shock, but a spouse who is struggling with addiction becomes, often by force of habit, skilled at hiding their issues with substance abuse from others, even those closest to them.

The second way in which someone becomes the spouse of an addicted person is a slow process that begins with social drinking that becomes nightly trips to a bar, and then they find that they are unable to stop. Or your spouse might need to undergo surgery and be prescribed pain medication for their recovery only to grow dependent on them and eventually addicted.

Finally, many people are actually already aware when they get married that their partner has had issues with drugs or alcohol but is in recovery. People in recovery are often able to successfully maintain sobriety for years, but they are still susceptible to the possibility of relapse.

In the end, it doesn’t really matter how someone ends up the spouse of a person struggling with drug or alcohol abuse. What does matter is identifying the problem and understanding what steps need to be taken next to best help your spouse, and that starts with recognizing the signs of substance abuse.

Recognizing The Signs Of Addiction In Your Spouse

It is important to keep in mind that each couple is unique, as is each individual’s addiction, so one person’s spouse that is abusing drugs or alcohol may not be doing it in the same way as someone else’s spouse. That being said, various general behaviors can act as red flags to a growing substance use problem, including:

When someone becomes dependent on drugs or alcohol, it can become the controlling force behind all of their decisions and can cause drastic personality changes. When under the influence or struggling with the symptoms of withdrawal, your spouse can say or do things they never normally would, which can be difficult to deal with, almost as if the person you married has disappeared.

What About Alcohol Addiction in Your Spouse?

There are a variety of marital problems that can be caused by things that relate to alcohol without actually involving an alcohol use disorder.

If your spouse spends too much time at bars and clubs with friends, it can cause some resentment without slipping past the boundaries of normal social drinking. However, they may begin abusing alcohol before they meet the qualifications for dependency or addiction.

Alcohol abuse has its own dangers and concerns. It can lead to alcohol poisoning, a variety of health risks, and accidents caused by intoxication. If a person is under 25-years-old and engaging in frequent binge drinking over a long period of time, it can cause cognitive issues and stunted brain development.  Alcohol abuse can lead to alcoholism when tolerance builds and chemical dependence develops. According to the National Institute on Alcohol Abuse and Alcoholism, 11 signs point to an alcohol use disorder (AUD) that you could potentially notice in your spouse. Generally, they have to do with drinking cravings and being unable to cut back or stop using alcohol.

Another telltale sign of an AUD is drinking alone at odd hours. It’s a major red flag if a spouse requires a drink to start the day. Alcohol’s half-life usually means it is significantly reduced after five to eight hours. This will cause a person who is dependent to start feeling withdrawal symptoms in the morning, after a night of drinking.

The National Institute on Drug Abuse (NIDA) defines addiction as compulsive drug-seeking despite harmful consequences. If alcoholism has led to health problems, issues at work, or put a strain on your relationship, and your spouse continues to drink, it can be a sign of alcohol addiction.

Is There Such a Thing as a Functioning Alcoholic?

The term functioning alcohol is often used in American culture and society. But is there really such a thing as a functional alcoholic? Alcoholism is marked by alcohol dependence and deep-seated chronic brain disease. Addiction, in general, controls your life, and your schedule is centered on avoiding withdrawal symptoms and maintaining your addiction. Plus, it usually progresses as your tolerance grows. You need more alcohol and to drink more often to stave off painful and dangerous withdrawal. While some people maybe be earlier on in the process, alcoholism is a complex disease. Even if it doesn’t seem debilitation now, it may become worse soon.

Plus, alcohol withdrawal can be potentially deadly. If your life is centered on having to find your next drink to maintain your addiction, what happens if you find yourself in a situation where you can’t drink? Things like surgeries, medical procedures, and pregnancies are complicated by the presence of alcohol in your system. It can also be difficult to travel safely while under the influence. If you are put in a position in which you don’t have access to alcohol, you can experience dangerous withdrawal symptoms like seizures and delirium.

Functional alcoholism may just be a distinction that points out that a person suffering from alcoholism is still in their early stages. However, there is no version of alcoholism that is safe and functional in the long term.

Dealing With A Spouse With An Addiction: What Comes Next?

Once it has become clear that you are the spouse of an addicted person, it is normal to feel lost and overwhelmed, as though there is nothing you can do. Fortunately, this is not the case, as there are many ways you can help your spouse, and there are also many resources available to provide help for the spouses of those struggling with addiction.

First and foremost, it is crucial that you and your spouse both acknowledge their addiction and the problems it is causing not just for your spouse but in your marriage and family as well. This is often done in the form of an intervention, where friends and family can both provide support and clearly illustrate how many people are affected by your spouse’s addiction.

While it is important to be clear and candid, it is also important to avoid tactics like making threats. Threatening your spouse with divorce unless they agree to stop using will, typically, not work. This is not meant to be an indication of their lack of love or commitment, but that their addiction has progressed to the point where they no longer have any control over their drug or alcohol use.

In fact, the stress, shame, and other negative feelings that accompany the threat of divorce will most likely only drive them to further abuse. Instead, it may be more helpful to emphasize how much you care about them and their wellbeing as an impetus for getting them into treatment. 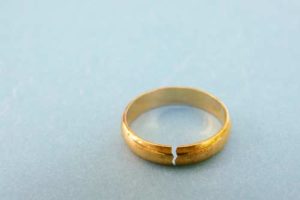 According to the American Association for Marriage and Family Therapy (AAMFT), domestic partnerships that involve a drug-addicted or alcoholic spouse create a cycle of conflict. In these instances, their substance abuse often leads to verbal or even physical conflicts, which start as a result of the spouse’s behaviors that are being driven by addiction and then lead to more arguments about the substance abuse itself.

If the couple attempts to deny that the problem is there or otherwise refuses to seek out therapy not only for addiction but also for their marriage, this cycle will only continue as addiction becomes the central focal point of all of the conflict within the marriage.

To break this cycle, both of these things need to be addressed, as issues within the marriage may have contributed to a spouse’s addiction.

Furthermore, addiction recovery treatment alone cannot fully heal the rift an addicted spouse’s behaviors may have caused within the relationship.

Many recovery treatment centers offer family and couples therapy as part of their overall addiction rehabilitation treatment programs. Therapies that focus on treating both members of a couple have been found to give the spouse in recovery a significantly higher success rate at maintaining their sobriety in the long term.

Some of the elements involved in Behavioral Couples Therapy include working to improve communication and problem-solving skills, creating a recovery contract that both partners can be held to, and learning caring behaviors on both sides that can lead to a more open and supportive home environment.

During the course of a spouse’s recovery, it can often be difficult to know how best to support them. We have a handy list of common do’s and don’ts to remember, which not only cover supporting an addicted spouse but also support for their spouses.

Addiction And Support Resources For Spouses And Partners

Al-Anon: One of the most well-known and respected 12-Step programs in the world, Al-Anon is a group open to those who had been affected by alcohol addiction, including not only spouses and partners but also children, parents, and friends.

Couple Recovery from Addiction: This support organization follows a holistic healing model of couple-based addiction recovery, focusing not only on the recovery of the addicted spouse but of the relationship as well.

Nar-Anon: The counterpart program to Al-Anon, Nar-Anon is a 12-Step support group for the loved ones of people with substance use disorders beyond alcohol.