Alcohol Poisoning: How to Tell, What to Do, and the Health Risks

In the current climate of the opioid crisis in the United States, overdose is a topic that is frequently discussed usually only in the context of illicit drugs like heroin or prescription medications like sleeping pills or painkillers.

However, many people do not associate the concept of overdosing with drinking alcohol, but that’s exactly what alcohol poisoning is: an overdose. Binge drinking to the point of passing out is often trivialized as just “overdoing it,” especially in comparison to overdosing on a substance like heroin. But alcohol poisoning is just as serious and the results can be just as deadly if it is not treated soon enough.

Being able to tell if someone has alcohol poisoning and knowing what to do is vital to being able to help save their life and avoid having them become one of the 88,000 people a year in the United States that die from alcohol-related causes.

What Is Alcohol Poisoning?

The simple answer is that alcohol poisoning is often the result of drinking too much during a single period of time. However, the important thing to remember is that “too much” is different for everyone, varying based on age, gender, body size, tolerance, and also what you happen to be drinking.

So, more specifically, alcohol poisoning is what occurs when you drink more alcohol in one sitting than your body is capable of processing.

But what does that mean? Your liver is the organ in charge of metabolizing the alcohol that enters your body, but it is only able to handle so much at once, so the excess alcohol that the liver can’t break down instead gets redirected throughout your body. When that happens, your stomach and small intestine start to quickly absorb all of this excess alcohol, sending it into your bloodstream, where it will begin to build up the more you drink.

Alcohol takes significantly longer to leave your body than it does to be absorbed by it, which means you can end up consuming enough alcohol to poison yourself well before you pass out, which is typically the signal for people that someone has drank too much.

So even after you pass out or stop drinking, your small intestine and stomach are still actively releasing unmetabolized alcohol into your bloodstream, raising your blood-alcohol level to the point where it can interfere with major organ function and put you at risk of a whole host of serious and potentially fatal complications.

This is because alcohol’s main effect as a depressant is slowing down or completely blocking certain nerve signals from reaching the brain, which is part of how drinking relaxes you. Unfortunately, some of these nerve signals control automatic bodily responses, which means that if you drink enough alcohol, it can literally cause your body to shut down.

Can Alcohol Poisoning Kill You?

Though it may at first be surprising, asphyxiation is one of the most common ways for someone to die from alcohol poisoning. Part of this is due to the fact that alcohol actually irritates the stomach, which is why people that overdrink or binge drink will often end up vomiting.

When you’re unconscious, there are still functions being carried out by your body such as automatic responses like breathing, heart rate, or regulating body temperature. Another automatic response is the gag reflex, which gets suppressed by alcohol.

Because this automatic function is being interfered with, when someone drinks to the point of unconsciousness and then vomits, their gag reflex will not kick in, and they can choke, asphyxiate, and die.

This is just one of many reasons that you should never leave someone who has drunk so much that they have passed out to “sleep it off” with the assumption that they’ll be fine.

How To Tell If Someone Has Alcohol Poisoning

Part of what makes alcohol poisoning so dangerous is the fact that many of its symptoms can be hard to differentiate from what you would normally recognize as regular intoxication, including confusion, vomiting, slowed breathing and reaction times, and being in a general stupor.

However, the more noticeable the symptoms become, the more likely it is that the individual’s alcohol overdose has gone untreated for a length of time that is potentially life-threatening.

Some of these more deadly symptoms include hypothermia, a bluish tint around someone’s lips and fingertips, seizures, irregular breathing or dangerously slowed breathing, which is typically categorized as eight breaths a minute or fewer.

Finally, if you are unable to wake someone up after they have lost consciousness from drinking, there is a high likelihood they have slipped into a coma, which can lead to brain damage and total organ shutdown from lack of oxygen. 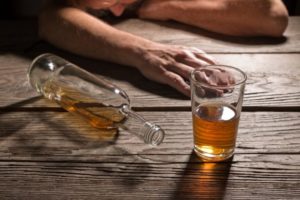 How To Help Someone With Alcohol Poisoning

If you suspect that someone has succumbed to alcohol poisoning—even if you do not see all of the typical signs and symptoms—you should still seek out medical services since it could mean the difference between life and death.

The best thing you can do to help someone with alcohol poisoning is to call 911 immediately. While waiting for emergency services to arrive, do not leave this person alone, even if they are still conscious. It is important to try and keep them awake for as long as possible until help arrives.

If they are vomiting, try to help by keeping them upright. If they need to sit, try to keep them sitting up. If you cannot keep them from lying down, make sure they are not in a position where they could potentially choke on their vomit and make sure their head is turned to the side.

Afterward, when they are no longer intoxicated and have received medical treatment, another way to help someone is to have a frank discussion with them about their drinking and how it is putting their life in danger.

Helping someone seek out recovery services for alcohol abuse is important and could save their life in the long run, but when they are in danger in the short run, getting them medical attention is the priority.

If you find yourself drinking to the point of alcohol poisoning or being unable to control how much you drink once you start, or you have seen this behavior in a loved one, it is a sure sign of an alcohol use disorder and should seek out professional addiction services as soon as possible.

Delphi Behavioral Health Group can get you connected to all of the addiction recovery resources you need. With facilities staffed by expert teams of doctors, clinicians, therapists, and more, we’ll help you find the treatment program that will best fit your needs or those of your loved one.