It is dangerous to mix Xanax with any substance of abuse, including cocaine. There is no way to combine these substances safely.

Dangers of Taking Xanax and Cocaine at the Same Time

Writer Katie Campisano wrote an essay about her experiences using Xanax and cocaine for The Muse. She was aware of her tendency to misuse substances and had previously experienced problems with alcohol but began to experiment with cocaine and Xanax.

She often took cocaine and then used Xanax to calm herself down after cocaine’s effects. Campisano also mentioned that she often took more cocaine afterward to counteract Xanax’s calming effects.

The combination of these two drugs is not a good idea. Xanax calms the central nervous system and produces a feeling of tranquility, which makes Xanax a downer. Some people may become addicted to this feeling of relaxation.

Even when Xanax is used as prescribed, people often build a tolerance for it. Others may become dependent on it, believing they need it to go about their day.

Not only does this increase the chance of misusing Xanax, but a person cannot stop taking it cold turkey. Xanax causes uncomfortable feelings of withdrawal, and some symptoms can be dangerous. It is best to have a doctor medically supervise a reduction in dosage (tapering).

Cocaine, on the other hand, is a stimulant, or upper.

As mentioned by the National Institute on Drug Abuse (NIDA), it increases dopamine when used. This floods a person with energy and makes them feel alert.

Dopamine that is released naturally can be recycled, but cocaine stops this natural process. Like Xanax, it can also build dependency and tolerance. A person who takes cocaine often may desire to increase their intake so that they can feel good.

Vice reports that mixing uppers and downers is bad for the heart. Additional research on adverse health outcomes related to Xanax and cocaine is still needed, but what is clear is that mixing drugs is an unwise decision.

Mixing Xanax with Other Substances

Xanax (alprazolam) is a widely known benzodiazepine meant to help people who have panic or anxiety issues. Its use requires a visit to a doctor’s office, where the physician will assess the patient and prescribe Xanax if it benefits them.

But Xanax and other benzodiazepines have gotten the public’s attention because they can be habit-forming and cause dependency. In addition, some individuals never obtain the right prescription, but choose to buy it unlawfully from friends who have a prescription, dealers, or online.

A person using Xanax for recreational reasons is doing so illicitly. The misuse of Xanax puts the person at risk of mixing it with other drugs, such as cocaine. 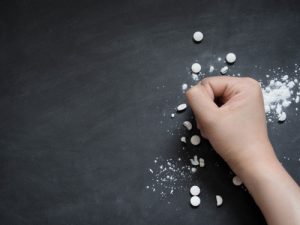 Another risk of illicit Xanax use is that a person may buy counterfeit medication, doses that are too strong, or pills that are mixed with something they are not prepared to take.

Not only that, but even under medical supervision, patients who take Xanax need to be careful about mixing it with other substances. Xanax can interact with a variety of prescription medications, alcohol, illicit drugs, herbal remedies, and even grapefruit.

Mixing drugs of any kind are unsafe. The best way to prevent an overdose or other health complications is to take Xanax as directed and abstain from mixing it with other substances.

A Vice article from January 2016 reports that it is common for people to take more than one substance at a time. This is called polysubstance abuse.

Below is a list of substances commonly mixed with Xanax.

The use of alcohol while taking Xanax could intensify its more dangerous side effects. It could even lead to blackouts and increase the chances of taking part in risky behavior.

The Fix says this combination of three medications is quite common. This combination could cause a slowdown in breathing that is difficult to notice.

This usually happens by accident, and it could happen with any drug in tablet form. Many dealers sometimes lace counterfeit Xanax with fentanyl or sell fentanyl pills masked as Xanax. On September 2018, police in Edmonton, Canada, confiscated fentanyl that was being sold as Xanax, as reported on CBC.

Cocaine is a stimulant, and some people are known to take Xanax (a downer) after a cocaine binge in hopes of winding down.

Is There A Safe Amount?

Mixing two or more substances is not safe. As mentioned in Vice, most people do not have the training necessary to understand when they are taking too much of something. Individuals may mix drugs because they want to “cancel out” some effects, but drugs do not work this way.

As such, there is no determined amount of Xanax or cocaine that can be mixed safely. If polysubstance abuse is a problem, it is best to get help from a doctor or treatment center.