Methadone is an opioid drug that is dispensed through opioid treatment programs (OTPs) to treat dependence and addiction. It takes a special certification to dispense methadone, and this is given by the Substance Abuse and Mental Health Services Administration (SAMHSA).

Methadone can be given in a wafer, pill, or liquid form to be taken once a day to manage opioid dependence. Brand names for methadone include Dolophine and Methadose.

As a long-acting opioid, methadone can remain active in the bloodstream for a day or two. Methadone also has pain-relieving properties, but the analgesic effects wear off after about four hours to eight hours. The U.S. Department of Health and Human Services (HHS) reports that in 2017, almost 11.5 million Americans misused a prescription opioid drug. These medications are powerful, and when misused, they can create a euphoric and mellowing high that is extremely addictive.

Most opioids of abuse, like heroin and the majority of opioid prescription painkillers, are fast-acting and don’t stay active in the system for more than a couple hours at a time. Methadone is different, and its long half-life makes it a beneficial tool for the medical management of opioid dependence. It can be used during detox as a substitute for other shorter-acting opioids and as a maintenance medication in recovery. Since methadone can keep opioid receptors active in the brain, it works to minimize drug cravings and difficult withdrawal symptoms that can be significant side effects of opioid dependence and addiction.

Methadone can be dispensed less often than other opioids and in lower doses, which can be a helpful part of an opioid addiction treatment program. The dosage can be slowly lowered over time to allow the body to process opioids out in a controlled manner. This gradual reduction can help to minimize withdrawal symptoms and episodes of relapse.

Methadone is still an opioid drug, however, which means that it can be misused. The drug should be dispensed through an opioid addiction treatment program where participants can be closely monitored. This ensures the drug is being used properly to minimize potential risks and side effects.

According to the National Survey on Drug Use and Health (NSDUH), more than 200,000 people in the United States misused methadone in 2016. 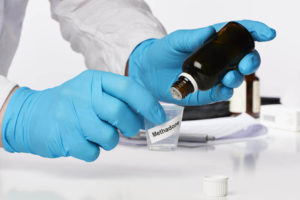 Methadone can be abused recreationally for its opioid high or as a method of self-medication, taking it in between doses of other opioid drugs to keep withdrawal symptoms at bay. It also can be abused as a method of trying to blunt the comedown from shorter-acting opioids.

Due to its scheduling, methadone must be administered by a trained health care professional under direct supervision. Since it is a full agonist opioid drug, methadone is in itself addictive, and even regular medical use can lead to tolerance and dependence. Sometimes, it is abused by those who have a legitimate prescription for the drug for medicinal purposes.

Specific signs that methadone is being abused include:

Overdose and Dangers of Misuse

The U.S. Centers for Disease Control and Prevention (CDC) reports that every day in the United States, more than 46 people die from an overdose involving a prescription painkiller. A potentially fatal overdose is one of the major risk factors of methadone abuse.

Methadone is a long-acting opioid that is stored in the body and brain for up to several days. The high is liable to wear off much more quickly, and this can encourage a person to take more or to take additional drugs to prolong the good feelings.

The journal Pharmacy & Therapeutics explains that after the analgesic effects wear off, methadone remains active in the bloodstream, and the respiratory depressant effects can peak later and keep working for a while. Part of what makes opioid drugs so dangerous is their affinity to slow respiration and depress the respiratory system, thereby affecting the person’s ability to breathe. During an overdose, breathing can become shallow or even stop altogether.

Pupils often constrict during an overdose. Body temperature drops, leading to cold, clammy skin and a bluish tint to the nails, lips, and skin. Blood pressure and heart rate are also depressed. Muscle flaccidity and weakness, tremors, nausea, and vomiting, drowsiness, extreme confusion, and loss of consciousness can also be symptoms of a methadone overdose. An overdose requires immediate medical attention and can be reversed with the rapid administration of the opioid antagonist drug naloxone.

Methadone works by binding to opioid receptors in the brain, which can block pain sensations and also increase levels of dopamine, hence the feelings of pleasure. Methadone also depresses the central nervous system, which in a sense helps to lower the stress response, but it also can overwhelm the system when the body can’t metabolize it fast enough, leading to a toxic buildup and overdose.

Mixing other central nervous system (CNS) depressants with methadone, such as alcohol, other opioids, sleeping aids, or benzodiazepines, greatly increases the risk for overdose. Since methadone is a mind-altering drug, it can elevate the odds for making poor choices that can lead to possible injuries, accidents, criminal or legal troubles, and other negative social, occupational, physical, and emotional hazards. The U.S. National Library of Medicine (NLM) reports that methadone can have the following side effects:

As an opioid drug, regular use of methadone can lead to tolerance. When methadone tolerance builds, a person will need to take more of the drug with each dose for it to keep working the same way. This is because methadone makes changes to the way the brain sends and receives its chemical messengers and alters its chemical composition. The brain then expects methadone to keep making these changes and will stop making, sending, and reabsorbing these neurotransmitters around the central nervous system in its normal fashion. The chemical structure of the brain is thereby altered by chronic methadone use, and dependence can be a common side effect of long-term use.

Drug dependence will make it difficult for the brain to find its normal balance without methadone. If the drug is stopped, withdrawal symptoms can begin. Methadone withdrawal can start within about 24 hours to 30 hours after the last dose, and it can include both physical and emotional symptoms, such as:

The prescribing information for oral methadone solution, published by the U.S. Food and Drug Administration (FDA), warns that use of the drug can also lead to serious heart arrhythmias and QT interval prolongation, a serious condition involving irregular and chaotic heart rhythms that can be life-threatening. The FDA explains that this condition is most often reported in people who take large doses of methadone every day for pain, but it can also occur in those who use methadone during opioid addiction maintenance treatment.

Since methadone acts on the levels of dopamine in the brain, which helps to regulate moods and feelings of pleasure, dopamine levels can drop during withdrawal. This can lead to intense drug cravings and trouble with feeling happy without methadone. It can then become hard to stop taking it, and drug use can become compulsive. 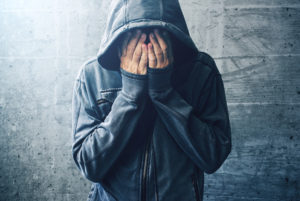 Addiction is considered a brain disease. One of its main indicators is a loss of control over the ability to decide how often, how much, and for how long the drug is taken. Individuals struggling with addiction may not mean to take as much methadone as they do, but often they are unable to stop once they start. Someone battling addiction may want to stop taking the drug, and may even make several attempts to do so, but they are unable to do so on their own.

Addiction can have a way of taking over a person’s life, and methadone users in active addiction will likely spend a lot of time and energy thinking about methadone, using it, trying to find ways to get it again, and then recovering from its effects. Because of the sole focus on the drug, other areas of life suffer, including relationships, work, and finances.

Sleep patterns and eating habits are often irregular as a result of methadone abuse, and personal hygiene may suffer. Weight can fluctuate drastically. Overall, a person battling methadone addiction doesn’t look good physically, and the individual also will struggle emotionally.

When a person struggles with addiction, they will continue to take the drug even when they know it’s going to have negative consequences. They will often use in situations that can be physically dangerous. Addiction can make it difficult for a person to think clearly and make logical decisions.

Getting Help for Abuse and Addiction

A specialized addiction treatment program is the optimal way to manage opioid addiction. As an opioid, methadone should be weaned out of the body safely. Medical detox programs will set up a controlled taper that will lower the dosage of methadone slowly over time to avoid cravings and withdrawal symptoms. Methadone can be used during opioid detox, or it can be substituted with buprenorphine, another long-acting opioid that is only a partial agonist and, therefore, has a lower potential for misuse.

In medical detox, the structured environment and around-the-clock medical monitoring can ensure safety and security while methadone processes out of the body. Medications for specific symptoms of withdrawal can be helpful to manage insomnia, pain, stomach upset, central nervous system hyperactivity, and mood swings.

Detox is the beginning of recovery, but it’s not enough on its own. Therapeutic, supportive, and medical treatments should follow to minimize relapse and encourage healthy recovery. Behavioral therapies, group and individual therapy sessions, and support groups are all integral parts of a complete addiction treatment program.

Adjunctive methods, such as mindfulness meditation, massage therapy, chiropractic care, simultaneous treatment for co-occurring disorders, creative expression therapies, and yoga, can also be beneficial components of a treatment program. Peer support groups like Narcotic Anonymous (NA) can provide encouragement, mentorship, and tips to minimize relapse and sustain abstinence. Addiction treatment is individual, and treatment coordinators can help families and individuals find the right program for them.