Adderall, a stimulant medication, is among the first-line options for treating attention-deficit hyperactivity disorder (ADHD). It’s a useful medication for the people who need it, and it’s a common prescription in the United States. However, this amphetamine drug can also be potentially addictive, especially when people misuse or abuse it.

Adderall addiction can lead to health problems, poor sleep, nutritional issues, and other serious consequences. If you’ve been using amphetamines like Adderall and feel you’ve developed a substance use disorder, you can learn more about Adderall addiction and your options for treatment here.

Adderall is a prescription drug primarily used to treat attention-deficit hyperactivity disorder (ADHD). It may also be used to treat sleep disorders like narcolepsy. Adderall is a brand-name medication that contains a combination of active substances, including amphetamine and dextroamphetamine. Both of these substances have stimulating effects on the central nervous system, which means they increase activity in the brain and body. The stimulating effects of the drug work to provide increased reward and motivation to people with attention problems. Stimulants can also increase wakefulness and alertness, which is why they may be used to treat narcolepsy.

Both of Adderall’s substances are active in the brain and can have stimulating effects on the central nervous system. Amphetamine works by increasing the activity of two chemical messengers in the brain: dopamine and norepinephrine. Dopamine is a neurotransmitter tied to reward and motivation. It encourages you to continue and repeat important activities. It’s thought that low dopamine levels may have a key role in ADHD symptoms. Increasing dopamine levels can help increase motivation and focus in people with the disorder. Norepinephrine has a role in increasing your heart rate and blood pressure, which can help increase blood flow and wakefulness.

According to the Food and Drug Administration (FDA), “Amphetamines have been extensively abused.” Adderall and other ADHD medications have a significant potential for misuse and abuse. The drugs may be abused for their similarity to common recreational stimulants like cocaine. Although they are much weaker than powerful illicit stimulants, amphetamines can produce a euphoric, exciting high. Adderall may be misused as a cognitive or performance enhancer since the drug can increase alertness.

Adderall is a federally controlled substance that’s classified as a Schedule II drug. That means the U.S. government considers it to have a high potential for abuse, even though it has accepted medical uses.

What Are the Signs of Adderall Addiction? 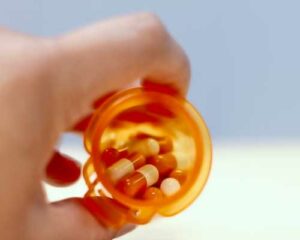 Addiction is a chronic disease affecting the part of your brain that’s responsible for reward. It’s a complex disease that can also come with other underlying causes and consequences like mental health disorders, social issues, and financial problems. Addiction can be hard to pick up on during its early stages, but it may quickly become difficult to hide. Addressing addiction quickly can help avoid some of the most severe consequences of the disorder.

The fifth edition of the Diagnostic and Statistical Manual of Mental Disorders (DSM-5) lists addiction as a substance use disorder (SUD). An SUD is further categorized based on its severity as a mild, moderate, or severe disorder. The DSM-5 has identified 11 common signs of addiction, and the number of those symptoms you experience can determine the severity of the disorder.

The DSM lists symptoms like tolerance, withdrawal, hazardous drug use, and neglect of obligations. Addiction can come with physical, psychological, and behavioral symptoms.

There are some signs and symptoms associated with stimulants, especially when it comes to acute intoxication. Stimulants cause increased activity in the central nervous system, which can manifest in physical and behavioral signs. Adderall can cause side effects like insomnia, dry mouth, loss of appetite, and weight loss. Side effects are more common and more severe when the drug is misused or abused. Someone who has been abusing Adderall may lose weight quickly and unintentionally. They may also develop a strange sleep schedule.

Withdrawal signs can occur when someone skips a dose, tries to cut back, or quits using Adderall after using the drug consistently for several weeks or months. Adderall can cause withdrawal symptoms like anxiety, depression, fatigue, increased appetite, lethargy, lack of motivation, sleepiness, and sleep disturbances.

What Is Involved in Adderall Addiction Treatment?

Adderall addiction can be a serious substance use problem, especially if it isn’t treated. Treating addiction involves a complex, personalized process that addresses multidimensional needs. The first step in treating addiction of any kind is to seek help from a doctor, clinician, or treatment program. Speaking to a professional can shed more light on what you need in addiction treatment and how to take your first steps.

Medical detox is a common first step for people seeking addiction treatment. It’s usually reserved for people who may go through dangerous or severe withdrawal symptoms. Unlike depressants, stimulants don’t usually cause life-threatening withdrawal. Withdrawal symptoms may include hypersomnia, depression, lethargy, fatigue, and sleep disturbances. In severe cases, stimulants can cause severe depression and thoughts of suicide.

You may go through a tapering process to avoid severe symptoms, but you may not need medical detox. Still, you should check with your doctor before quitting any prescription cold turkey. If you start to experience suicidal thoughts, speak to someone immediately. It may be a temporary symptom of withdrawal.

People with high-level medical and psychological needs in addiction treatment may need inpatient and residential treatment services. This setting may also help people who have medical conditions or complications and those with severe psychological problems. Residential treatment may be ideal for someone who has a high risk of relapse or other serious issues if they live on their own. Outpatient treatment is for people who can live on their own and attend treatment services during the day throughout the week.

Through each level of care, you’ll be going through a treatment plan that you make with a therapist’s help. This treatment plan will be personalized to your needs. It may include individual and group therapy sessions. Addiction treatment often involves behavioral therapies and other therapy options depending on your mental and behavioral health needs.

How Dangerous Is Adderall?

Adderall is a relatively safe drug to use, and it’s even used in children and adolescents. Like any prescription drug, it’s important to work with your doctor to determine if it’s safe for you to use, but many people with ADHD use it with minimal side effects. However, amphetamines can cause some side effects, including appetite loss, weight loss, nausea, sleep problems, and anxiety.

In high doses, these symptoms may become more pronounced. Stimulants can also increase your heart rate, blood pressure, and cause palpitations. These side effects may be dangerous in very high doses or in people with heart problems. Stimulants can also be dangerous or life-threatening when they are mixed with other substances. They can mask the effects of depressants and opioids, causing you to believe you can take higher doses. This can lead to a life-threatening overdose.

Long-term Adderall abuse could lead to some serious health risks. Since stimulants suppress your appetite, weight loss and malnutrition are common among longtime stimulant users. These drugs can also cause insomnia, which is associated with various health risks, including heart disease. They also cause impaired cognitive functioning and lead to more accidents and injuries.

According to the 2020 National Survey on Drug Use and Health (NSDUH), about 5.1 million people misused prescription stimulants in 2020. Young adults aged 18 to 25 misused prescription stimulants at the highest rate, with more than 4.8% of this population affected. That accounts for 1.6 million people. Young adults commonly use drugs like Adderall on college campuses as performance or cognitive-enhancing substances.

Stimulants may be used to increase wakefulness and retention during long-study sessions. It’s also thought that stimulants may improve cognitive performance, although there is little evidence to suggest that ADHD medications can improve cognition in people without ADHD.

In 2020, the United States saw record overdoses, with more than 100,000 overdoses on record. ADHD medications like Adderall aren’t typically associated with deadly overdoses, but they can contribute to substance use problems, which may increase your risk of serious medical complications like an overdose.