Prescription drugs like venlafaxine are used to treat mood disorders and anxiety. They can significantly help people dealing with mental health issues. They work by interacting with certain chemicals in your brain, especially serotonin, which is tied to positive mood and feelings of well-being. However, like many prescription drugs, mixing venlafaxine with other substances like alcohol can have negative effects. But are you allowed to drink while taking this drug? What happens if you mix alcohol and venlafaxine?

Learn more about venlafaxine and how it interacts with alcohol in your body.

Venlafaxine is a drug that’s used in prescription antidepressants. In the United States, it’s sold under the brand name Effexor. It’s in a class of drugs called serotonin-norepinephrine reuptake inhibitors (SNRIs), which work with important brain chemicals to ease depression and anxiety symptoms. It may also be used to treat panic disorders, social phobia, and some forms of chronic pain.

Along with selective serotonin reuptake inhibitors (SSRIs), SNRIs are often the first choices for people with common mental health issues, such as major depression and generalized anxiety disorder (GAD). Venlafaxine was first approved for medical use in 1993. Today, it’s available in generic forms and in extended-release formulations. In 2019, 17 million prescriptions of venlafaxine were written in the United States, making it the 40th most popular drug in the country.

Venlafaxine is effective in improving mood and anxiety disorders, but it also comes with common and uncommon side effects. Typical side effects include a loss of appetite, dry mouth, dizziness, sweating, and sexual dysfunction. These side effects are generally mild and well-tolerated. In many cases, side effects may appear when you start taking the drug but disappear as you get used to it.

What Happens When You Mix Venlafaxine and Alcohol?

What Happens When You Mix Venlafaxine and Alcohol? 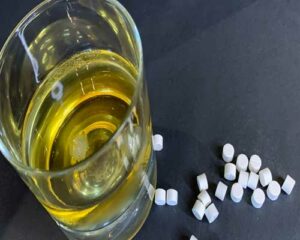 Whenever you’re taking a new prescription medication, it’s important to find out if you need to avoid other substances, especially alcohol. What if you mix alcohol and Effexor? What would happen? According to the Food and Drug Administration (FDA), alcohol has not been found to have a significant impact on the pharmacodynamics of venlafaxine. That means alcohol doesn’t interfere with the drug’s normal effects in the brain. The FDA also notes that venlafaxine hasn’t been shown to significantly increase alcohol’s impairing effects, such as motor skill impairment.

Although the drug has not been shown to interact with alcohol like other drugs, the FDA still warns that people taking venlafaxine should avoid alcohol. Why?

While the drugs don’t interfere with one another in these specific ways, they may combine certain effects in your body, particularly certain nervous system effects. Alcohol can enhance some of the effects of venlafaxine on your nervous system, making them stronger. These effects can cause symptoms such as:

However, there’s another reason you may need to avoid alcohol while you’re taking venlafaxine. The liver processes both substances. When you take venlafaxine, it’s metabolized in the liver, which means the chemical is broken down into other chemicals. Most of these chemicals are inactive, but one called O-desmethylvenlafaxine has antianxiety and antidepressant effects on the brain.

Drinking alcohol with venlafaxine may overwork your liver, increasing your risk of damaging it. If you drink to the point of liver disease, your body won’t be able to process venlafaxine as efficiently, and your doctor may need to work to adjust your dose of the drug for it to be effective.

Why Would Someone Mix Venlafaxine and Alcohol?

Why Would Someone Mix Venlafaxine and Alcohol?

Alcohol is often mixed with other substances for several reasons. In many cases, drugs are mixed with alcohol accidentally. Alcohol is a common part of socialization for many people. They may drink with friends regularly and consider it a part of their normal routine. A venlafaxine regime may also become a part of your routine if you’re taking it to manage mental health issues. If you start the prescription without paying attention to how it may interact with other substances, you may drink alcohol, not knowing it could interact with the drug. Others may be aware of some risks, but they may be unwilling to stop drinking once they start a venlafaxine regimen.

In some cases, alcohol is mixed with prescription drugs to increase the potential recreational effects of both substances. However, mixing venlafaxine and alcohol may not be an effective way to experience pleasant, euphoric effects. It may only increase some of the negative effects of the drug, such as dizziness and blackouts.

Finally, alcohol may be mixed with venlafaxine because of a previously existing alcohol use problem. Alcohol is a common substance used in self-medication. Self-medication is using drugs or alcohol to treat a mental health problem without consulting a doctor. People may drink to mask negative emotions, even if they don’t think they are drinking to treat their mental health issues. Self-medication can quickly lead to chemical dependence and addiction. If you start venlafaxine with an alcohol use disorder, it may be difficult for you to avoid using the substances together.

Venlafaxine and Alcohol and Internal Bleeding

Venlafaxine and Alcohol and Internal Bleeding

Antidepressants, including drugs like venlafaxine, can sometimes cause abnormal internal bleeding. According to the FDA, this may be caused by impaired blood platelet aggregation. Serotonin can interact with platelets, and drugs like venlafaxine can increase the levels of serotonin in your system. In some circumstances, higher serotonin levels can make it more difficult for blood to clot, which can lead to bleeding.

Alcohol can also have an effect on bleeding. It can work as a blood thinner, which can make bleeding worse if it occurs. That’s why you are usually told to avoid alcohol before surgery and while recovering from certain injuries.

When the two drugs are mixed, it can lead to serious internal bleeding. Potentially serious bleeding can occur in the brain and stomach when these two substances are mixed. You may also bruise more easily and experience nose bleeds.

If you’re taking venlafaxine to manage a mental health disorder like anxiety or depression, excessive drinking may worsen your symptoms. Alcohol can complicate many mental health issues, especially depression. Self-medication is common with alcohol because depressants can dull uncomfortable emotions. Alcohol is similar to other prescription depressants that are used to treat anxiety, and it has its own anxiolytic effects. However, alcohol also works to lower your mood, especially as your blood alcohol level starts to decrease. For that reason, alcohol can worsen:

Alcohol may also undermine medications you take to treat anxiety and depression. Drinking, especially in excess, may get in the way of effective treatment and slow down progress in treatment.

Getting Treatment for Alcoholism

Getting Treatment for Alcoholism

Treating alcohol use disorder (AUD) is essential if you are starting a prescription drug regimen and dealing with mental health issues. Alcoholism can feed into issues like anxiety and depression. As a depressant, alcohol can mask certain emotions in the short term, but it can ultimately lower your mood and worsen depression symptoms. Plus, substance use disorders can take over multiple aspects of your life, including your health, career, and your relationships with friends and family. Substance use problems will only add stressors to your life that make mental health problems ever more difficult to manage.

Treating alcoholism is essential in dealing with a mental health issue and taking prescription medications safely and effectively. The first step in dealing with a substance use disorder will be to ask for help. You may speak to your doctor or therapist to learn what your next step should be. In many cases, alcohol use disorders need to start with a tapering process or medical detox. Alcohol can cause potentially dangerous withdrawal symptoms, especially if you quit cold turkey. A detox program can help you get through withdrawal safely, addressing or avoiding serious symptoms like seizures.