In 2019 alone, high blood pressure was the primary contributing cause of death for half a million people in the United States. The costs were also astronomical, contributing to 131 billion each year from 2003 to 2014. Although uncontrolled high blood pressure is common, some groups are affected more than others. For example, men are diagnosed with the condition more often than women, at 50 percent and 44 percent, respectively. This pushes the number of Americans at risk of heart attack and stroke to unfathomable rates, and the death rate from high blood pressure continues to increase. Hypertension is considered the most common cause of cardiovascular-related deaths in this country.

While some medications can lower your blood pressure, other contributors to high blood pressure should be attempted before becoming reliant upon medication. An estimated one in five Americans gets the recommended amount of exercise, while a significant number of those eat poorly, which is a recipe for disaster. It’s in your best interest to get moving and eat better. However, speak to your doctor first before engaging in exercise. If this isn’t enough, there are medications available to get your heart in a safer zone — is Valium one of those? Does Valium lower your blood pressure? Below, we’ll discuss how diazepam affects your heart.

Valium is a widely administered and potent benzodiazepine drug used to ease tension and reduce anxiety in those with an overactive nervous system. Although stress isn’t linked to long-term high blood pressure, it can lead to temporary and sometimes dramatic spikes in blood pressure. If these spikes occur, they can damage your heart, blood vessels, and kidneys, similar to how hypertension affects your body.

Benzodiazepines are known to have hypotensive effects. In studies, volunteers given 5 mg (milligrams) of the medication had their vital signs taken once the drug took effect to check for changes in heart rate, blood pressure, muscle sympathetic nerve activity, and heart rate variability. The individuals exhibited decreased systolic and mean blood pressure, with an additional reduction in muscle sympathetic nerve activity. However, the heart rate did not change. The studies concluded there is a connection between Valium and blood pressure, but is it a sufficient means of treatment?

Benzodiazepines are highly addictive drugs that were never intended to be used long term. They often cause more adverse effects than positive ones, and those who are addicted face severe withdrawal symptoms when they try to stop. Let’s take a look below at what Valium means for your blood pressure.

Valium (generic name diazepam) is prescribed by doctors to treat anxiety and nervousness. It is a benzodiazepine, which falls into a broader class of drugs known as central nervous system (CNS) depressants. The medication has been used to treat alcohol withdrawal and specific types of seizures and acts as a muscle relaxant. As a CNS depressant, it inhibits the nervous system, slowing down the body when it doesn’t produce enough GABA to do it naturally. Valium is a drug that should only be used as prescribed by your doctor and never taken for longer than two weeks at a time.

How Does Valium Affect Blood Pressure?

How Does Valium Affect Blood Pressure?

Although Valium is effective in treating a panic attack, which could contribute to a temporary spike in blood pressure and heart rate, it’s not an effective long-term treatment. 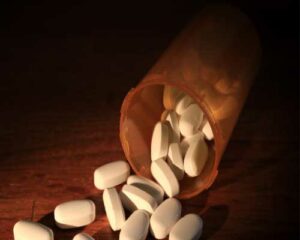 Essential hypertension activates the sympathetic nervous system and contributes to high blood pressure elevation. A study published in the American Journal of Hypertension found that hypertension is associated with general anxiety and major depressive disorders. Benzodiazepines are routinely prescribed for their anxiolytic properties, but they also decrease catecholamine uptake in specific regions of the brain. Anxiolytic medications like Valium are proven to assist in the management of acute blood pressure elevation in those without target organ damage.

One dose of a medication like Valium during blood pressure elevations is proven to help avoid unnecessary visits to the emergency room. They’ve also been shown to reduce blood pressure prior to a trip to the dentist for those who have issues with them. However, the long-term effects on blood pressure have yet to be examined thoroughly.

Hypotension, the opposite of hypertension, is something to think about before using a potent depressant like Valium, which causes a proven drop in blood pressure. You must discuss its use with your doctor first. Valium can worsen some side effects of hypotension, which can include the following:

These are similar to the effects Valium will produce. Valium can reduce your blood pressure considerably and potentially lead to death. Only you and your doctor can make the decision to determine whether the benefits outweigh the risks.

Beta blockers are routinely used to treat high blood pressure and heart issues. However, in some cases, doctors will prescribe them off-label for anxiety. Valium belongs to a completely different class of drugs, but its primary use is to treat anxiety. Medical professionals typically give beta blockers for short-term event-related anxiety, such as stage fright and social phobias. They don’t affect your emotional or psychological aspects of worry and stress. Valium is more like a sedative, but it’s OK to use during a panic attack or acute episode of anxiety.

Beta blockers, otherwise known as beta-adrenergic blocking agents, block specific neurotransmitters like epinephrine and norepinephrine from finding beta receptors on nerves that help dilate blood vessels. The result is a reduction in blood pressure and heart rate. Beta blockers were created to treat high blood pressure, while Valium is used specifically for anxiety.

Unlike Valium, beta blockers are not addictive, making them more desirable to treat hypertension. While Valium can be administered in the short term for sudden bouts of anxiety or panic attacks, it shouldn’t be considered as a treatment for long-term issues. Beta blockers should be the primary method of treatment if someone has heart disease. If you’re concerned someone has become addicted to Valium, professional help is the only option to overcome it. As was mentioned above, Valium withdrawal is a serious condition and should never be faced alone.

If you’re not a candidate for beta blockers and want to avoid the potential of becoming addicted to potent drugs like Valium, you can lower your blood pressure naturally. However, you must always speak to your doctor to determine if you’re healthy enough for certain activities like exercise.

Following an exercise and walking regimen daily is the most natural and efficient way to lower your blood pressure. It costs you nothing to take a block around the block, and health insurance will likely pay for some if not all of a gym membership. Regular exercise strengthens your heart and helps it pump more efficiently, resulting in lower pressure on your arteries.

Salt intake is one contributor to high blood pressure that we may fail to notice. It’s causing issues on a global scale. Lowering your intake can help with blood pressure issues.