How Long Will Opioids Show Up on a Urine, Saliva, or Hair Drug Test?

There are many reasons that you might have to undergo a drug test in your life, whether or not you have a history of previous drug use. In the midst of the country’s opioid epidemic, it is not only commonplace but also just good sense for these drug tests to specifically search for the presence of opioids.

Potential employers frequently make passing a drug test one of their conditions of employment, and both student and professional athletes will often be subjected to drug testing as part of their overall physicals.

If someone is involved in an accident in their workplace, drug testing will be used to determine if drugs were, in fact, a contributing factor to the situation. And if you are exhibiting behavior that corresponds with drug use, you can be tested under reasonable suspicion.

And yes, many people who have completed addiction recovery treatment can be regularly drug tested if they are in a sober living home or as part of their aftercare treatment.


How Long Do Opioids Stay in Your System?

A common characteristic of opioids is a short half-life, meaning that they leave your system fairly quickly. However, the exact timelines for how long a given opioid stays in your system and can be detected by an opioid drug test is going to vary based on both the opioid itself and the following factors:

Another key factor involved in how long opioids remain in the body has to do with how they are ingested.

If you are using prescription opioids such as Vicodin that comes in pill form, it means that it has to pass through your digestive system first before it can begin working, and will remain in your system longer. However, injectable opioids like heroin can get directly into the bloodstream where they work faster and leave the body sooner.

Nonetheless, if you have been chronically abusing heavy amounts of opioids for an extended period of time, then the levels of opioids in your system will have built up in your fatty tissue and are more likely to be detected in an opioid drug test even outside the typical window of time.

What Are The Different Types of Drug Tests?

According to the Substance Abuse and Mental Health Services Administration (SAMSHA), there are six main methods of drug testing. The most commonly used among those six, however, are urine, saliva, and hair. Each of these drug tests has its own benefits and disadvantages when it comes to detecting opioids in an accurate and timely manner. 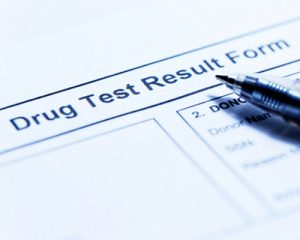 Urine drug tests are one of the most commonly used drug tests, as they provide quick results and are easy to administer.

A urine drug test can typically detect the presence of drug metabolites in urine for up to several days.

The one danger of urine drug tests is that sometimes they can trigger a false positive if someone is taking certain vitamin supplements or cough medicine containing codeine without realizing the impact it can have on their urine drug test.

This is much more likely to happen with an at-home drug test rather than one conducted in a professional medical setting.

However, the window in which a saliva drug test can detect the presence of drugs in someone’s system is typically more limited, usually between a few hours and a day.

Hair drug tests, which examine the levels of a drug in a person’s hair follicle, have several advantages over urine and saliva. A hair drug test is more accurate, as there is no way to tamper or alter the drug content present in hair with dye, bleach, or shampoo of any kind. Unlike urine and saliva tests, a hair drug test gives a bigger picture of someone’s drug use due to having a much wider window of time, typically at least a month.

However, hair drug tests can be impractical for regular use because, since hair grows so slowly, it can take several weeks for drugs to become present in someone’s hair follicles, and cannot confirm if they are currently using, just that they have been previously.


How Long Are Opioids Detectable in an Opioid Drug Test?

As previously stated, the length of time opioids remain in your system and show up in an opioid drug test will vary based on the test used, factors unique to you, and the opioid itself. With that in mind, the general lengths of time that these common opioids will show up on a test are as follows:

Heroin is a quick-acting drug with a very brief half-life, but its use will still show up on urine, saliva, and hair tests.

Morphine takes much longer to work than heroin and remains in your system for a significantly longer period of time.

Codeine leaves the body even more quickly than heroin and actually stays in your system for the least amount of time out of all opioids.

As previously stated, prescription opioids like oxycodone, which is available in pill form under the brand name OxyContin, have to pass through the digestive system and have a much longer half-life since they take longer to work. Despite taking longer to take effect, they show up very quickly in an opioid drug test.

Hydrocodone is often combined with acetaminophen and sold under the brand name Vicodin. Hydrocodone stays in your system for longer and has a larger window for detection, but if someone does not wait long enough to conduct an opioid drug test, it will not show up.

The Best Way to Beat an Opioid Drug Test

The only way to guarantee that an opioid drug test will come back negative is by getting addiction treatment and getting clean. Medical detox will flush the opioids from your system, and an addiction recovery treatment program can ensure that you stay sober in the long term.