Opioids are prescription medications that bind to opioid receptors in the brain, which are responsible for sending messages of pain and reward throughout the body. Opioid medications are effective pain relievers because they interfere with pain messages that would be sent throughout the body and instead produce a calming or even euphoric effect.

All opioid medications are based on the chemical structure of morphine, which is the active ingredient from opium. Opiates are naturally derived from opium, while opioids are synthetic derivatives. When taken as directed by your doctor, opioid painkillers are considered safe. Use can quickly turn into dependence and addiction, however, if you are not careful.

Opioids are highly effective pain relievers as well as highly addictive. Any opioid use must be closely monitored, as misuse is common. Misuse happens when you take opioids in ways other than how they were prescribed to you, consume someone else’s prescription medication, or take opioids just to get high. Strictly following usage instructions from your doctor is the best way to minimize risks of misuse, though opioid use disorders still develop even under a doctor’s supervision.

Read on to learn about some of the strongest opioids available today.

Morphine, which is used as a general painkiller, was first discovered in the early 1800s. It has not lost any potency over the years, and it remains one of the most potent and most widely used painkillers in the world.

Morphine is prescribed to relieve moderate-to-severe pain in either immediate-release or extended-release versions. It is meant to be used only for short-term pain management as it is highly addictive.

The varying degrees of the potency of each of the above drugs do not make them more or less effective painkillers. In similar small doses, some opioids provide stronger pain relief than others, but their overall effectiveness depends on your treatment goals, desired dosage amounts, how long you may need to take pain medication, and the severity of your pain.

Sold frequently under the brand name OxyContin, oxycodone is also used to treat moderate-to-severe pain, but it may be safer for long-term use than morphine. As an opioid painkiller, it still runs the risk of misuse and addiction, however, so it must be taken with caution and exactly as your doctor prescribes.

Oxycodone works by decreasing pain messages being sent throughout your body and increasing sensations of feeling good, similar to what endorphins do. In general, it is risky to mix medications, but oxycodone can be used in combination with other drugs. You should never attempt to mix prescriptions on your own, however, as unexpected and adverse side effects can occur.

Methadone, a prescription opioid, is much stronger than morphine but not as strong as other opioids, such as heroin. It is commonly used in the treatment of addiction to opioids such as heroin, though it can also be misused. When taken properly, methadone is used as a replacement drug for people who have become addicted to opioids.

As a replacement drug, methadone helps to stabilize people who are going through the withdrawal process from opioids they have become addicted to. It provides the same physiological effects on the body as heroin, for example, without causing cravings and unpleasant withdrawal symptoms. If taken for long enough, dependence on methadone and subsequent withdrawal symptoms can occur, though they will be much less intense than heroin withdrawal.

Methadone can also be used to treat pain caused by a heart attack, surgery, or physical trauma.

This drug is one of the strongest opioids available. It is 50 times to 100 times more potent than morphine and about 80 times stronger than heroin. Legally, fentanyl is prescribed for the treatment of chronic pain. Illicitly, however, fentanyl is misused for the relaxed and euphoric high opioids can produce in high enough doses. 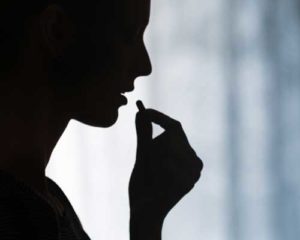 Fentanyl misuse is extremely dangerous since it comes in such high potencies. Experts explain that it is very difficult for people to know exactly how much fentanyl they are really consuming, especially when they inject it.

Many recreational street drugs are also laced with fentanyl, and people consume it or mix it with other substances without knowing it. As a dangerously strong respiratory depressant, fentanyl misuse is frequently associated with fatal overdoses.

The U.S. Food and Drug Administration approved Dsuvia, a relatively new prescription opioid, in November 2018. It comes in the form of a tablet that is placed under the tongue to dissolve. It provides a fast form of pain relief for people who have experienced extreme trauma, such as a gunshot wound or badly broken bone.

Dsuvia, which contains the synthetic opioid sufentanil, is five times to 10 times stronger than fentanyl, and 1,000 times more potent than morphine. Critics of the drug argue that an opioid of this strength is not necessary and will only fuel the opioid overdose epidemic in the U.S.

Supporters of Dsuvia, however, argue that it fills an important role for emergency and effective pain management, particularly for soldiers on active combat duty. When used as designed, Dsuvia can only be administered in pre-filled, single doses, so the risk of overdose is low. Time will tell if its use can be safely contained or if it becomes another widely abused prescription opioid.

Opioid painkillers fill an essential role in the treatment and management of severe pain. When used properly, they can provide relief that cannot be obtained through other medications or interventions. The use of prescription opioids, especially the highly potent ones, must be closely monitored to ensure safe use and to reduce the risk of adverse and life-threatening side effects.