How Long Will Methamphetamine Show Up on a Drug Test?

Methamphetamine (meth for short) is a potent stimulant that acts on the central nervous system. It is illegal to have meth without a prescription. The recreational version of the addictive drug, known by several slang names, including chalk, ice, glass, and crystal, can come in pill or powder form and is popular for its euphoric effects.

Users who take white, odorless crystalline powder substances experience an elevated mood and alertness and also have bursts of energy. “Meth at first causes a rush of good feelings, but then users feel edgy, overly excited, angry, or afraid,” writes MedLine Plus.

Meth users who are slated to be drug tested as part of their recovery program or a prospective or existing job may be concerned about how long the drug is detectable in their systems if they have used it recently. How long will methamphetamine show up on a drug test? The answer depends on a few factors, including what kind of drug test is being used.

First, It’s Important To Note That Meth Comes In More Than One Form. There Are Four Kinds:

The kind of meth used can affect the outcome of a drug test. Recreational users commonly abuse the d-methamphetamine kind. It has been reported to be two to 10 times as physiologically active as l-methamphetamine and raises one’s breathing, heart rate, blood pressure, body temperature.

“Each particular type of meth has a slightly different chemical makeup due to the way it was manufactured, which will also alter its potency, the method of use, duration of effects, and likely the frequency and quantity used,” writes HealthStreetwrites in its blog on the topic.

How Meth Drug Tests Detect Use

Drug tests can screen saliva, blood, urine, and hair follicle samples for meth use. The U.S. Food and Drug Administration (FDA) has approved all of these tests. People who must complete a drug test may want to find out which kind of drug test they are taking as detection windows vary according to the kind of drug test given. Below is a list of the kinds of drug tests given and their meth detection timelines. This is just a general guide.

A blood test can find evidence of meth use within one to two hours after use to one to three days after use.

Saliva can be swabbed from the mouth and tested for meth use. Meth use can be found 10 minutes after use and anywhere between one and four days after.

A urine drug screening is more commonly used than the blood or saliva test because the meth detectable window is longer. Depending on the kind of methamphetamine used, a urine drug test can find evidence of meth use two to five hours and three to five days after last use, according to HealthStreet.

This test has a wider detection window. Most hair follicle tests can pick up substance use that has occurred over the past 90 days. It can pick up evidence of cocaine use for 90 days or three months.

Popular ways to use meth include smoking it, injecting it, or snorting it. It also can be orally ingested. According to data cited by the National Institute on Drug Abuse, smoking the substance is the most common way to use it.

Users typically use a glass pipe to smoke the substance. Smoking or injecting meth ensures the drug gets into the bloodstream rather quickly so users can get a quick, pleasurable rush that lasts a few minutes. If ingested or snorted, the high can last longer for nearly half of a day. The effects of meth are said to last longer than those of cocaine. 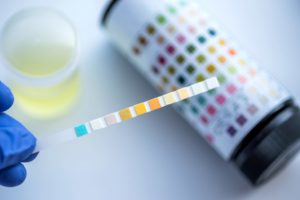 Users should be aware that how they take meth can affect the outcome of their drug test, including whether the drug was taken along with another substance. According to a study, the elimination half-life for meth, the time it takes for the drug to be reduced by half in the bloodstream, was similar regardless of how it was taken. Whether it was used intravenously, intranasally, or smoked, it can take between 10 and 12 hours to wear off, which means the substance stays in the body long after it was taken and the high has passed.

If meth is used with another substance, such as alcohol, that also can keep it in one’s system longer. Speaking of using alcohol with meth, this is a dangerous mix. When people use the drugs together, they risk drinking more than they wanted to or realize because meth often masks the signs of intoxication. This puts meth users at risk of alcohol poisoning and death.

How Long Methamphetamine Stays In A Person’s System Is Also Influenced By Other Individual Factors, Such As:

Chronic or heavy users who use meth for long periods can expect the drug to stay in their systems longer. Simply put, the more you use, the longer you extend the period to test positive for the drug.

Meth’s addictive nature makes it very easy for users to become physically and psychologically dependent on it. Chronic users often find themselves battling a meth addiction because of the drug’s potent effects. The longer meth is used, the more noticeable the symptoms and signs of addiction become. Positive meth drug test results could be an indicator that one has is inactive meth addiction.

Signs Of Meth Use Include:

The recreational version, which is illegal, is often made with the cold medicine ingredients ephedrine and pseudoephedrine, which also raises one’s blood pressure and heart rate and can cause hyperactivity. Chronic meth users experience anxiety and irritability. Other psychological side effects that accompany long-term use include anxiety, delusions, hallucinations, paranoia, and suicidal thoughts.

Another thing to know about meth is that users engage in a “binge and crash” pattern of use. This means they seek out more of the drug after its effects wear off but before the concentration of the substance falls significantly in the bloodstream. People who are at this level of meth addiction typically will go without food or sleep while binging on the drugs for days or several nights straight.

NIDA Lists Other Long-Term Effects Of Meth Use As:

Long-term meth users who want to end their dependence on the drug should avoid quitting abruptly. Going “cold turkey” is discouraged. Instead, seek help at a reputable, licensed drug treatment facility that offers medical professionals and addiction counselors who can put you or you’re loved on the path to sobriety. It often is difficult for meth users to withdraw on their own because the symptoms are so uncomfortable and can lead one to go back to using just to ease the discomfort.

Entering a medical detox program that is monitored around the clock by health professionals will help ensure that you or your loved one is kept safe as meth withdrawal runs its course. You can withdraw from the drug without risking relapse or deadly seizures. Medications may also be given to help ease nausea, chills, meth cravings, depression, and other symptoms.

After detox has been completed, recovering meth users will be advised to enter an accredited treatment facility that offers programs for meth addiction. Recovering crystal meth users have several options to choose from. Inpatient treatment, residential treatment, and outpatient treatment are popular options that help people get on track to sobriety. At least three months in a facility such as these are needed to give recovering the best possible chance to recover.

The meth drug test may be the beginning needed to end addiction. If you or someone you know is battling with a meth addiction or a dependence on other addictive substances, they must receive help now. They don’t have to try to manage addiction or withdrawal symptoms on their own. Call Delphi Behavioral Health Group today at 844-605-0706 to learn about the benefits of personalized treatment at one of our private facilities.

Treatment programs at Delphi Behavioral Health Group’s facilities provide unique therapy and counseling methods for certain addictions. They are designed to allow you to receive the daily support of the facility’s staff and your loved ones when you return home. Our treatment centers provide just what’s needed for community, counseling, and support throughout the day so clients can apply the lessons they learn to their lives everyday life. Give us a call to discuss your loved one’s options today.