The Behavioral Signs of Someone on Meth

Methamphetamine (N-methyl-1-phenyl propane-2-amine) is a central nervous system (CNS) stimulant that is available as a white powder or a pill. The methamphetamine sold on the street appears as fragments of glass or as shiny blue-white rocks.

Methamphetamine is used medicinally in the treatment of narcolepsy and attention deficit hyperactivity disorder. On the street, the drug goes by the names crystal meth, meth, crank, ice, chalk, crystal, and speed.

Because the drug does have some medical uses, it is classified as a Schedule II controlled substance by the United States Drug Enforcement Administration (DEA).

Abuse of the drug is primarily limited to privately manufactured crystal meth. For the most part, it does not involve pharmaceutical-grade methamphetamine that is used for medical purposes.


What Are Some Signs of Meth Use?

The overall general signs that someone is on a stimulant like meth include:

People may also be distracted easily and suspicious of others. Some individuals tend to isolate themselves and don’t wish to interact with others.

Chronic meth abusers typically will display characteristic signs that they are abusing the drug. These include:

Tweaking occurs at the end of a drug binge when meth users are not getting the euphoric effects they seek. They begin to become apathetic, depressed, and express cravings for the drug. They may also display psychosis that can include paranoid delusions, meth bugs (the sensation that bugs are crawling all over the skin), other hallucinations, and extreme difficulty sleeping.

The crash phase occurs when the effects of the drugs have worn off, and the person suffers a significant depletion of neurotransmitters. During the crash period, the person will often become lethargic, may sleep for several days or longer, and be very irritable and depressed.

Many individuals will be motivated to seek out more meth during the crash period. They may express significant cravings for the drug.

According to the National Institute on Drug Abuse, (NIDA), a sign that a person is chronically using any drug is the development of tolerance. Tolerance for the effects of meth occurs very rapidly. Regular users find they need increasing amounts of the drug to get the types of effects they seek.

Very often, tolerance to meth leads to a decrease in overall feelings of euphoria, well-being, invulnerability, and other effects of the drug. Typically, users become more psychotic, irrational, and impulsive when they use.

Over time, changes in the central nervous system due to chronic abuse result in difficulty experiencing satisfaction and pleasure from events other than drug use. When significant tolerance to meth has developed, many individuals continue to use the drug to avoid the apathy, lack of motivation, and staleness they feel when they are not using it.

Chronic abusers of meth begin to demonstrate problems controlling their use of the drug very early in their cycle of addiction. These individuals begin to spend more time trying to get meth, using meth, and recovering from the effects of use. 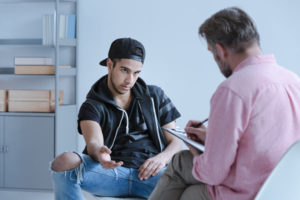 They begin to sacrifice activities that were once important to them to continue to use meth and even begin to ignore important personal obligations to engage in drug abuse. Very often, these individuals will begin to use the drug in situations where it is dangerous to do so, such as before driving a car or while caring for children. They may realize they are jeopardizing their health due to their drug use, but they continue to use the drug despite this.

In some individuals, this loss of control may be represented by selling items to buy drugs, engaging in criminal activities, or participating in other types of risky behaviors to get meth.

Chronic abusers of meth will develop some level of physical or psychological dependence on the drug. Depending on how long they have been using the drug and the amount of drug they typically use, these symptoms can be severe.

According to the APA, the symptoms of meth withdrawal typically include:

Usually, withdrawal symptoms from meth are not considered dangerous. However, individuals may become emotionally distraught, irrational, and even aggressive. This can lead to them harming themselves or others.

Avoiding The Negative Symptoms Of Meth Use

The adverse symptoms of meth abuse are best avoided by not using the drug at all. Individuals who regularly use meth will experience some level of bingeing and crashing, and they will experience unpleasant effects.

Meth is a very potent stimulant, but the euphoric effects are very short-lived. People who abuse the drug often take it in the bingeing fashion (often referred to as a “bump” or a “run”). When they don’t have any more of the drug, they go through a physical and emotional comedown, or crash, associated with the drug being metabolized and leaving their system. This cycle is often referred to as a binge-and-crash pattern.

Meth is processed more slowly than many other amphetamines and stimulants like cocaine. The crash can be lengthy for chronic abusers, and bingeing episodes can last for several days or longer.


How Does Meth Work?

Methamphetamine use results in the release of several different neurotransmitters, including dopamine, norepinephrine, and serotonin. Their release leads to significant euphoria, the rush of energy, feelings of invulnerability, decreased appetite, and the reduced need for sleep that the drug produces.

In medicinal doses, the drug can increase attention, reduce activity, and promote wakefulness. When abused in larger amounts, individuals are more likely to have feelings of euphoria, problems with judgment, issues with attention, and other significant problems, including potential psychosis.