What Is Meth Most Often Cut With (Can You Recognize It)?

Meth is not cut with other substances as commonly as other drugs are. There are aspects of the manufacturing process, however, that can result in the presence of dangerous substances in crystal meth.

Crystal meth sold on the street is most likely not cut in the same way that cocaine and heroin are cut by manufacturers. According to numerous reports, some of the seized samples of the drug include adulterants that generally have no effect, such as sugars, milk powder, and other fillers.

The chemical methylsulfonylmethane (MSM) is the most common cutting substance found in seized samples of crystal meth. This is a medication that is used for strengthening cartilage. It has a similar appearance to meth when put through the manufacturing process. It does not have any serious side effects associated with its use.

Other potential cutting agents include amphetamines or other stimulants and caffeine. There is at least one report of the dissociative hallucinogenic drug ketamine being present in samples of crystal meth.

There have been several reports of meth being laced with the potent opiate drug fentanyl.

Fentanyl is a dangerous drug of abuse due to its very high potential for overdose because of its high potency. Lacing drugs like cocaine and heroin with fentanyl is believed to account for a significant proportion of the increase in fatal overdoses associated with these drugs.

There is no way to visually inspect a substance to tell if fentanyl is in it, but you can use a lab test to determine if a drug is laced with fentanyl.

The Color of Meth May Reveal Something

Aside from meth laced with fentanyl, the biggest danger from adulterants in meth is from the products used in the manufacturing of the drug. Some sites offer lab tests for methamphetamine; however, the reliability and validity of these tests are not well documented.

According to the DEA, there might be color clues regarding the types of residue in the product.

Color of Meth and What It Means

Some of these products, like phosphorus, can be extremely toxic.

Because there are different manufacturing methods to produce crystal meth, and many of these methods use toxic substances that are not eliminated when the meth is extracted, individuals who use crystal meth are subject to numerous potential health issues.

“These include significant changes to the pathways in the brain associated with chronic and repeated use, damage to other organ systems, the characteristic problems with skin sores that many chronic meth abusers display, and oral hygiene issues, such as rotting teeth (meth mouth).”

Many of the adulterants listed above have far fewer negative effects on health than the products used in the manufacture and extraction of meth from over-the-counter medications and other sources, such as energy drinks.

Methamphetamine (N-methyl-1-phenyl propane-2-amine) is a stimulant medication that was developed in Japan as a potent alternative to amphetamines. The drug was popularly used during World War II to keep troops awake.

In the 1950s, the drug gained a reputation as a treatment for depression or a method to maintain wakefulness. Due to significant abuse of the drug, it became a controlled substance in the 1970s.

Its medicinal use is now limited to a potential treatment for ADHD and narcolepsy; however, other drugs are more often prescribed for these disorders. Nonetheless, the Drug Enforcement Administration classifies it in the Schedule II category, meaning that it does have some recognized medical uses, but it also has a serious potential for abuse.

The meth that is abused on the street often contains other substances due to the manufacturing process.

Because the majority of the meth sold on the street is manufactured in private laboratories, impurities are commonly present because the manufacturing process is not standardized. These are not frequently due to the drug being cut with other substances; rather, they are related to issues with the production process. There are no formal protocols for the manufacture, handling, and packaging of the drug.

The quality of meth that is sold on the street, due to the vastly different manufacturers and methods, can be quite variable from source to source.

Almost all crystal meth on the street has some level of impurity, even if it is not cut with other substances.

The Manufacturing Process of Crystal Meth

According to the DEA, there are many recipes to produce crystal meth. Many of these require the use of products that can be bought over the counter. These include weight loss products or cold medications that contain the drugs pseudoephedrine or ephedrine, from which meth is extracted.

The extraction and manufacturing process can include other ingredients that can be part of the final product once it is produced. These can include the following:

Again, there are numerous recipes for making meth. For instance, pseudoephedrine is mixed with a combination of phosphorus and iodine, or ammonia with some other substance, and a solvent like gasoline is added to extract the methamphetamine. The concoction is heated with acid or by some other process, and the meth is crystallized.

The heating process produces numerous waste products that need to be separated from the crystal meth. One example is phosphorus, which can be quite toxic. 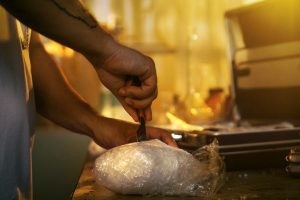 The waste products are never fully removed, however. Many potentially dangerous corrosive substances may remain in the product. These substances are responsible for much of the physical and mental damage that occurs with crystal meth use.

A quicker form of making meth (the “shake and bake” method) combines the ingredients in a container.

They are then shaken and heated, and the meth is extracted. While more convenient, this method may leave even more of the corrosive substances in the drug that is sold on the street.

The best way to avoid ingesting the toxic substances found in crystal meth is to not use the drug at all. Anyone who is regularly using meth should consider the potential risks, and contact a mental health care provider about getting involved in a substance use disorder treatment program.