What Is Cocaine Most Commonly Cut With?

Anyone who uses cocaine for recreational purposes most likely understands that the substance sold by street drug dealers is not pure. Dealers cut or dilute the drug to increase their profits.

Often, when users buy cocaine, the drug has been through several different illicit dealers, with each one diluting it further.

Various estimates regarding the purity of cocaine sold on the street suggest that 80 percent or more of the product is not pure cocaine.

What Type of Substances Are Typically Use To Cut Cocaine?

The number of potential fillers used to cut cocaine can be quite extensive. It often varies depending on the availability of cutting agents to the particular street dealer.

A general list of the categories of substances that are used to cut cocaine includes:

Ingredients that may mimic the appearance of cocaine but have few, if any, psychoactive effects are often used to cut the drug on the street. This allows for a cheap way to increase profits.

Numerous white powders and other fillers can be used. The following substances are commonly found in samples of cocaine that is seized in drug raids:

It is relatively rare for toxic substances without psychoactive effects to be mixed into cocaine, but it does happen.

For instance, a study of cocaine samples that were purchased through illicit sources online indicated that nearly 40 percent of the cocaine contained a medication called levamisole, a drug used to kill and expel parasitic worms in animals. The drug is not designed to be used by humans, and it is not available in the United States.

There are reports that the toxin strychnine is sometimes used in cocaine as filler, but these reports appear to be extremely rare if they are legitimate at all.

Arsenic, an extremely dangerous toxic substance, has been found in some samples of cocaine.

Acetone is a volatile substance that’s used in several common products, including house paint. It’s certainly not something you would want to consume, though acetone poisoning is rare. If cocaine is contaminated with excessive acetone, 40 grams of it in your system can be toxic. But acetone isn’t relevant to cutting cocaine as a harmful contaminant, but it may be dangerous for other reasons. Acetone is used in producing crystal and powder cocaine from the coca plant. It may also be used in converting powder cocaine back into rock cocaine, which is called re-rocking. This allows dealers to mix other substances into cocaine and then convert it back into rock form. Rock cocaine may sell at a higher price, because the average person may not realize it could have been adulterated.

One of the most dangerous substances that are known to be mixed with cocaine is the synthetic opiate drug fentanyl.

Fentanyl is far more potent than morphine or heroin. It is responsible for numerous overdose deaths because it is used to enhance the effects of heroin.

Fentanyl is an extremely dangerous drug that is between 50 to 100 times more potent than heroin. Individuals have been known to experience overdose effects by simply touching fentanyl.

The U.S. Drug Enforcement Administration (DEA) recently released a series of warnings about the potential dangers of cocaine laced with fentanyl. There have been numerous overdose deaths associated with cocaine, and an alarming proportion of these deaths is believed to be due to the mixture of cocaine and fentanyl.

The warnings also report that there is a dangerous trend for drug dealers to cut other drugs of abuse with fentanyl.

Why Cut Cocaine With Fentanyl?

As a powerful opioid, fentanyl has some of the opposite effects to cocaine. Opioids can cause some sedating effects on your nervous system, while cocaine causes stimulating effects. It makes sense why fentanyl would be mixed into other opioids like heroin. Fentanyl may increase the potency and perceived quality of the heroin. If heroin supplies are cut with inert substances to increase profits, cheaper fentanyl can increase the potency of weakened heroin.

But why would you cut cocaine with fentanyl?

Some dealers may be mixing in fentanyl unknowingly. Fentanyl is increasing in availability in the United States. To most people, powered forms of different drugs are identical. Fentanyl can make its way into cocaine supplies accidentally. However, mixing opioids and stimulants has been a popular practice for decades. It’s called speedballing, and it’s a dangerous form of recreational drug use that has contributed to many deaths, including some high-profile deaths like John Belushi, Phillip Seymour Hoffman, and River Phoenix.

Combining cocaine and opioids is thought to counteract some of the uncomfortable side effects of both drugs. Cocaine may stop you from feeling sedated and sleepy on an opioid. Opioids may stop you from feeling anxious and restless on cocaine. Fentanyl may be used to facilitate a more intense opioid euphoria, despite the counteractive effects of cocaine. However, mixing stimulants with opioids may make you feel like you can handle more, leading to an overdose.

The DEA and some news outlets have suggested that the rising number of cocaine overdose deaths observed in the past several years may be related to people being unaware that their cocaine is cut with fentanyl. All sources agree that more data is needed to understand the problem.

How Can You Tell What Else Is in Cocaine?

According to the DEA and most other sources, outside of laboratory tests, there is no sure way to tell what cocaine is laced with. 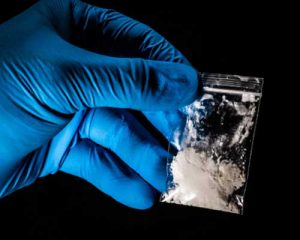 According to Scientific American, there is a relatively inexpensive laboratory test to determine the presence of fentanyl in any substance, including cocaine.

However, for most of the substances that it has been found in, formal laboratory tests are necessary to determine their presence.

Anyone cocaine user who begins to experience extreme nausea, muscle stiffness, confusion, or other effects that would not be expected from using the drug should immediately call 911.

Cutting cocaine is inherently dangerous for several reasons. But the main, overall reason is that it makes the drug unpredictable. When you buy cocaine on the street, you don’t know if you’re buying pure cocaine, diluted cocaine, or cocaine mixed with other active substances. Even cocaine that’s mixed with totally harmless substances can be dangerous. If a population gets used to dilute cocaine and adapts their doses to achieve an effective high, they may overdose when pure cocaine is introduced to the area.

How To Ensure Safety

The only way to truly ensure safety is not to use cocaine at all.

“Cocaine is an extremely potent stimulant drug that by itself has numerous potential negative effects, including the development of a substance use disorder. Cocaine laced with other substances can produce unpredictable effects, many of which can be potentially dangerous and even fatal.”

Individuals who can’t seem to stop their cocaine use should get treatment for a substance use disorder from a licensed mental health professional who specializes in treating addictive behaviors.