Can You Safely Use Benzodiazepines During Pregnancy?

If you’re dealing with a chronic issue like an anxiety disorder or epilepsy, pregnancy can be particularly challenging. Still, many people who live with these issues want to and are capable of starting families and having children. But when you speak to your doctor about your next nine months, you may find out that some of your prescriptions aren’t always safe for your baby.

Benzodiazepines are a class of drugs prescribed to treat general anxiety, anxiety associated with depression, insomnia, and, in rare cases, seizure disorders like epilepsy. The most famous benzodiazepine drugs include Valium, Xanax, Klonopin, Librium, and Ativan. Rohypnol is also an infamous, very potent benzodiazepine drug that is only prescribed to manage symptoms of certain sleep disorders in the United States, like narcolepsy.

This group of drugs collectively are known as central nervous system (CNS) depressants or sedatives. They bind to receptors in the brain that use a neurotransmitter called gamma-Aminobutyric acid (GABA), which is involved in slowing down communication between neurons. If your brain does not produce enough GABA on its own, you may have panic attacks, chronic anxiety, or, at worst, electrical surges leading to seizures. When benzodiazepines bind to these receptors, there is more of the GABA neurotransmitter available to manage these signals, which can lead to a sense of calm and relaxation.

It is rare for benzodiazepine drugs to be prescribed for consistent use. Most, like short-acting Xanax and Klonopin, are prescribed for as-needed use, in moments of panic before or during a stressful situation. When benzodiazepines are prescribed for insomnia or a longer-lasting issue, they are not prescribed for more than two weeks because the body quickly becomes dependent on them and also tolerant of them. As a result, it becomes easy to develop compulsive behaviors to fill cravings or manage rebound anxiety.

Many people struggle with benzodiazepine abuse, but even when the medication is taken as directed, there are some situations in which it is not safe. For example, it is important to avoid alcohol while you take this medication because alcohol also acts on the GABA receptors, and this can lead to poisoning and hospitalization.

Are Benzodiazepines Safe To Take as Prescribed During Pregnancy?

The average risk of birth defects during pregnancy in women who avoid harmful substances and other risk factors is 3 percent to 5 percent. This is called the background risk. A few early medical studies reported that there was a potential link between birth defects like a cleft palate when the mother took benzodiazepines, but follow-up studies have not corroborated this risk. Other studies had suggested an association between low birth rate or preterm deliveries when benzodiazepines were taken, but these have also not been verified by follow-ups.

A study spanning 1990 to 2010 in the United Kingdom followed women who took benzodiazepines in their first trimester and calculated the risks of birth defects called major malformations.

The average rate of major malformations in the control group was 2.7 percent, so there was no significant difference between first-trimester exposure to benzodiazepines and no exposure. For women who need help managing panic attacks or insomnia, this means their doctors can safely prescribe these medicines when needed.

In infants, they may include the following symptoms:

It is important to tell your pediatrician if you have taken benzodiazepines close to delivery, either as prescribed or for nonmedical reasons. The pediatrician can then watch for signs of withdrawal in your child so that the riskier symptoms can be treated. It will take up to two weeks to clear your child’s body, but benzodiazepines have not been associated with any long-term developmental difficulties.

A 2017 study found that there are a few increased risks from taking benzodiazepines or antidepressants during pregnancy. There was an increase in C-section births, and the babies more often needed oxygen support or other respiratory support after birth. Duration of the pregnancy was shortened by an average of 3.6 days.

If you have an anxiety disorder or develop anxiety during pregnancy, ask your doctor about the risks if you receive a prescription for benzodiazepines. The benefits of taking these medications as directed while pregnant can outweigh the risks. Suffering from frequent panic attacks or chronic anxiety increases the risk of miscarriage, preterm delivery, and delivery complications. However, these risks are also very low, so the choice of benzodiazepine treatment during pregnancy is very individual.

You may hear from friends and family or read online that some women say, “I took benzodiazepines while pregnant and had a healthy child.” They may be correct. Taking benzodiazepines may increase your risks during pregnancy, but that doesn’t mean they will cause serious issues 100% of the time. However, there have been women who smoked cigarettes and drank alcohol while pregnant without seeing obvious health problems in their children.

Still, that doesn’t mean it’s safe to take a benzodiazepine like Xanax or Klonopin during pregnancy. Even occasional Klonopin use during pregnancy may increase your risks. Plus, some issues may not be apparent until later. For instance, research has found that smoking while pregnant can lead to issues in children that occur later in life, like obesity, heart problems, and respiratory issues. The long-term effects on a baby born after taking benzodiazepines during pregnancy may still be unknown.

Seizures Can be Harmful

This is a significant concern for pregnant women with epilepsy. Seizures can slow down your heart rate and subsequently slow down the fetal heart rate. They can also decrease oxygen and blood flow to your baby. Just as seizures can cause injuries in an adult who experiences them, they may also injure a fetus as you pass out, fall, and experience convulsions. In some cases, the benefit of taking prescription medications may outweigh the risk of a severe seizure while pregnant, especially if safer treatment options don’t work. For that reason, it’s important to work closely with your doctor to weigh the pros and cons.

It’s true that excessive stress may be potentially dangerous to mothers and unborn babies. Stress and anxiety aren’t just psychological; they can also cause physiological consequences. Pregnant mothers often experience increased blood pressure as their body adjusts to provide for a growing child. Stress can also increase your blood pressure, causing a serious issue called pre-eclampsia. Stress, anxiety, or panic attacks may also contribute to premature birth and low birth weight. Again, these risks highlight the importance of weighing the risks of a benzodiazepine with your doctor and making a plan for your pregnancy.

Benzodiazepines can cause chemical dependency, especially after consistent long-term use. Doctors who prescribe benzodiazepines often try to avoid this by prescribing them for short periods or by prescribing them to only be used as needed. However, some people do become dependent on benzos. Quitting after becoming dependent can cause you to experience uncomfortable and even dangerous withdrawal symptoms. If you become pregnant while you’re dependent on a benzo, quitting abruptly could be dangerous for you or your baby. Your doctor may be able to help you taper off the drug within a few weeks, but that will mean continuing to take it for a little while.

Benzodiazepine Abuse Poses a Risk To Mother and Child

Abusing any drug is risky, whether you are pregnant or not. Substance abuse during pregnancy increases risks to the developing fetus. Although benzodiazepines are associated with fewer negative outcomes, they may still cause harm if a large amount of the substance is in the body and passes through the placenta. The child is more likely to experience withdrawal symptoms when they are born, which increases the risk of serious health outcomes from breathing problems and seizures.

While most people who struggle with abuse or addiction to benzodiazepines take these drugs in conjunction with other substances — most often opioids, alcohol, or cocaine — they can also be abused alone. 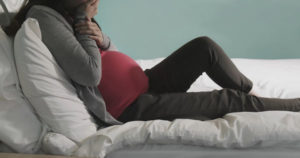 Trying to quit without help, or going cold turkey, is dangerous with benzodiazepines. Many withdrawal symptoms are like the conditions that benzodiazepines were designed to treat, including panic attacks, insomnia, and seizures.

Withdrawal management in a medically supervised detox program may involve replacing the benzodiazepine of abuse with diazepam (Valium) because it is longer-lasting so that it can be used for tapering.

However, this may not be appropriate, and a detox physician may choose to treat each symptom with other medications, like over-the-counter painkillers, as needed.

Working with an evidence-based detox and rehabilitation program is crucial since some withdrawal symptoms can be deadly.

This is even more important if you are pregnant. A doctor can then monitor your health, along with the health of your child.