Can Benzos Help with Opiate Withdrawal? How?

The American Society of Addiction Medicine (ASAM) publishes that in 2015, around 2.5 million people in the United States struggled with opioid addiction. Opioid drugs include both powerful narcotic pain relievers like OxyContin (oxycodone) and Vicodin (hydrocodone/acetaminophen) as well as illicit fentanyl and the illegal opiate heroin.

How Benzos Can Be Used To Help

When a drug such as an opiate regularly interacts with brain chemistry, the chemical makeup of the brain is changed, and the brain can no longer keep its chemical balance stabilized without help from the drug. When the opioid drug wears off, the brain struggles to regulate itself, often by sending the central nervous system into overdrive. Things like blood pressure, heart rate, respiration, and body temperature can spike, causing agitation, tremors, breathing problems, hypertension, sweating, arrhythmia, anxiety, and insomnia.

Benzodiazepines are sedative-hypnotic medications that are prescribed to treat insomnia, seizure disorders, and anxiety. They can thus aid in quelling some of these heightened functions of the central nervous system.

It is important to note that because of their similarity of action, the combination of opioids and benzodiazepines can actually be dangerous and lead to potentially life-threatening respiratory distress and overdose, the U.S. Food and Drug Administration (FDA) warns. Benzodiazepines can be used safely during opioid withdrawal if the person uses it under the direction of a trained medical professional, the FDA further explains.

Some of the top benzodiazepines prescribed and their uses are explained below:

Benzodiazepines can be helpful during opiate withdrawal, but they are not generally considered to be the primary tool to manage side effects. Benzos are considered an adjunct treatment medication, as the British Journal of Clinical Pharmacology explains. 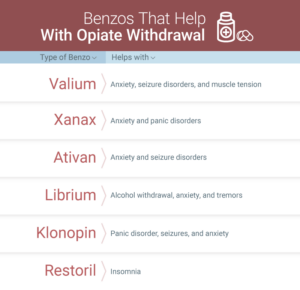 For instance, diazepam can help to relieve muscle aches and anxiety associated with opiate withdrawal. The World Health Organization (WHO) reports that temazepam can be help manage insomnia during opioid withdrawal, while diazepam can aid in managing agitation, anxiety, and restlessness.

Benzodiazepines can help with opiate withdrawal, but other therapeutic, supportive, and pharmacological methods are necessary as well.

One of the difficulties of opioid addiction is the heightened level of physical dependence that occurs with regular and repeated use of an opiate. Opioid drugs interfere with the normal transmission, absorption, and production of some of the brain’s neurotransmitters, like the one responsible for regulating sleep functions, movement abilities, and controlling moods.

Opioids can become habit-forming in very few uses, as information for the prescription painkiller OxyContin from the U.S. Department of Justice reports. Physical dependence can form in just a few days to weeks of regular use. When an opiate processes out of the body, withdrawal symptoms can be uncomfortable and significant, both physically and emotionally.

Medications are often useful to help manage opiate withdrawal. Opioids are central nervous system depressants that slow down some of the autonomic functions of the brain and body. They depress heart rate, body temperature, and blood pressure, and slow respiration rates. During withdrawal, some of these functions that have been suppressed by opiates will spike and become hyperactive.

Benzodiazepines are a class of prescription medications that also act as central nervous system depressants. They can, therefore, be helpful with minimizing some of the overactive nerve firings that can occur during opiate withdrawal.

Benzodiazepines are extremely addictive, and they can also lead to physical dependence with their own set of withdrawal symptoms. They should only be administered under the direct guidance of a trained medical professional.

To better understand how benzodiazepine medications can be useful during opiate withdrawal, it is helpful to understand the particulars of opioid withdrawal. Withdrawal symptoms can range from mild to severe concerning how long, how often, and how these drugs were taken.

For instance, if opioid drugs were misused and taken other than for medicinal purposes, the level of drug dependence is likely to be higher, and withdrawal will, therefore, be more intense. Regular and repeated use of opiates in high doses for a long time can make withdrawal more significant, and the duration longer as well since it can then take longer for the drugs to process all the way out of the body. The use of other drugs in conjunction with opiates, or the presence of other medical or mental health conditions, has the potential to complicate and exacerbate opiate withdrawal.

The U.S. National Library of Medicine (NLM) reports that opioid withdrawal typically starts within 12 hours or so of the last dose of an opiate drug. It can include the following side effects:

These side effects generally build up in the first few days and peak around day two or three persisting for about a week to 10 days on average. Sleep disturbances, mood swings and a low emotional state, difficulties feeling pleasure, cravings, and concentration issues can continue for a few weeks or months during protracted withdrawal.

Other Methods for Managing Opioid Withdrawal

Benzodiazepines are another class of tightly controlled prescription medications that can also be habit-forming and have difficult withdrawal symptoms when they are stopped suddenly after physical dependence has formed through regular use. They can be helpful during opiate withdrawal for short-term symptom management, but they must also be closely monitored and controlled.

The FDA publishes that there are three approved medications for the treatment of opioid dependence: buprenorphine, methadone, and naltrexone. Buprenorphine and methadone are both opioid drugs. They interact with the same opioid receptors in the brain to minimize withdrawal symptoms as the receptors stay activated. The difference between these opioids and other more common opiates of abuse (such as heroin, oxycodone, or fentanyl) is that they have a longer duration of action, which means they can be taken in lower and less frequent doses to keep withdrawal symptoms to a minimum.

Opioid drugs generally are tapered off slowly, and a substitution opioid such as buprenorphine or methadone is often used. This allows the brain and body to restore its chemical balance in a controlled manner and thus keeps withdrawal from being as shocking and intense. Through a controlled taper, the opiate can then be slowly weaned from the body.

Medical detox involves the use of medications during opiate withdrawal to manage the side effects. Besides opioid substitution medications, other medications and pharmacological methods can be useful during detox as well. In addition to benzodiazepines to aid in managing anxiety, insomnia, agitation, muscle tension, and restlessness, nonsteroidal pain medications may aid in treating physical discomfort, while gastrointestinal medications can help with the stomach upset.

Mood-stabilizing medications can also be beneficial during opioid withdrawal as can the blood-pressure medication clonidine, the journal Practical Pain Management reports. Clonidine is increasingly being used off-label to treat opioid withdrawal symptoms, as it can help to mitigate some hyperactivity in the central nervous system.

Careful medication management through a medical detox program, where vital signs can be closely monitored, and dosages can be adjusted as needed by highly trained medical professionals, is vital during opiate detox and withdrawal. A medical detox program can provide the highest level and standard of care to ensure safety during opiate withdrawal. These programs can also help to smooth out withdrawal symptoms and manage cravings, thereby helping to reduce the likelihood of relapse during detox.

In addition to pharmacological methods during opioid withdrawal, therapeutic and supportive measures are important, too. Detox is the initial stage where opiates process out of the body. Once physical stabilization is reached, the person should move into a comprehensive addiction treatment program that can address all components of opioid addiction.