The United States might be land of the free and home to over 328 million people, but when looking at its prisons, America incarcerates more of its citizens than any other country in the world. The War on Drugs has strongly contributed to the U.S. accounting for 25% of the entire world’s prisoners, despite the fact that the United States population for only about 5% of the people on this planet.

So how has the number of drug offenses changed over time? Which drugs are the biggest problems by state? We analyzed the United States Sentencing Commission’s data on 2017 drug-related federal offenders as well as years of data going back to 2010 for comparative purposes. We scraped state reports to gain a better understanding of what’s going on behind these numbers. Keep reading to see what we found. 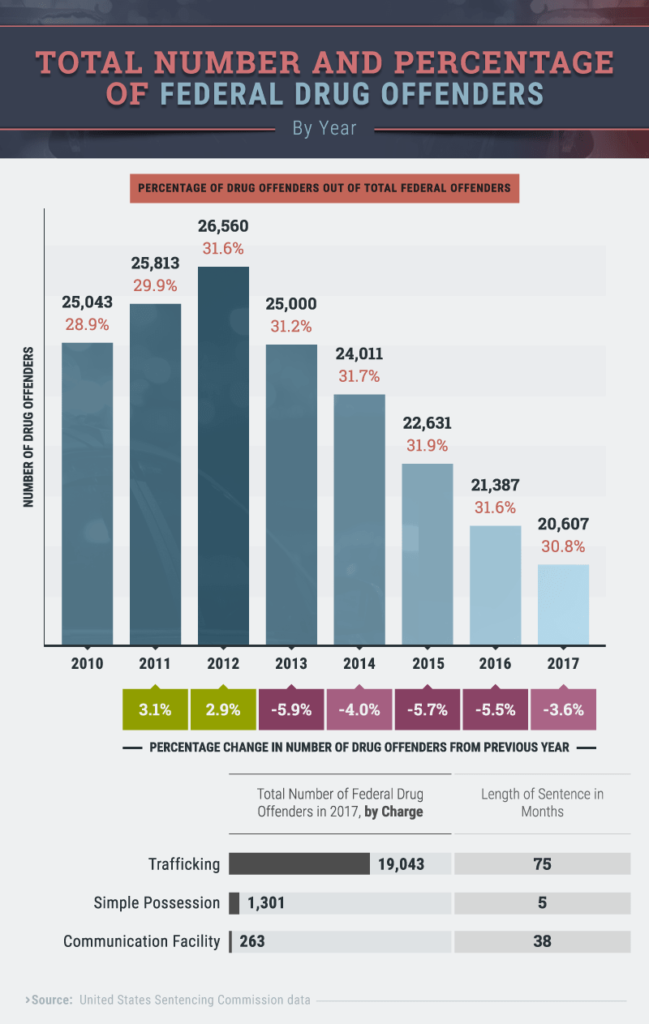 There is a big difference in being charged for drug trafficking and drug possession, though, both in the number of drugs found and years spent behind bars. Compared to the 19,043 drug trafficking offenders in 2017, there were just 1,301 offenders charged with simple possession and even fewer for those involved in communication facilities. 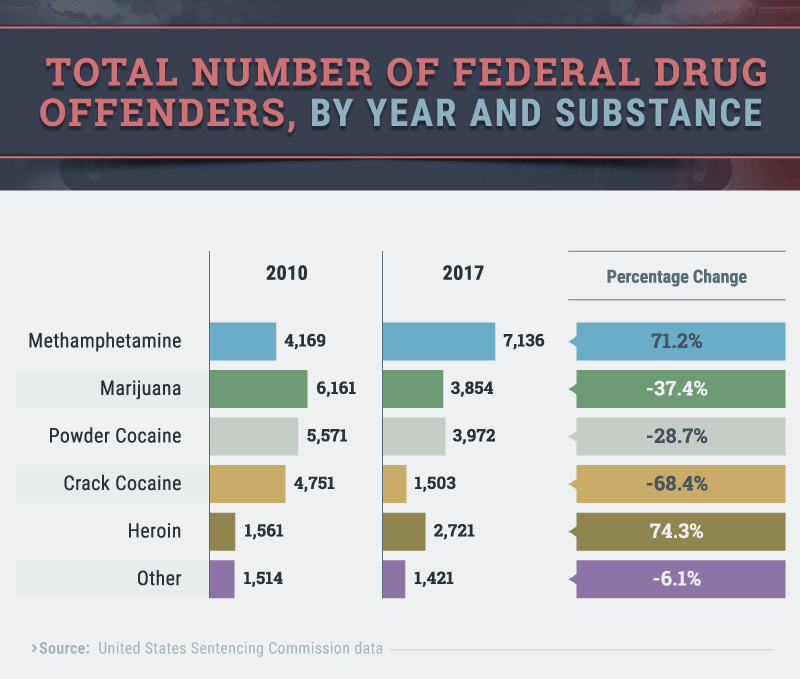 Despite overall drug convictions reaching the lowest point in over two decades, federal offenders possessing or trafficking methamphetamine and heroin increased from 2010 to 2017. In a span of 7 years, methamphetamine offenders increased by 71.2 percent, while heroin offenders increased by 74.3 percent. On the other hand, offenders associated with crack cocaine, marijuana, and powder cocaine had substantial decreases since 7 years ago. Marijuana’s 37 percent decrease is likely due to the increasing legalization of marijuana across the U.S., for both recreational and medical use. 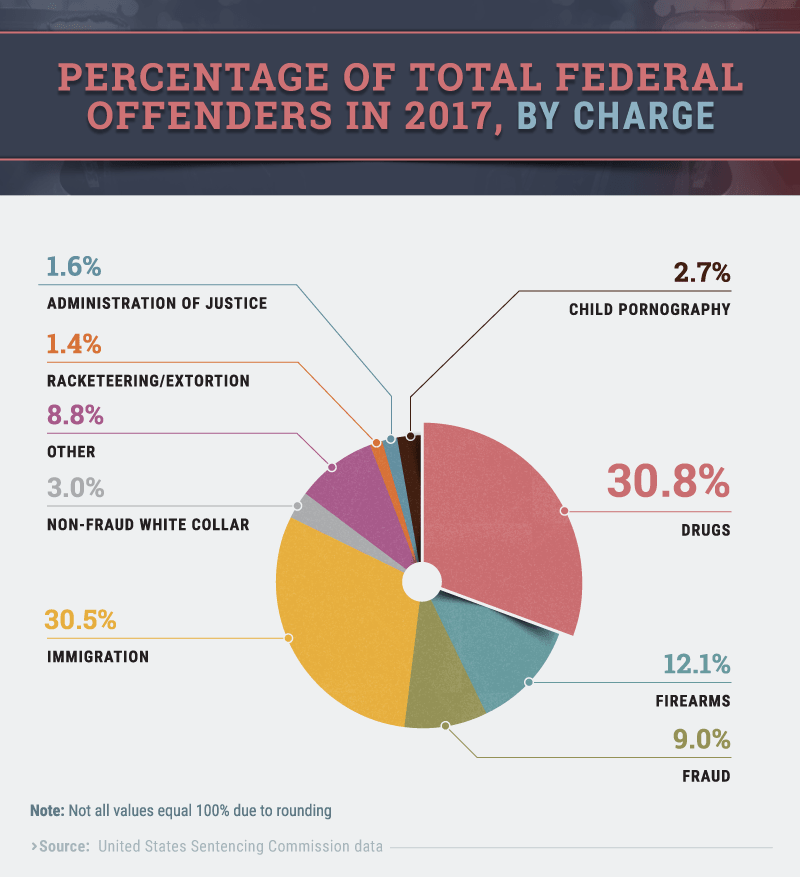 There has been a lot of talk about the number of drug-related arrests compared to arrests for violent crimes, and looking at the distribution of federal offenses, it’s clear why. Drug offenses made up almost 31 percent of total federal offenders in 2017, followed by immigration with over 30 percent.

Offenses associated with firearms were drastically less common, making up only 12.1 percent of all federal offenses.

That’s not to say drugs aren’t also one of the top killers in America, though. The opioid epidemic has become so dangerous that it is causing about the same number of deaths as firearms. However, if the mortality rates are pretty much equal, why is there such a discrepancy in federal offenders? Looking at the percentage of federal drug cases by state may give us a clue.

Sixty-one percent of offenders in Vermont had drug-related offenses, making it both the state with the highest percentage of federal drug cases and the state with double the national average.

The underlying issue may not be that Vermont residents use an abnormally high number of drugs, though. Instead, the underlying issue may be racially charged. With a population made up of 95.2 percent of Caucasians and just 1.2 percent of African Americans, there are nearly 10 times more African Americans people behind bars in Vermont than there are walking free. Unfortunately, this isn’t just occurring in Vermont or other states with high percentages of drug offenders. All over the country, there is a clear racial bias still present in the criminal justice system, especially when it comes to drug-related crimes. 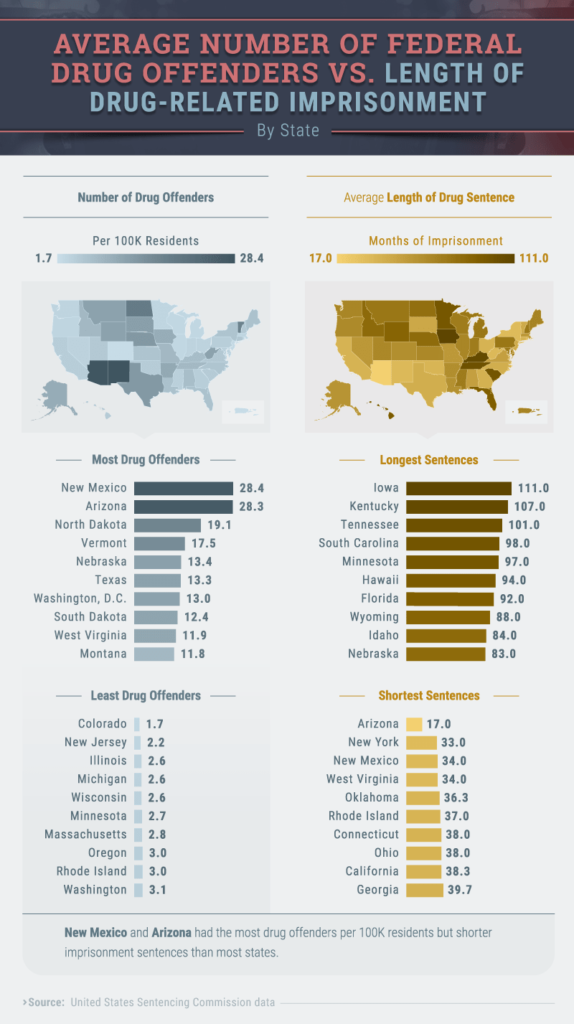 With so much focus on the opioid epidemic, methamphetamine was able to make an unannounced comeback. From 2012 to 2018, there was a 376.2 percent increase in methamphetamine seizures according to data from U.S. Customs and Border Protection. Separately for 2017, it was the most common drug offense in the majority of states. North Dakota had the most cases, with 14.8 methamphetamine-related drug offenses per 100,000 residents in 2017. Drug enforcement has begun to take notice of North Dakota’s increasing problem as well, after the seizure of nearly 62 pounds of methamphetamine in 2018. Nebraska followed with 12 offenses per 100,000 residents.

Opioids and marijuana didn’t disappear with meth’s return, though. Heroin was also a top drug offense in 2017, largely in the Northeast and Alaska, and saw a 27.3 percent increase in drug seizures from 2012 to 2018. Marijuana, on the other hand, was the top drug offense in just two states (New Mexico and Arizona), but seizures of the drug decreased by almost 46 percent between 2012 and 2018. 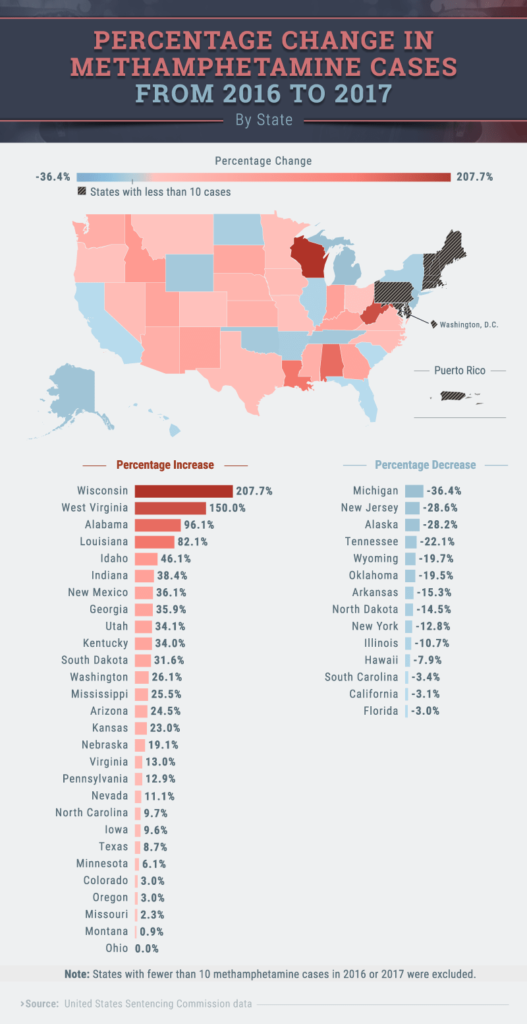 The popularity of specific drugs ebbs and flows, going through cycles over the years for various reasons. Methamphetamine popularity has skyrocketed in recent years, so which states have seen the greatest increase?

Wisconsin topped the chart with a 207.7 percent increase in meth cases from 2016 to 2017, loosely followed by West Virginia with a 150 percent increase. While most states have seen at least somewhat of an increase, Michigan saw a decrease of over 36 percent. Save for the few states with decreases in meth cases, the drug’s return is thought to be rooted in its strength and price. Methamphetamine has re-emerged stronger and cheaper than it used to be, pushing its use to an all-time high.

At the end of the day, the real catalyst for meth’s take over is addiction. Meth, opioids, and other illicit drugs are highly addictive, deadly, and negatively impact lives more than just time behind bars. Drug offenders and convictions may have hit the lowest point in over two decades, but overdoses are not slowing down.

Getting help and stopping addiction in its tracks is the only way to decrease the death rate, and at Delphi Behavioral Health Group, we’re here to help. With a growing network of drug and alcohol addiction treatment facilities, our addiction specialists can help match you with the facility and treatment plan best fit for your recovery. To learn more about addiction and treatment or set up a call with a care expert, visit us online today.

We analyzed the United States Sentencing Commission’s data on 2016 and 2017 federal sentences for drug-related offenses by state. We also scraped individual state reports to obtain the number of drug offenders by drug type to understand which drugs are most federally sentenced by state, as well as the length of imprisonment. In certain cases, such as for methamphetamine drug offender cases, we excluded states in our percentage change analysis that had fewer than 10 cases in either 2016 or 2017. Even though the most commonly sentenced cases were drug trafficking, we included the small sample sizes of “communication facility” and “possession charges” in our overall analysis of drug-related offenses.

Are you interested in sharing our study on drug-related federal sentencing in the United States? For noncommercial purposes only, you may share our project with colleagues and friends. We ask you to please link back to this original study to give us credit for our work, though.