Over the past several years, the state of Florida has grown exponentially and welcomed thousands upon thousands of new residents. People from all over the United States have been flocking to Florida for its low taxes, affordable real estate, booming job market, and year-round sunshine. From the South to the North, Florida has more to offer than most places, making it the ideal destination. South Florida has become such a popular destination for retirees and others moving from New York. It has been considered the “sixth borough” of New York. An estimated 33,565 people came to the region from New York alone between September 2020 and March 2021. The statistics show that 14,045 people moved to the Palm Beach area, 8,422 people moved to Broward, and 8,033 moved to Miami-Dade County.

As you might imagine, a state like Florida growing as fast as it has means that it’ll endure some issues along the way. Drug and alcohol abuse, as well as mental health issues, have plagued the state. Issues were prevalent prior to the influx of people, but when you continue adding to your population, these figures will also rise. According to the National Alliance on Mental Illness (NAMI), an epidemic is spreading throughout Florida. According to the article, mental illness can assert itself as paranoia and delusions that lead to violence, which happened recently when a lawyer shot three people at Florida State University before police were forced to take his life.

According to the same article, it’s the police officers and first responders in the mental health system. It’s corrections officers who deal with the mentally ill each day. We failed to see how wide and deep mental illness has become until it reaches crisis levels in the community. Nearly 70 percent of those who need mental health treatment in Florida can’t get it, highlighting a significant issue in how it’s handled. Either the resources aren’t available, or people don’t know how to access them, which is unforgivable. The state must do a better job providing resources to those who need help. Even worse, the statistics show how deep-rooted the problem has become.

Unfortunately, Florida ranks 49th in the country for mental-health programs and spends only $37.28 per person each year. For perspective, Mississippi spends four times as much on those mentally ill within their border. What does this all mean? Well, as Florida grows and becomes a superpower in the United States, more is needed to treat those struggling with mental illness. Although it’s challenging to find public health options, private options exist, and facilities like ours offer assistance for those enduring mental health issues.

Below we’ll take a look at how many people are struggling with mental illness throughout Florida.

The National Alliance on Mental Illness found that an estimated 660,000 adults and 181,000 children are living in Florida with severe mental illness. These include severe depression, bipolar disorder, or schizophrenia. Nearly 50 percent of the population will struggle with less devastating forms of these conditions at one point in their lives or another. Mental illness doesn’t discriminate based on age, gender, or socioeconomic background – it reaches into every class and touches each public agency. For that reason, it’s vital for the state to start investing more into treating these conditions and give the public peace of mind.

According to a National Center for Health Statistics (NCHS) study, an estimated 35.1 percent of Floridians were battling anxiety, ranking 27th-highest among all 50 states in the union. Anxiety is considered the most common mental illness and is highly treatable. It affects an estimated 40 million Americans each year. Despite its treatability, a mere 36.9 percent of people suffering will seek treatment. Whether that has to do with the availability of treatment or someone downplaying their symptoms and being afraid of the stigma attached to mental illness, getting people help should be our primary goal.

Why Is There A Stigma Attached to Mental Health Treatment?

It shouldn’t be too shocking to know that people with mental health issues admit that stigma and discrimination have an adverse effect on their lives. We also understand that people with these problems are among the least likely of any group to: 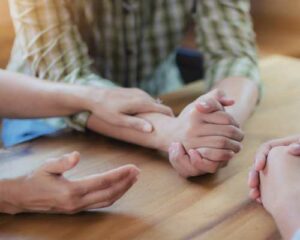 These stigmas not only make problems worse, but they can make it so that the person doesn’t seek help out of fear, leading to social isolation, unemployment, and poverty. Even worse, it can lead to suicidal thoughts or suicidal ideation. If you’re thinking about harming yourself, please reach out to the National Suicide Prevention Lifeline at 1-800-273-8255. You are not alone.

So, why are those with mental health issues stigmatized? Below are a few of the common reasons:

It’s time to start challenging the stigma and change how people think and act about mental health. If you’re someone battling mental illness and don’t know where else to turn, help is available to you. Below we’ll describe how you can get help and what you can expect.

Those struggling with mental health conditions often use drugs or alcohol to self-medicate and numb their symptoms, known as a co-occurring mental health disorder. Since many people are fearful of seeking help, drugs and alcohol are enough to combat their symptoms. While it may work in the short term, this is not feasible in the long term, especially if you develop a substance use disorder. You will need treatment to come off your substance of choice, especially if you’re using benzos or alcohol, which can lead to potentially fatal withdrawal symptoms.

This cycle of pain and addiction is not one you can break alone. Fortunately, if you seek out private treatment, you’ll work alongside therapists and counselors trained in working with those battling a dual diagnosis of substance abuse and mental health. Since no two cases are the same, our program consists of a customized treatment plan for each of those who walk through our doors. We offer the following treatment option for those seeking mental health treatment services in Florida:

If you’ve developed a substance use disorder, the first step in the continuum of care will be to enter medical detox. During this phase, you’ll be thoroughly assessed by our staff to determine what drugs you’ve been using and what mental health conditions you’re battling. Once they’ve determined this, you’ll spend a period of three to seven days as the drugs/alcohol exit your system. Once you’re deemed medically clear, you’ll move into the next level of care, which is a less intensive phase of care.

Depending on your history, you could end up in an inpatient treatment facility where you’ll live on-site for a period of up to 90 days. For those with milder symptoms and a safe home environment, they could opt for outpatient care. No matter which path you take, you’ll go through therapy sessions geared toward helping you understand the root cause of your condition and how you can treat the symptoms without drugs and alcohol.

You don’t have to suffer another day. Make sure to contact us for help.