The Big Game is behind us, and with spring approaching, sports fans have turned their attention to the NBA. Playoffs, the All-Star Game, and March Madness have fans preparing brackets and bets while gearing up to cheer on their favorite team.

Rituals for watching games can differ based on the sport, but many game gatherings usually come with friends, food, and a lot of booze.

We were interested in the drinking habits of NBA fans specifically and whether these habits differed based on the team for which they were cheering.

How much are fans drinking before, during, and after games? And how many are missing work the next day due to hangovers? We surveyed over 1,000 NBA fans to see which fan base tends to drink more and if the team’s performance has any impact on the amount of alcohol consumed. Keep reading to see what we found.

Tipping to the Team 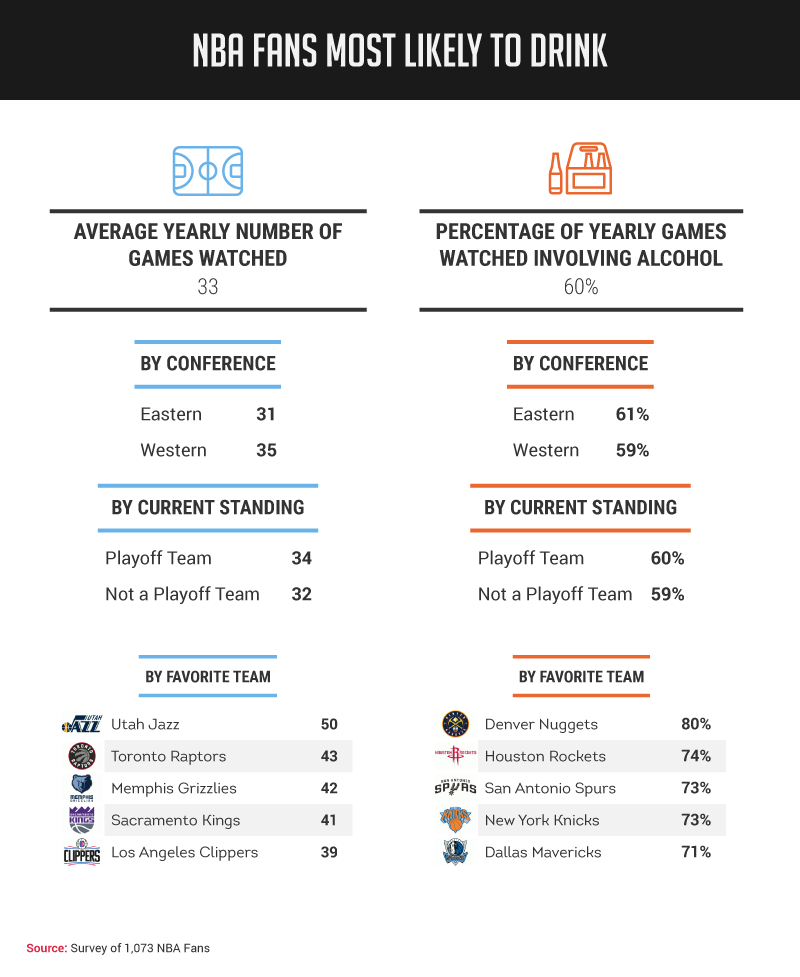 With 82 games during the regular season, it can be difficult to catch each one, no matter how dedicated of a fan. Overall, NBA fans watched an average of 33 games per year, with Western Conference fans catching slightly more.

Eastern Conference fans only saw an average of 31 games but drank during 61 percent of them.

The opposite pattern occurred when looking at teams by current standing. Fans of teams in the playoffs watched an average of 34 games, two more than their non-playoff counterparts, and drank slightly more often.

While playoff team fans drank for 60 percent of games viewed, fans of non-playoff teams drank while watching 59 percent of the time.

Fans drinking more while watching fewer games may just mean they are tuning in for bigger, better games, which call for more of a celebration or party-style viewing. Dedicated fans who watch the majority of NBA games likely watch to keep up with their team – a situation where drinking to root isn’t necessarily mandatory. 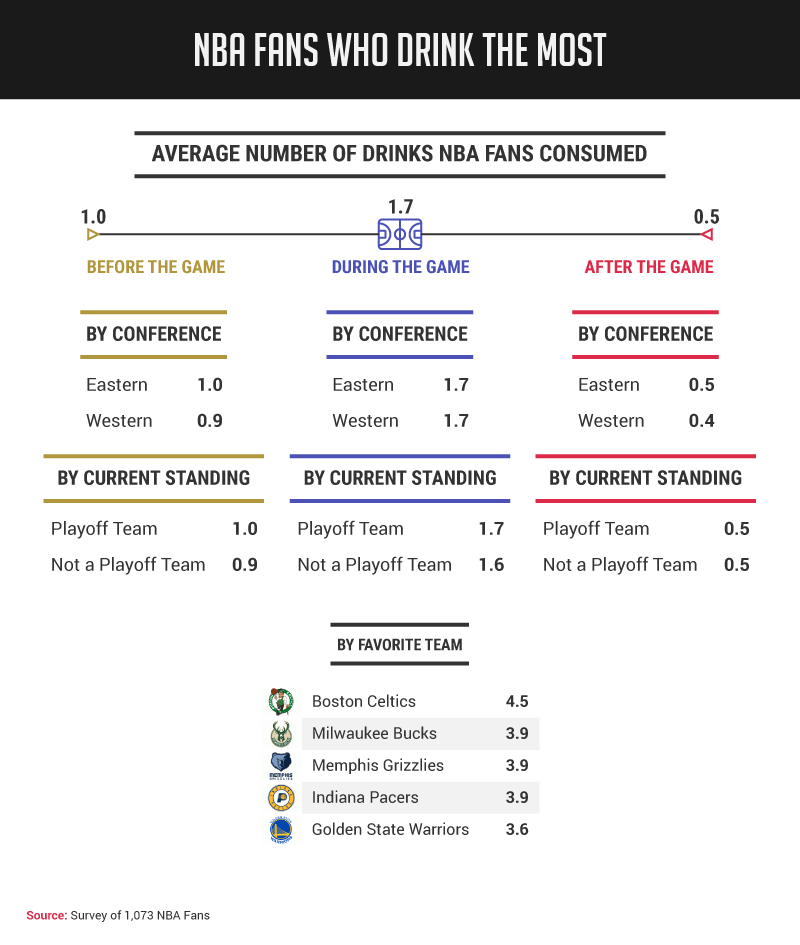 While not every game is viewed as a must-watch or a must-drink, fans who do combine hoops and alcohol tend to drink more during the game compared to before or after.

On average, NBA fans consumed one drink before a game, 1.7 drinks during, and half of a drink afterward.

The average number of drinks consumed before, during, and after games remained relatively the same when comparing Eastern and Western Conferences and teams in or out of the playoffs.

Still, Eastern Conference fans drank an average of 0.1 more drinks before and after the game.

Fans of teams in the playoffs also drank an average of 0.1 more drinks, but this time before and during the game. 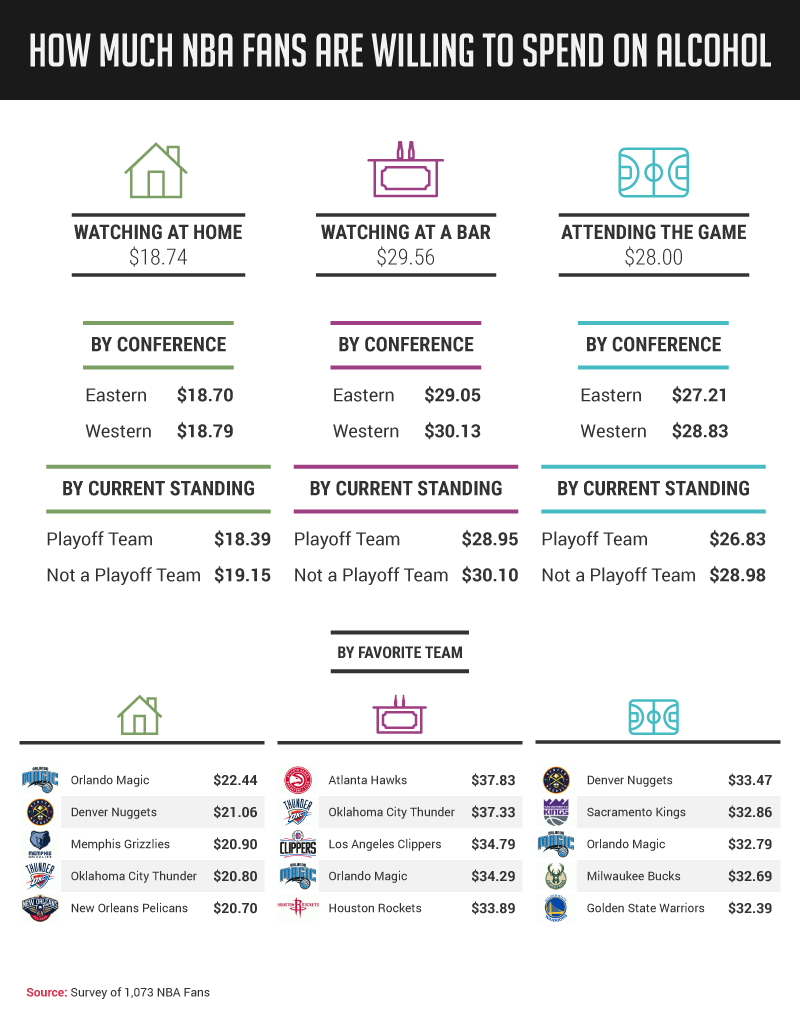 Even if fans aren’t sitting courtside, getting access to watch NBA games can cost a pretty penny. Some fans even spend almost $20 per month just for the ease of watching on a smartphone.

So how much are fans willing to dish out for drinks? If they’re watching at home, not that much.

On average, fans would spend only $18.74 when watching from their couch, but for booze at the bar, the average jumped to around $30. For those lucky enough to be in the arena to watch live, fans were willing to spend slightly less than at the bar, with an average of $28 for drinks.

While this could be due to the money already spent on a ticket, the increased prices of alcohol in sporting arenas may also play a role.

It makes sense to think fans would toss back more drinks if their team performed poorly, but that doesn’t seem to be the case.

Only a little over 15 percent of overall fans drank more alcohol as their team’s performance decreased.

Fans of Western Conference teams and non-playoff teams were a bit more likely to have their consumption change based on performance, with 17.1 percent and 16.3 percent, respectively, consuming more alcohol as their team’s performance faltered.

Fan bases of the Los Angeles Lakers and Washington Wizards were the most likely to increase their alcohol consumption, with almost 27 percent of each team’s fans being influenced by on-court performance.

Consumption rates were much more affected by the opposing team – 25.3 percent of all NBA fans drank more when their favorite team played a rival.

This time, fans of playoff teams were more likely to base their drinking off opponents, and Eastern and Western Conference fans were pretty equal.

While Boston Celtics fans averaged more drinks per game than any other fan base, they were also the most likely to increase their drinking when facing a rival.

Playoffs are an obvious cause for celebration, especially when your favorite team has made it, and drinking has become a huge part of watch parties.

So much so that each year fans create drinking games to keep enjoyment up even if their team is losing.

The amount of drinking that goes on when fans’ favorite teams are playing rivals also increases drastically when those games are playoff games:

The stakes are higher; the fans are rowdier; and, evidently, cups are fuller.

Of all NBA fans, around 38 percent drank more when their team played in the playoffs – that’s more than double the number of fans who increased their consumption when their team performed poorly.

Again, the Boston Celtics were the most likely to drink more for the big games – around 57 percent consumed more alcohol for the playoffs.

Fans of the Milwaukee Bucks and Utah Jazz weren’t too far behind, though, with around half of each fan base increasing consumption during the playoffs. 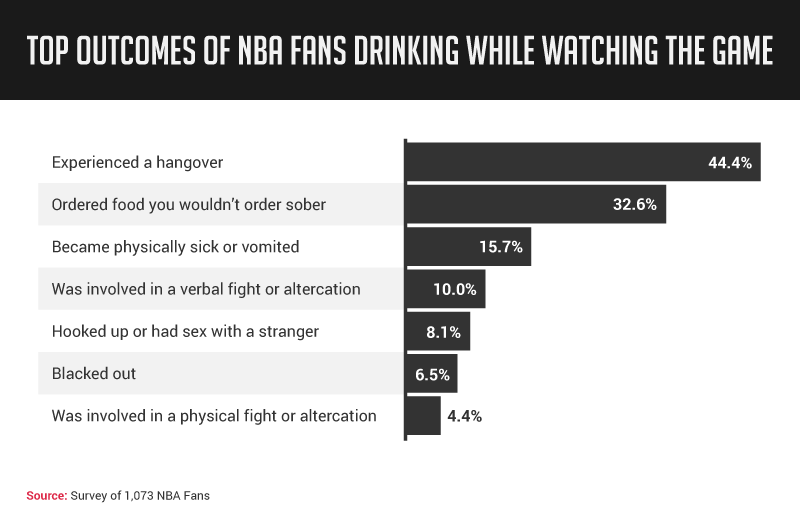 Win or lose, drinking while watching teams shoot hoops doesn’t always leave fans with hangovers. Over 44 percent of fans experienced a hangover the following day, but the second most common aftereffect was simply ordering food they normally wouldn’t order sober. While pretty harmless, almost 33 percent of NBA fans were guilty of this after drinking.

Although much less common, almost 16 percent of fans became physically sick or vomited after drinking while watching the game. Given that NBA games usually last around 2 hours and 15 minutes and the average fan consumes around three drinks per game, some fans are actually approaching the line of binge drinking, which can quickly cause consumers to get sick. 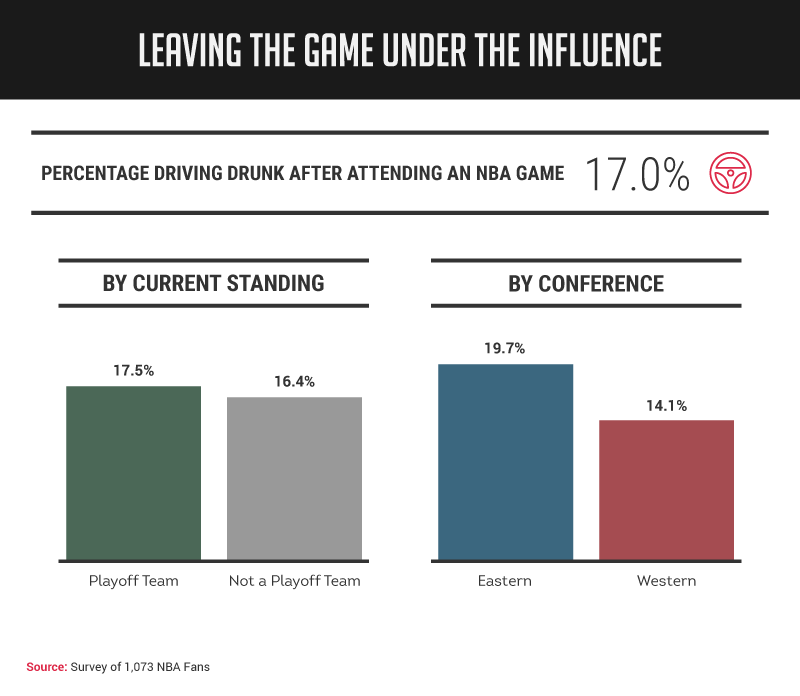 Still, many sports fans find themselves intoxicated at the arena and subsequently decide to get behind the wheel.

Although only 17 percent of NBA fans drove drunk after attending an NBA game, that number varied when looking at fans by conference.

In 2016 and 2017, drunk driving claimed the lives of almost 11,000 people, making driving under the influence the leading cause of highway deaths. Sporting events can be hectic to get out of, and getting picked up by a ride-sharing service amid a huge crowd can be frustrating, but skipping the few extra minutes it may take is not worth a life.

Knowing the risk that drinking and driving pose and the difficulty fans may have after sporting events, ride-sharing services like Uber have tried to make it easier to get home safely.

While the changes help, it’s really up to each fan to make the right decision.

Making it home safely is just the first step for fans after drinking at a basketball game.

Waking up the next morning with a raging headache and having to mosey on to work is another problem.

A problem that 43.5 percent of NBA fans have faced. Regardless of playoff or conference status, over 40 percent of fans from each cohort struggled with a hangover at work the next day.

While the difference between standings and conferences was slim, fans of teams in the playoffs and fans of Eastern Conference teams were around 3 percentage points each more likely to have a hangover compared to non-playoff and Western Conference fans.

The NBA playoffs and March Madness are an exciting time for fans, but with game watching heavily tied to alcohol consumption, drinking while watching can quickly turn into a bad situation. Whether it’s getting physically ill, a next-day hangover, or driving drunk, the risk simply isn’t worth it.

For those struggling with addiction, major sporting events can be more triggering than celebratory. If you or someone you know is struggling, the Delphi Behavioral Health Group is here to help point you in the right direction. We are a growing network of drug and alcohol addiction treatment facilities providing a range of care to fit your needs best. Visit us to talk to a caring expert or to get more information on addiction and treatment.

36.2 percent of our participants were women, and 63.8 percent were men.

Anyone who was not a fan of the NBA was disqualified from the survey.

If a team was in a playoff spot, they were grouped as a playoff team.

To accurately represent each team’s fan base, we set out to collected at least 32 respondents for each team. Most teams reached or surpassed this number, however, the Toronto Raptors, Oklahoma City Thunder, and New Orleans Pelicans had 29, 26, and 25 respondents, respectively. It is possible that with more respondents for each team, we could have gained more insight into this population. Our surveys also rely on self-report. There are many issues with self-reported data. These issues include, but are not limited to: selective memory, telescoping, attribution, and exaggeration.

Do you know an NBA fan who tends to overdo it on the drinks while watching the game? They may benefit from reading this study. We permit you to use this project’s information and graphics for noncommercial use. Just don’t forget to link back to this page to give the author proper credit.