Each year, the most crowd-pleasing, dance floor-filling, sales-generating songs are celebrated with a top 100 list curated by music authority Billboard . Electronic tunes, pop numbers, rap tracks – the gang’s all there.

But what can you expect to find when you peel back the shiny veneer of glitz and glamour that makes each of these songs so popular? What themes and messages are revealed when taking a closer look at the lyrics that accompany our favorite tracks? The answer: a lot of drugs and alcohol.

If you zoom out on the connection between music and substance abuse, the link runs much deeper than a few lyrical shoutouts to alcohol: LSD is known to be the ground zero of acid rock, and MDMA helped bring electronic music to the masses. The overlap between drugs, alcohol, and the music industry has also sent many prominent artists to their graves – one recent example is 28-year-old Avicii, a superstar DJ who struggled with addiction in an industry that thrives on nonstop partying.

Given these deep-rooted ties, we wanted to explore the most prominent drug- and alcohol-related themes in modern music. After analyzing Billboard’s “Hot 100 Songs” year-end charts from 2008 to 2018, we discovered which genres were the most explicit, which artists most frequently sing substances’ praise, and how these trends have shifted over the last 10 years. 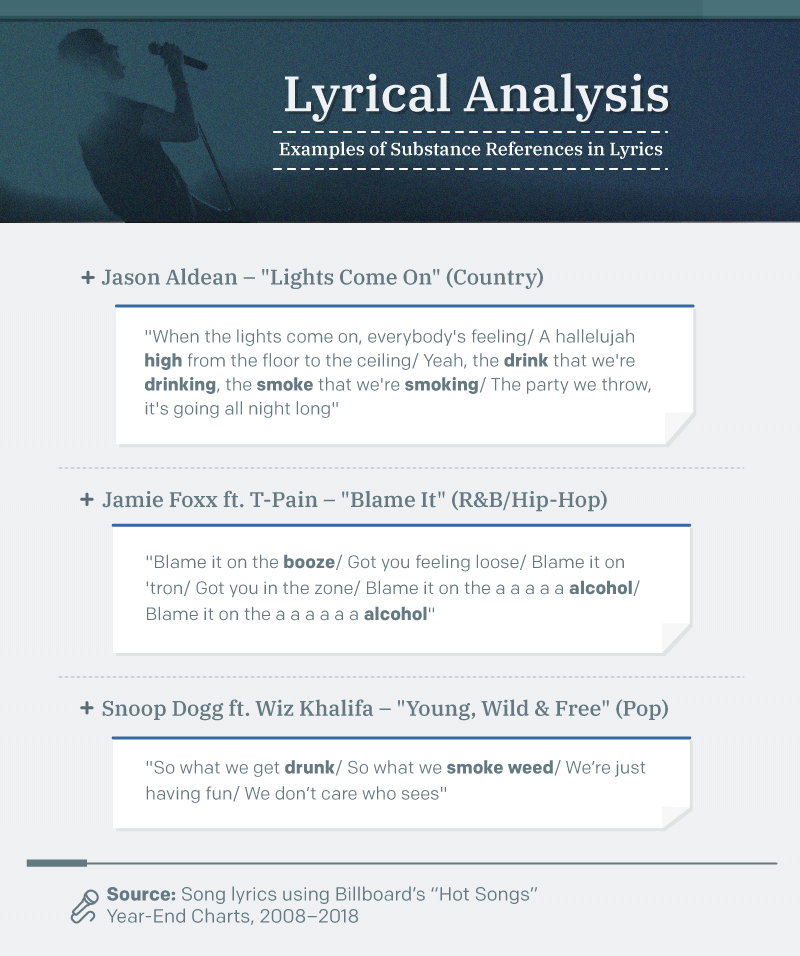 The overall prevalence of drug and alcohol references in mainstream music has fluctuated over time, but substance use has been a part of the music we enjoy for many years. With a range that spans from pump-up party jams to moody ballads that explore the dark throes of addiction, no one category of music is immune to the occasional (or frequent) mention of alcohol and drugs.

We pulled a few examples of substance-focused lyrics from different genres: Country crooner Jason Aldean, rapper and actor Jamie Foxx, and marijuana enthusiast Snoop Dogg were our chosen artists to highlight how universally applicable these themes can truly be. 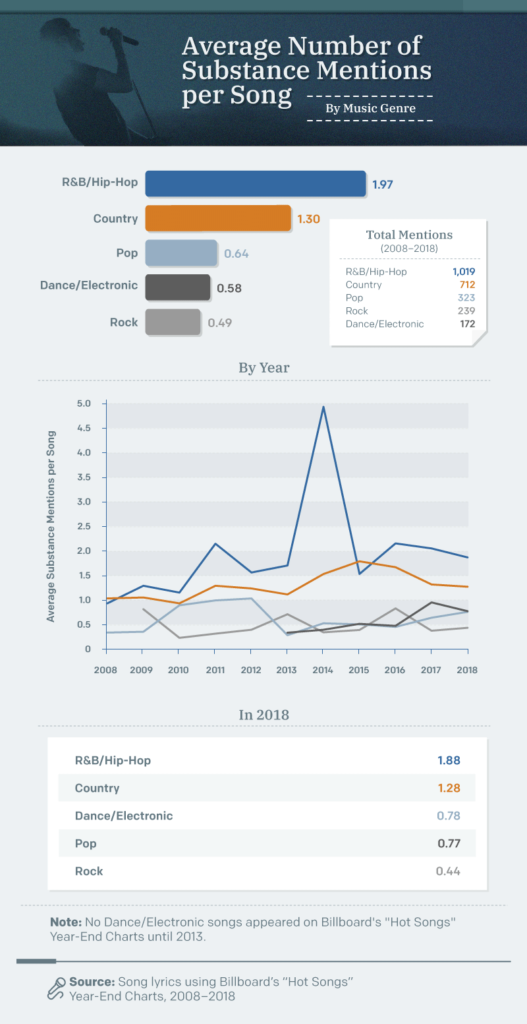 The R&B/hip-hop genre has a turbulent history with drug and substance abuse. One recent study by the University of South Florida drew a link between this category of music and drug use among young black adults, with 82% of study participants reporting that listening to hip-hop influenced their decision to try molly (ecstasy in its powder or crystal form). Following suit, this genre had the highest number of substance mentions, on average, with 1.97 drug and alcohol references for each track.

Between 2008 and 2018, R&B/hip-hop songs mentioned substances 1,019 times, topping the list of genres. Country music was second at 712 instances during that same period. Pop had 0.64 alcohol and drug references per song, followed by dance/electronic with 0.58 and rock at 0.49 mentions.

While 2018 was a particularly drug-saturated year in the emerging world of SoundCloud rap, each of the genres analyzed made fewer substance allusions than their 10-year average: R&B and hip-hop had 1.88 mentions per song instead of 1.97, a slight drop in the ten-year average. Country music also fared about the same, with 1.28 mentions in 2018 compared to a 1.3 mention average. A more prominent rise was seen in dance/electronic, with a gain from the decade average of 0.58 mentions per song to 0.77 mentions in 2018. 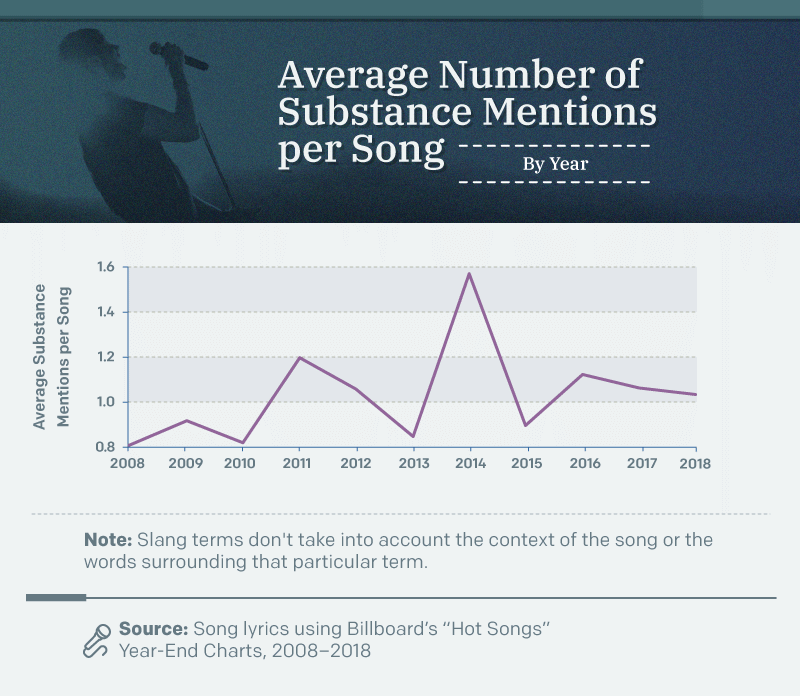 As time went on, artists and songwriters became bolder. 2014 was a particularly daring year in music, with substance mentions topping nearly 1.6 per song, on average. The most recent year in the data collection, 2018, fell somewhere in the middle, with around one substance-related shoutout included in the average song. 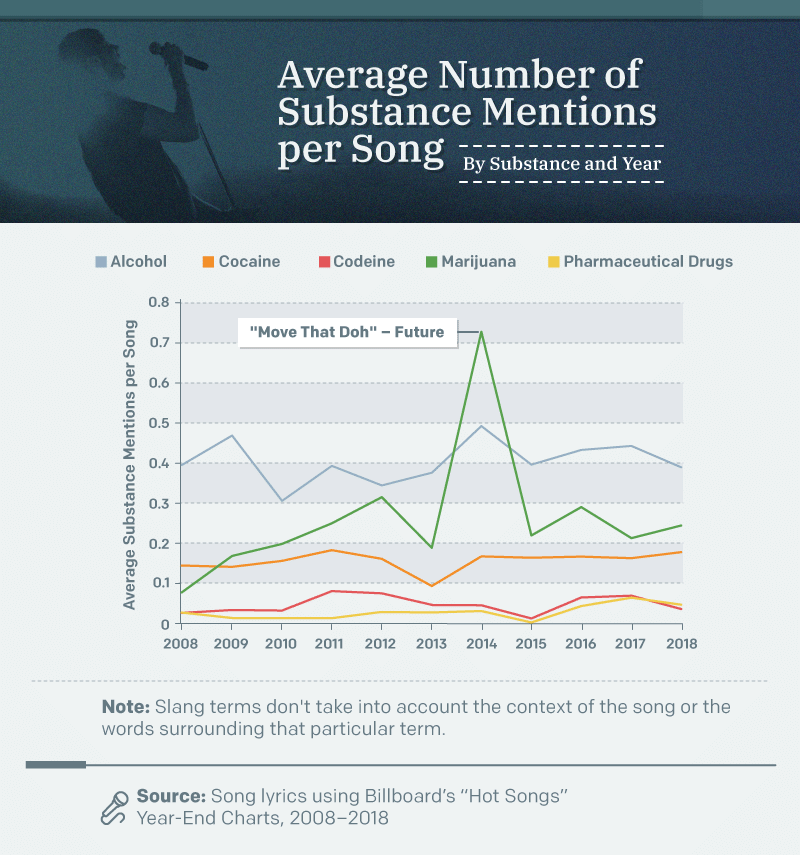 In the world of music, some substances are more popular than others. Over the last decade, alcohol stood out as a consistently prevalent presence in Billboard’s “Hot 100 Songs” lyrics, experiencing notable spikes in 2009, 2014, and 2017. Even for sober artists, making references to alcohol is considered by some to be a cornerstone of making music, particularly for those in the country genre: Not only can alcohol mentions draw in lucrative sponsorships with brands, but it is also a point of connection to Nashville’s well-known drinking culture.

Cannabis mentions have risen from near-zero reports in 2008 to a peak in 2014, with over 0.7 mentions of marijuana per song that year, the highest peak in our entire study. 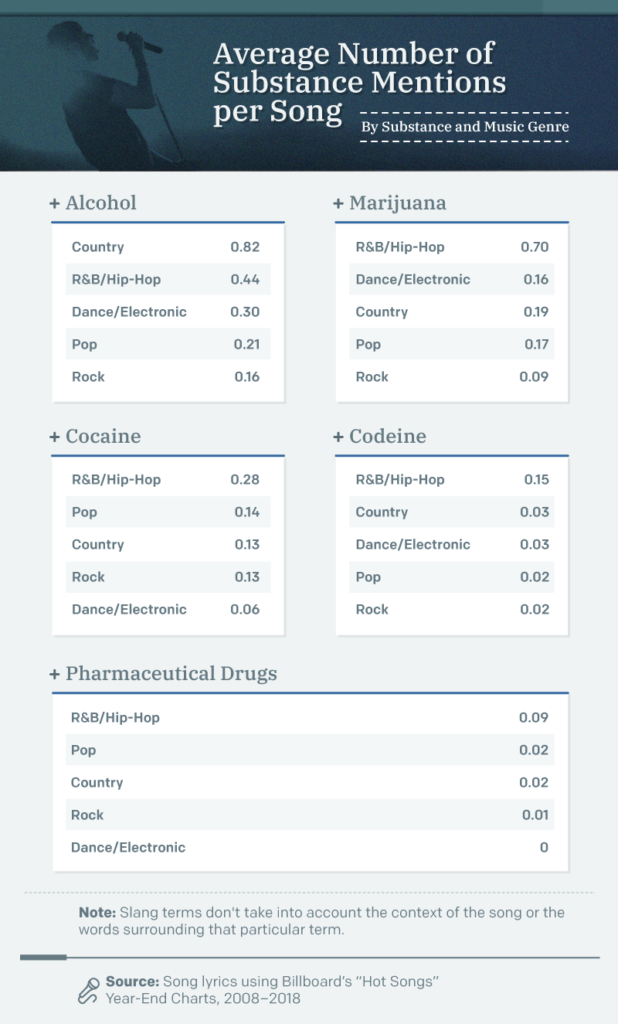 When it came to substance mentions per song, country music was the king of alcohol, with 0.82 alcohol references on average. Aside from that, the top spots for marijuana, cocaine, pharmaceutical drugs, and codeine were all swept by R&B/hip-hop.

Lean – a potent cocktail of codeine, soda, and (often) hard candy – is essentially a fixture of many R&B and hip hop songs. A recent profile article published about prolific rapper Future explores the influence of his reference-laced music on drug use among young fans and the burden associated with potentially encouraging them to dabble in dangerous substances. Another well-known rapper, Juice WRLD, has openly attributed his interest and eventual encounter with lean to Future’s lyrics. 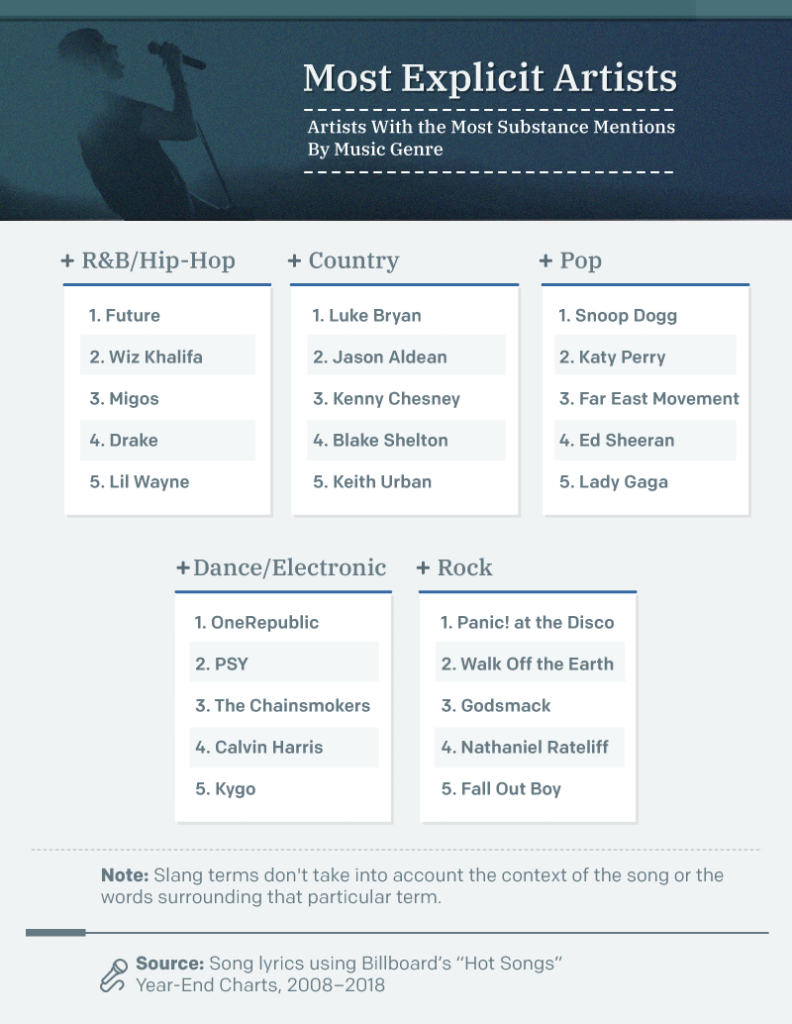 Future landed the top spot on our list of the most explicit R&B/hip-hop artists. Aside from his myriad references to substance abuse and the like, Future is also known for dropping some extremely sexually explicit lyrics. Wiz Khalifa and Migos took second and third place, respectively.

Snoop Dogg topped the pop list with the most substance mentions, followed by Katy Perry. Even though Snoop Dogg is a rap artist, some of the songs he has collaborated on fell into the pop genre. Luke Bryan swept first place on the country list, while OneRepublic was the most explicit dance/electronic group. Finally, 2000s icon and indie rock band Panic! at the Disco earned the No. 1 spot on the list for rock music.

Most Mentions per Musician 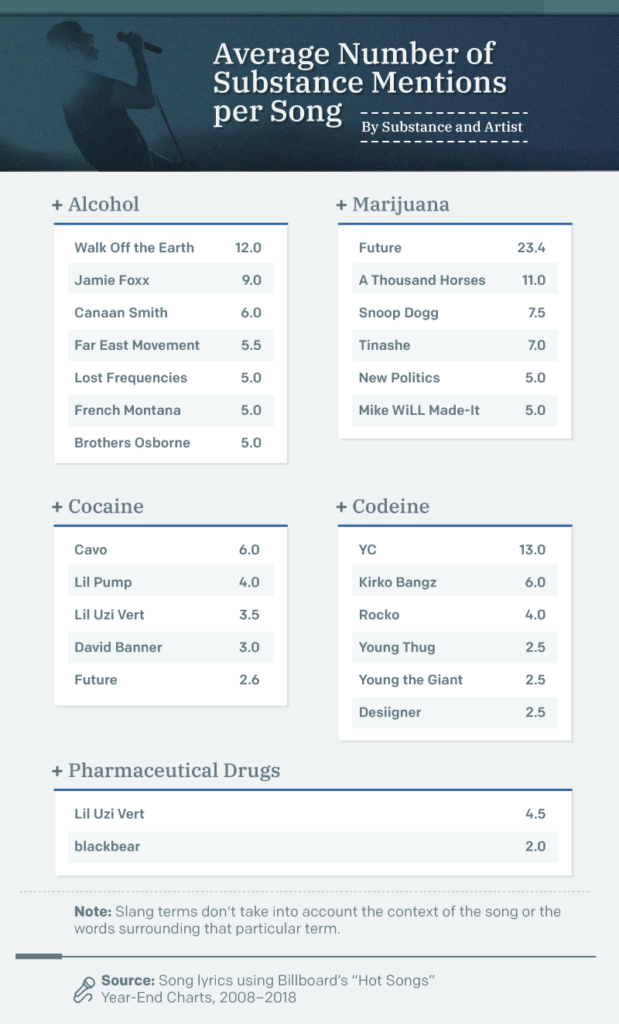 Snoop Dogg is best known for being surrounded by an inescapable cloud of marijuana haze and currently boasts his own microcollection of cannabis varieties via Tweed, a subsidiary of Canopy Growth. However, while his lifestyle may forever keep the cannabis crown affixed to his head, his music was ranked No. 3 when it came to marijuana mentions between 2008 and 2018. It was Future who sang the most about marijuana at 23.4 references per track, followed by country quartet A Thousand Horses at 11 mentions. 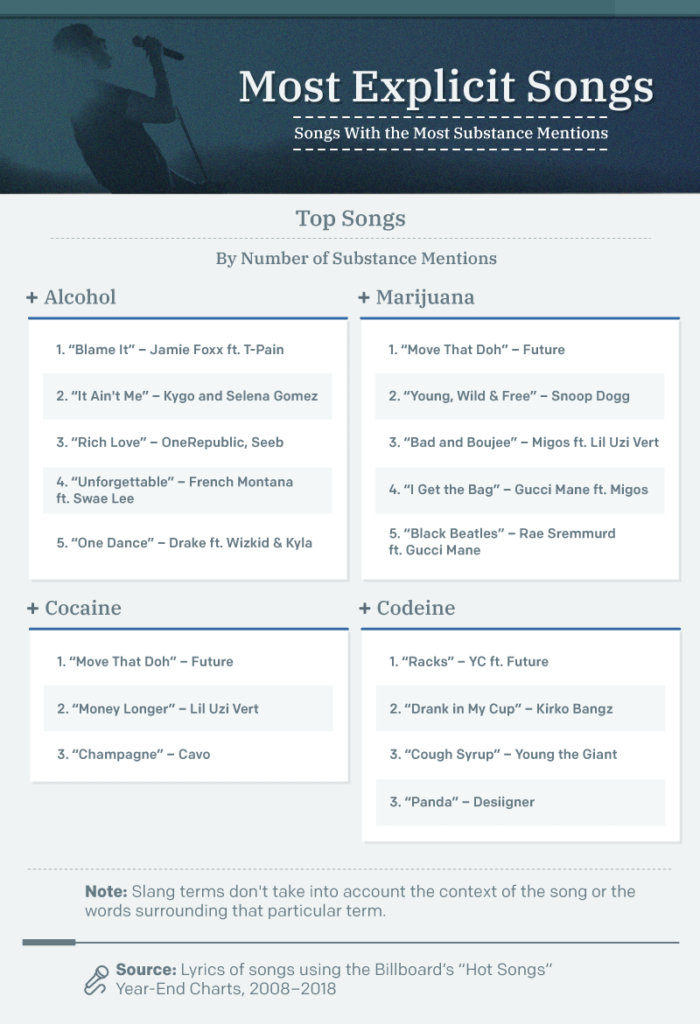 Have you landed yourself in trouble? If you ask Jamie Foxx, he might advise you to “blame it on the a-a-a-a-a-alcohol.” His “Blame It” tune earned Foxx and collaborator T-Pain the No. 1 spot for the most alcohol-related song, followed by Kygo and Selena Gomez’s “It Ain’t Me.”

On the whole, it was the R&B/hip-hop category that racked up the highest number of drug and alcohol mentions out of the five genres studied. While across the board mentions of nearly all substances rose over time, it was 2014 that marked a high point over the past decade. Marijuana shoutouts shot through the roof that same year.

Country was the genre that most frequently referred to alcohol, while hip-hop topped the list for every other substance from cocaine to codeine. Artists like Future and Jason Aldean accounted for the largest chunk of those references in their respective genres.

Drugs, alcohol, and music are intertwined on so many levels – but it doesn’t have to be that way. If you or someone you love is struggling to enjoy any part of life – including music – without the help of harmful substances, there are people who want to help. Delphi Behavioral Health Group offers a number of outpatient, sober living, and detox services, including a wealth of online resources to help you begin your journey to wellness. Visit Delphihealthgroup.com for more information about addiction, treatment options, and our wide range of services.

From these data, we counted the number of alcohol- and drug-related slang references in each song. Here is the list of slang terms that was used in this project. The categories that these slang terms could fall under are alcohol, marijuana, cocaine, codeine, and pharmaceutical drugs.

The use of slang terms does not take into account the context of the song or the words surrounding that particular term. As a result, artists may not actually be referring to that particular drug the term is associated with. In addition, using Billboard’s “Hot 100 Songs” year-end charts from 2008 to 2018 does not include all the songs the artist may have produced from 2008 to 2018. A particular artist only needs one song to make it on Billboard’s “Hot 100 Songs” year-end charts from 2008 to 2018. With that being said, this can skew artists’ average number of substance mentions per song.

The next time you listen to your favorite artist or song, you may want to listen more closely to their lyrics. If you want to share our findings for noncommercial purposes, please do – but don’t forget to link back here to provide our team credit for their work.