How Addictive is Xanax Really (and Why)

Some longer-lasting benzodiazepines have been prescribed to treat epilepsy and seizure disorders, but Xanax is a short-acting medication, so it is not effective for consistent treatment. Instead, doctors tend to prescribe this sedative to manage immediate problems as needed, and they do not recommend taking the drug consistently.

Xanax and Addiction to Benzodiazepines

The Food and Drug Administration (FDA) approved Xanax as a prescription medication in 1981. Generic alprazolam was more recently approved for prescription use.

The first benzodiazepines were developed in the 1930s, but they were not introduced as prescription drugs to the public until 1957. By the 1980s, benzodiazepines including Valium and Librium were among the most prescribed drugs in the United States.

With such widespread availability, benzodiazepines were also widely abused, and this sedative addiction was finally addressed by the medical community.

Now, the FDA notes that benzodiazepines like Xanax should not be taken daily for more than two weeks consecutively because the body develops a tolerance to, and dependence on, these substances very quickly. While dependence and addiction are not the same conditions, physical dependence may indicate abuse or addiction to a substance.

Dependence On Xanax Vs. Addiction

The National Institute on Drug Abuse (NIDA) notes the clinical difference between addiction and dependence.

When someone takes a drug—as a prescription medication including opioids or Xanax—on a regular schedule, the medication will adjust the user’s brain chemistry. Over time, this adjustment to how the brain manages neurotransmitters will become normal and the brain will need the drug to manage its chemistry. This is called physical dependence — when the brain requires the presence of a drug to reach chemical equilibrium.

Addiction is sometimes called chemical dependency because dependence is a feature of addiction, but it is not the sole defining factor. Instead, addiction is defined as a behavioral condition involving compulsive consumption of drugs or compulsive behaviors that release dopamine, serotonin, and other neurotransmitters.

Many people have become dependent on benzodiazepines to feel normal, but Xanax is particularly addictive for two reasons:

How Many People in the United States Abuse Xanax?

In 2009, Xanax and other benzodiazepines were responsible for the majority of the emergency room admissions caused by central nervous system (CNS) depressants. Since Xanax is one of the most widely prescribed drugs in the U.S., it is most likely to be mixed with other prescription drugs such as opioid painkillers as well as recreational drugs including alcohol or cocaine.

A Reuters article in 2016 reported that prescriptions for benzodiazepine drugs like Xanax have tripled in the past 20 years and fatal overdoses involving these drugs have quadrupled in the same time span.

Some medical professionals believe that this trend indicates that benzodiazepines are being abused in riskier ways. Although the increase in filled benzodiazepine prescriptions leveled off around 2010, overdoses remained at alarmingly high rates.

A medical study published in 2017 found that young adults ages 18 to 29 reported the highest rates of benzodiazepine abuse. The majority of club drug users are also in this group — people who consume more alcohol, marijuana, ecstasy/MDMA, and related substances — so benzodiazepine sedatives like Xanax are most likely to be mixed with other intoxicating and prescription drugs. Younger adolescents, however, appear to be abstaining from many substances of abuse except Xanax.

A PEW research report found that prescription painkiller abuse among high school seniors declined dramatically from 1 in 10 students in 12th grade in 2004 to about 4 percent of that demographic in 2017. Additionally, about 26 percent of high school seniors in 2014 reported abstaining from all substances, including alcohol, marijuana, and tobacco.

However, addiction professionals report seeing more adolescents struggle with addiction to Xanax. Many of them mix this sedative with opioids, which can be a deadly combination.

Why Does Xanax Lead to Dependence and Addiction?

With more GABA available in the brain because Xanax is bound to neurons’ receptors, the individual will feel calmer, relaxed, and even sleepy. 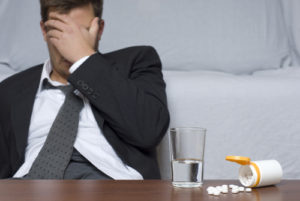 Alcohol acts on the GABA receptors as well, and this recreational substance is widely abused all over the world. Drugs that trigger this kind of relaxation in the brain quickly lead to addiction, as evidenced by how many people struggle with alcohol use disorder (AUD). However, Xanax is designed to bind to receptor cells in the brain faster than alcohol, so it may be more addictive because it acts so quickly.

For people who struggle with anxiety, feeling relaxed and at peace can be an addictive sensation. Doctors prescribe Xanax as needed, but someone with anxiety may take alprazolam more often, even regularly, because they feel like they need it to be normal. This is a form of prescription drug misuse or abuse.

Taking the drug specifically to feel relaxed or happy is abuse, and it can lead to addiction to the substance.

Finally, Xanax is very risky because it is often mixed with other drugs. This practice is extremely dangerous since Xanax can increase the intoxication of other substances.

People who take prescription opioids to treat pain may mix these drugs with Xanax, which increases their risk of accidental overdose. If you take a prescription medication and your doctor wants to prescribe Xanax for as-needed anxiety management, let them know what other prescription drugs you are taking before you begin Xanax treatment.

Nonmedical use of opioids and benzodiazepines like Xanax has been a serious and risky feature of the opioid addiction and overdose epidemic. More than 30 percent of opioid overdoses involve benzodiazepines, according to NIDA. Drinking alcohol on top of these drugs is even more harmful and too common.

If you find yourself taking Xanax more often than prescribed, craving the drug, or experiencing withdrawal symptoms when you do not take the drug, you may have developed a dependence on this sedative, or you may even struggle with an addiction to the medication. Treatment with an evidence-based detox and rehabilitation program is crucial to be drug-free in the long term