Librium, a prescription benzodiazepine drug used primarily for the treatment of anxiety disorders, has become a widely misused drug in the United States. Benzodiazepines play a significant role in the prescription drug abuse epidemic that has swept across the United States. In 2011, more than 52 million people in the U.S. reported having used prescription drugs for nonmedical purposes at some point in their lives. More than 6 million of those people had done so in the past month.

Whether being used for recreational or medical reasons, Librium has a high likelihood of causing tolerance to build, which will lead to dependence and addiction if not addressed appropriately. Especially in the case of recreational use, where dosages are not being monitored by a doctor, and the likelihood of mixing Librium with other drugs is high, overdose is of great concern.

How to Identify a Librium Overdose

As with most drugs, Librium users can potentially experience side effects when taking the drug. Most of the side effects are merely uncomfortable and will resolve on their own as your body gets used to the drug.

Indicators of a Librium Overdose

If you are witnessing any of the above symptoms, it is important to get medical help right away. The progression of an overdose can be unpredictable, and symptoms can worsen rapidly.

As a central nervous system depressant, Librium works by slowing down activity in the brain. It is possible for breathing to be suppressed to the point of stopping, causing a fatal overdose from Librium.

Doses that Can Lead to an Overdose 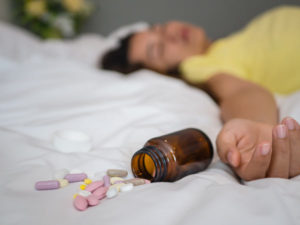 When medically prescribed, Librium comes in pill form in doses of 5 mg (milligrams), 10 mg, or 25 mg. Optimum and appropriate dosages vary from person to person based on genetic and physical characteristics as well as the severity of symptoms you are trying to treat.

People experiencing mild-to-moderate anxiety are recommended to begin with 5 mg to 10 mg of Librium up to four times a day. Severe cases of anxiety may require 20 mg to 25 mg three or four times a day.

In addition to limiting doses, it is important to be aware of any other drugs or alcohol you may be mixing Librium with. Mixing it with other depressants, such as alcohol or additional benzodiazepines, can increase the depressant effects of the drug and greatly increase your chances of a life-threatening overdose.

The greatest danger of a Librium overdose is that it can be fatal. Confusion reduced reflexes, and trouble breathing are all signs that you need to get help right away.

Because Librium depresses the central nervous system, an overdose can cause your breathing, pulse, and blood pressure to drop dangerously low. Many systems in your body are affected by a Librium overdose:

People who abuse benzodiazepines typically experience very poor outcomes. Additionally, they are most commonly abused in conjunction with opioids and alcohol, which can have disastrous effects on health.

How to Respond to a Librium Overdose

The active ingredient in Librium, chlordiazepoxide, can be poisonous when taken in excessive amounts, so it is important to respond swiftly. Once you have a recognized an overdose, call 911 right away. Medical responders can monitor bodily functions and treat life-threatening symptoms, if necessary.

When you call for emergency medical help, it is important to know the following information:

“While you wait for emergency medical help to arrive, it is important to keep the Librium user as calm and comfortable as possible. Do what you can to ensure the person has an open airway and is breathing as easily as they can be.”

Once medical help arrives or you make it to an emergency room, doctors may decide to perform a range of medical tasks. The focus will be on managing any present symptoms, beginning with monitoring vital signs, such as breathing and heart rate.

In the case of extreme overdose, flumazenil, a benzodiazepine antagonist, may be administered. Flumazenil works by reversing the sedative effects of benzodiazepines on the central nervous system.

The dangers of Librium use can be greatly reduced if it is taken responsibly and as directed by a doctor. Attempting to manage your own symptoms or administer dosages recreationally greatly increases your chances of experiencing serious side effects, like an overdose.

If you recognize symptoms of an overdose following Librium use, call 911 right away. Seeking emergency medical attention can prevent the overdose from becoming fatal.