How Is Librium Used For Alcohol Withdrawal?

Alcohol withdrawal can be an incredibly dangerous process, so patients often receive medications to reduce the risks they face. One example of this is Librium, a benzodiazepine that helps to control the anxiety symptoms of alcohol detoxification. This is not the only application of Librium, but it is one of the frontline medications used for alcohol withdrawal.

As a benzodiazepine, Librium can improve the mental health and emotional well-being of many patients who experience some of these effects as they go through alcohol withdrawal. The action of Librium on the brain to produce the GABA neurotransmitter assists with regulating anxiety and panic symptoms, controls confused thinking, and can even stimulate appetite (important for patients who are losing nutrition as the result of diarrhea and vomiting). In the right doses and with the right supervision, Librium also relieves tremors. 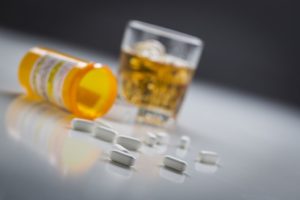 People who go through withdrawal from alcohol should receive an exact dosage of Librium. Benzodiazepines can be habit-forming, and introducing too much Librium to a patient who would benefit from the anti-anxiety effects of the medication might unintentionally make the patient dependent on Librium. This exact dosage will be determined by the nature of the alcohol abuse, the patient’s current mental and medical health status, as well as environmental factors that are unique to the patient, such as their family history.

Some people should not receive Librium at all, such as pregnant women and people who have a high chance of developing liver failure. Benzodiazepines are capable of crossing the placenta, so the developing fetus is highly vulnerable to the toxicity of most kinds of medication.

In 1989, the Medical Toxicology and Adverse Drug Experience journal wrote of a case where a 64-year-old woman, who was given Librium to help with the treatment of her delirium tremens as part of her alcoholic liver disease, exacerbated her liver problems to the point of persistent drowsiness, so the Librium was discontinued.

Librium, the brand name for the generic drug chlordiazepoxide, is a sedative tranquilizer. Once ingested, it induces a state of relaxation and reduced anxiety in patients. A drug that can do this is known as an anxiolytic drug, meaning that it inhibits anxiety.

Because of this, Librium is prescribed for the treatment of anxiety disorders, to reduce anxiety in other medical settings (before surgery, for example), and to address specific symptoms that are associated with alcohol withdrawal.

As a benzodiazepine, Librium gains its effectiveness from boosting the effects of the GABA neurotransmitter across the central nervous system. This neurotransmitter regulates electrical activity in the brain. In the case of many people, their brains are capable of producing sufficient quantities of GABA (gamma-Aminobutyric acid) for this purpose; many other people, however, have brains that cannot do this without help. Without enough GABA, the electrical activity in their brain is imbalanced, depriving those people of the ability to control their feelings and actions based on those feelings. Benzodiazepines like Librium rectify this by helping the brain moderate its nervous activity, which has the effect of regulating emotions, mood, and behavior.

Taking a benzodiazepine as prescribed helps the brain to increase the production of the GABA neurotransmitter, so a patient is no longer helpless when stressed or anxious. The medication induces feelings of tranquility and calm, even happiness, which helps them to better control their behavior and the mood behind that behavior.

As such, Librium and other benzodiazepines like it have been prescribed for the treatment of various anxiety-related conditions, such as anxiety disorders, insomnia, seizures, panic attacks, and alcohol withdrawal symptoms.

What are alcohol withdrawal symptoms, why are they so dangerous, and why is Librium so important in their treatment? Alcoholism is described as “one of the most dangerous addictions,” and its withdrawal symptoms can be similarly treacherous. Withdrawal refers to the physical and psychological effects of discontinuing alcohol use after the use has reached a point where the patient is physically and psychologically dependent on the effects of alcohol.

Alcohol is a depressant, and chronic exposure to it drastically slows down brain functioning and the way the nervous system communicates with the rest of the body. With time, the nervous system adapts to the state of being chemically subdued by the alcohol, and the sudden deprivation of alcohol throws dozens of systems connected to the central nervous system into disarray.

Alcohol withdrawal syndrome is the clinical diagnosis that describes how severe the effects of the process are. It can take days, weeks, or even longer run its course. Without proper medical care, it can be lethal. Alcohol withdrawal was the suspected cause of death of singer Amy Winehouse, who died at age 27 in July 2011.

Basic symptoms of alcohol withdrawal (in the first six hours from the time of the last drink) include:

In more severe cases of alcohol dependence, patients might experience seizures and hallucinations as they withdraw from drinking. One of the most dangerous and infamous symptoms of the process is delirium tremens (DTs), which encompasses global confusion (hallucination taken to neurological levels), hypertension (when the force of blood against artery walls is dangerously high), hyperthermia, and agitation. Around 5 percent of people who experience delirium tremens do not survive withdrawal.

The Dangers of Mixing Librium and Alcohol

The Dangers of Mixing Librium and Alcohol

The most fatal outcomes from benzodiazepines and alcohol occur when they’re used together. In many cases, these outcomes can be fatal. When Librium is mixed with any depressant, such as opioids, cough medicines, or other benzos, your odds of death increase dramatically. You’re likely to experience severe drowsiness, breathing issues, and even fall into a coma.

Although any depressant mixed with alcohol is dangerous, benzodiazepines are the most commonly linked to overdose deaths in the United States. When Librium and alcohol are taken together, users report drowsiness, dizziness and find it extremely difficult to concentrate. These two drugs can potentiate the effects of one another and stop the user from breathing normally, leading to the increased potency of the side effects. The two drugs together are so dangerous that various government agencies have issued official warnings about the impact of Librium and alcohol. The FDA has demonstrated the dangers of these two drugs.

Since the links between fatal overdoses from Librium and alcohol are so prominent, getting help is a matter of life and death. Those mixing central nervous system depressants are at increased risk of death. Getting help is vital.

For patients experiencing acute levels of alcohol withdrawal, Librium dosages would have to be higher than those typically prescribed for the treatment of anxiety. In typical situations, a dose of 5 mg (milligrams) to 100 mg, every two-to-four hours, is enough.

“However, for patients who have particularly severe withdrawal symptoms, a doctor might increase the dosage to 200 mg a day. This will require very careful observation to ensure the patient does not develop a dependence on Librium, and that there are no negative reactions between that much Librium and the remaining alcohol being purged from the body.”

As with most forms of medication used for alcohol withdrawal, the American Family Physician journal clarifies that the goal is to bring the amount of medication down to the lowest possible level that the patient needs to cope with the withdrawal symptoms. This means that Librium should not be used for an extended period because there is the risk of developing a dependence on the medication, and it might make the patient more tolerant of the drug — that is, the patient gets so used to the administration of Librium that increasing amounts are then required to achieve the same effects. The calmness induced by the GABA neurotransmitter boost can become a source of psychological addiction, especially in the case of patients who are experiencing anxiety as a result of their alcohol withdrawal.

To minimize the risk of improper use of Librium during alcohol withdrawal, the person will likely receive medication and therapy during and after the withdrawal process. This ensures that Librium is used to its full effectiveness while exposing the person to a full complement of nonaddictive treatment options. Such options might include supplements and vitamins to replenish nutrients that were lost during the alcohol consumption and withdrawal process. USA Today, for example, writes of how patients receive a combination of vitamins, benzodiazepines (specifically mention Librium), and other drugs to prevent seizures.

Additionally, family, peers, spiritual counselors, and social activities can create an environment of support that provides a complete recovery framework, instead of purely depending on Librium to do that work. This full complement of therapy can take years. For many people, it is a lifelong commitment.

Librium’s effectiveness in the use of alcohol withdrawal has resulted in several organizations deploying it. Officials at the Hancock County Jail in Maine administer Librium to inmates who are going through withdrawal. The decision to provide the drug, and the administration thereof, is done in consultation with the onsite nurse practitioner. As with a traditional treatment program, inmates are given opportunities to enroll in long-term rehabilitation courses to help them adjust to life outside prison and cope with stress and anxiety without the use of alcohol.

The same principle applies to those who are not part of the criminal justice system. Librium is a useful tool for drug withdrawal, but it cannot, and should not, be used in isolation. With careful prescribing and supervision, Librium can control the anxiety symptoms of drug withdrawal and then prepare the patient to receive the therapy needed to stay clear of the temptation to abuse alcohol again. Without Librium, that therapy and preparation might never happen.

Signs and Symptoms of Librium and Alcohol Addiction

Although benzodiazepines serve a vital purpose in treating those with insomnia or anxiety, it’s hard to distinguish between therapeutic use and addiction. Since chlordiazepoxide and alcohol both lead to dangerous withdrawal symptoms, getting professional help is the difference between life and death. However, how do you tell when you’ve become addicted? When your anxiety is managed, you’re sleeping better, and your seizures are under control, how can you determine when you’ve become addicted to Librium? One sign is when you need alcohol or Librium to avoid withdrawal symptoms, but what are some others?

Benzodiazepines produce a calming effect, and they’re highly sought out by drug users and doctors alike. Those who abuse them are at increased risk of developing a substance use disorder and a whole host of other symptoms. Below, we’ll discuss the most common psychological, physical, and behavioral symptoms of benzodiazepine abuse. These include the following:

Due to the natural process of tolerance building, you’ll need a higher dose to reach the desired effects. This can occur in as little as two weeks after starting benzos. For this reason, many people will abuse alcohol to potentiate the effect of Librium since tolerance has made it impossible to get high anymore. At this point, you’ll likely experience withdrawal symptoms when you can’t get Librium, or you stop drinking. Benzodiazepine and alcohol withdrawal are extremely dangerous and sometimes life-threatening. For that reason, you must get professional medical treatment.