Xanax and Blood Pressure- What is the Relationship?

Anxiety and panic disorders were once misunderstood mental health issues. Thankfully, various methods have been invented to help with these problems.

As scientists continue to do research, they are finding various links between the mind and body. Anxiety and blood pressure are linked, and Xanax is connected to the effects of both. People who take blood pressure or heart medications should probably not take Xanax because it can cause adverse interactions.

Though Xanax and other benzodiazepines can induce a feeling of calm, they can also increase blood pressure, which can be problematic if you are taking other medications to regulate it.

According to Psychology Today, anxiety causes a temporary rise in blood pressure. If these episodes of blood pressure increase keep happening, they may harm the heart, kidneys, and blood vessels.

In addition, the regular use of antidepressants could increase a person’s blood pressure. Anti-anxiety medication such as Xanax could also play a role in the rise in blood pressure.

This is because they are habit-forming, and becoming addicted to or dependent on a drug also causes anxiety. Thus, anxiety and higher blood pressure become a cycle, making it hard to know which one causes the other.

According to Mayo Clinic, anxiety itself could increase a person’s blood pressure because they may turn to unhealthy ways to cope with it, such as smoking cigarettes, overeating, or drinking alcohol.

The Heart & Vascular Institute at John’s Hopkins University states that scientists are still studying the role of anxiety in heart disease, but the two do seem closely intertwined.

Research at John’s Hopkins indicates that heart disease leads to heart attacks, which could cause a person to respond with post-traumatic stress disorder. This is because:

Xanax Dependency and Its Role in Anxiety

Xanax may be able to help people with anxiety, but it is not meant to be used as a long-term treatment for this problem.

In 2014, a woman named Jenna talked to Fox News about how Xanax affected her after eight years of use. She mentioned that she passed out, and two days later she was having trouble with everyday tasks such as drinking water.

Jenna said she had run out of Xanax when she passed out, and her mother found her in the fetal position during a visit. 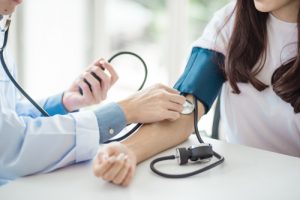 Thankfully, she was taken to the emergency room and given a similar benzodiazepine.

The article mentioned that people can build dependency on Xanax in as little as a month, even after taking it as a person’s doctor ordered.

Some people may quit taking it suddenly because they fear they are dependent on Xanax, but this leads to withdrawal.

The problem with Xanax dependency and associated symptoms could be connected to several factors:

What About People With Previous Blood Pressure or Heart Issues?

Xanax could interact adversely with certain blood pressure or heart medications. This does not necessarily mean an individual cannot take Xanax, but that is why disclosing anything one is taking — prescriptions, over-the-counter medication, or even supplements — is important.

Doctors can take the right precautions if they have a full understanding of a person’s medical history. Even so, patients who have been prescribed Xanax should pay attention to its common side effects and talk to a doctor about alternative treatments if they notice certain symptoms such as:

Many of these side effects of Xanax are quite rare, but they are probably not expected and could even cause a person to feel more anxious as a result. Again, this often results in a cycle in which the drug used to treat the problem could cause anxiety or worsen it.

Xanax could also cause sleepiness in people, and they should not operate machinery or drive when they begin taking it.Psychology Today says that people who have anxiety or heart issues can consider other methods to feel better if they would rather avoid the risks of taking benzodiazepines like Xanax. Exercise, meditation, healthy eating habits, and therapy require more time, but they rarely create the types of problems often attributed to Xanax.