They are in your bathroom cabinet, your purse, and in every corner store. When you need them, you can get over-the-counter (OTC) medications at a moment’s notice, without needing permission from your doctor or anyone else.

Access to the medications is important, it helps people get quick and affordable relief to a variety of common ailments.

In fact, according to the Consumer Healthcare Products Association, there are about 60 million people in the United States that use OTC medications, who don’t otherwise seek healthcare.

However, the fact that certain medications are legal to buy without a prescription leads some people to believe that they are harmless. As a result, people may use them carelessly and some people intentionally misuse them, a trend that seems to be growing.

Every drug comes with warnings and side effects, and it’s not just to protect companies from liability. Most drugs have common and rare side effects and some can be dangerous. You should approach any substance that has chemical effects on your brain and body with caution. However, in some cases, abuse can lead to dangerous adverse reactions, dependence, and addiction.

Learn more about which over-the-counter drugs can be dangerous, who’s using them, and how they can be treated.

Over-the-counter medications are among the most easily obtainable pharmaceutical substances on the market. They typically have the lowest drug scheduling from the federal government and enjoy relatively free trade with little regulations—until people find a legitimate use for them.

OTC drugs are a major part of American life and the average household spends $338 on OTC medication annually. While the average American only takes about three trips to the doctor per year, we take 26 trips to drug stores and pharmacies each year. Research also shows that 81 percent of adults are inclined to use OTC medications as a first response to a variety of minor ailments like headaches, body aches, nausea, colds, and allergies.

Though they are legal, and access to these types of medications is important, it does come at a price. Certain OTC drugs can have side effects that cause euphoria, excitement, and relaxation that make them attractive to some recreational users. The phenomenon of getting high on OTC drugs isn’t as common as other illicit and legal drugs that are easy to obtain like alcohol, marijuana, and heroin. Still, there are a few reasons a person might seek out OTC medication to achieve a desired high. But who is using over-the-counter drugs recreationally? 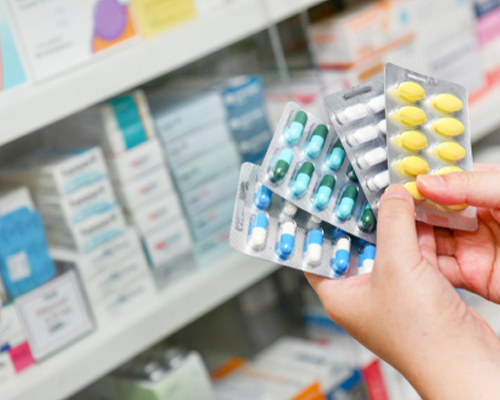 Younger teenagers are often the largest demographics to try alternative and easily accessible ways to get high. For instance,inhalants (volatile chemicals found in household products that can cause psychoactive effects when inhaled) are commonly used by young adults that are still in high school because they are so easily accessible.

Likewise, teens may also use OTC medications as a way to experiment with legal drugs that are easy to use. Illicit drug use among teens has seen some decline over the past decade but this could be because more are turning to prescriptions and OTCs. They may also mistakenly believe that OTC drugs are safer to abuse than illicit drugs.

OTC medications can be mixed with illicit drugs, other over-the-counter drugs, prescriptions, and other substances to create unique experiences for drug users. Alcohol is often involved in drug cocktails which can have potentially deadly effects. In some cases, prescription strength drugs are combined with their OTC counterparts to increase the effects and achieve euphoria; however, this can lead to an overdose. Mixing psychoactive substances can be an especially dangerous, even if it involves legal drugs. Pay close attention to warnings on labels and, when in doubt, look up potential contraindications before using drugs together.

As the opioid epidemic continues to grow in the United States, the addicted population is skyrocketing. This drug crisis is starting to affect new areas beyond just opioids and overdose. In addition to having a negative impact on crime rates, prostitution, homelessness, and infectious diseases, opioids may be increasing the rates of OTC abuse. Certain OTC medications contain codeine, a mild opioid that relieves diarrhea, coughing, and pain. When some people find that their opioid addiction is too expensive or difficult to maintain with illicit drugs or illegal prescriptions, they turn to OTC drugs containing codeine. However, it usually means taking massive doses of the drug, which can lead to overdose and other health complications.

There are a variety of over-the-counter drugs that can be dangerous if they are abused. However, most recreational use is centered on just a few medications that are commonly abused or used in recreational drug mixtures, including:

One of the most common OTC medications that have made their way into recreational use is cough syrup. Both prescription strength and some OTC cough medicines contain codeine, which is an opiate that’s similar to morphine, though much less potent. Codeine is a naturally occurring alkaloid found in poppy plants, which has been used as a cough suppressant for over a century. Today, codeine is one of the most commonly used opioids in the world.

In over-the-counter cough medicines, codeine exists in very small amounts. With normal use, you probably would never feel some of the euphoric effects opioids are known for. However, extremely high doses can have potent effects.

Cough syrup is also used as an ingredient in a drug cocktail called sizzurp or purple drank. Sizzurp gained notoriety in 1990s hip hop culture and the concoction can cause euphoria, lethargy, drowsiness, dissociation. In addition to codeine, the drink contains promethazine (also found in cough medicine), soda, and sometimes a Jolly Rancher.

Sizzurp’s sweet flavor and the fact that the active ingredient is only an OTC, and sometimes prescription strength, the cough medicine is attractive to first-time users. However, codeine can slow your breathing in high enough doses and promethazine slows down your central nervous system. In high enough doses, it can lead to respiratory depression and death. The drink is often combined with alcohol, which increases the likelihood of dangerous effects. Codeine is also addictive in high doses and can lead to dependence and withdrawal.

Dextromethorphan, or DXM, is another common active ingredient used in OTC cough suppressants. It’s often used recreationally and, in high doses, it can cause dissociative effects like ketamine and PCP. When consumed orally, only 11 percent of the original concentration makes it into the bloodstream. For that reason, some users inject the drug directly into their veins. However, intravenous use has been linked to a condition known as Olney’s lesions, which is a form of brain damage.

DXM in high doses has a number of adverse effects including dependence and withdrawal. Side effects like dizziness, sedation, confusion nausea, and vomiting can be exasperated when the drug is used alongside alcohol or marijuana.

Loperamide is a drug that’s sold under the brand name Imodium and it’s commonly used as a diarrhea medication. Imodium also contains small amounts of codeine, which can cause mild euphoria when abused in large amounts. However, in very high amounts, loperamide can cause constipation, ulcers, and cardiotoxicity, which means that it can damage the heart and cause serious cardiac symptoms. People who abuse Imodium have been observed with heart arrhythmias that can lead to cardiac arrest.

Can You Overdose on OTC Medications?

Though they are legally purchased over-the-counter, many medications come with strict warnings and recommended dosages for a reason. Overusing and abusing OTC drugs can lead to serious health complications, addiction, and overdose. Cold medication containing DXM or loperamide contain small amounts of potentially dangerous substances. When you take extremely high amounts of a psychoactive substance, you run the risk of falling victim to the drug’s toxicity. Toxicity refers to a drug’s ability to damage a part of your body.

“Over-the-counter drugs typically have very low levels of toxicity but in high enough doses, they can cause some serious damage. Some drugs, like Imodium, can even do damage to vital organs like your heart. In high doses, the drug’s normal function can be damaging as well. In some cases, drugs like Advil and Imodium can cause ulcers and stomach bleeding because their normal actions go into overdrive.”

The labels on OTC medications will tell you warning signs of a serious reaction, many of which might be present during an overdose. Read the labels carefully and avoid taking more than the recommended doses. If you see or feel symptoms of an overdose, it’s important to seek medical attention immediately.

If you or a loved one is struggling with an addiction to OTC medications or if you’ve been abusing drugs of any kind, Delphi Behavioral Health Group might be able to help you overcome your potential substance use disorder. To learn more about OTC drugs, addiction, and how it can be treated, call our addiction treatment specialists at 844-605-0706 and speak with someone at any time. Addiction is difficult to overcome on your own, but quality treatment services from qualified people can help you achieve long-lasting recovery. A call might be the first step on your journey to sobriety and a productive life.