Hydrocodone is one of several modern, synthetic derivatives from morphine. It is used in prescription opioid painkiller medications like Vicodin, which are prescribed for moderate-to-severe pain after an injury or a surgery.

Hydrocodone Withdrawal is Uncomfortable, so Medical Supervision is Important

Quitting cold turkey can be uncomfortable, even if you take hydrocodone as prescribed. There are three stages to hydrocodone withdrawal, with the entire process lasting between seven and 10 days.

Beginning stage: In the first one to three days of withdrawal, your body is trying very hard to regulate brain chemistry and sensations. Your brain has become dependent on the presence of opioids binding to opioid receptors to prompt the release of neurotransmitters that regulate mood and trigger the reward system. A cluster of nerves in your gastrointestinal system also has become used to the presence of opioids moving through the gut, which impacts your digestion, typically leading to constipation and reduced appetite.

If you stop taking hydrocodone suddenly, as your body processes the drug out, you will begin to feel various symptoms such as:

These symptoms may feel like you have a cold or the flu, but they usually feel manageable. You also may develop intense cravings for the drug, which will be more difficult to manage if you are alone. 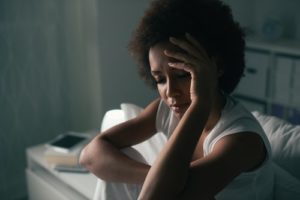 Peak stage: Between days three and five of quitting hydrocodone, your feeling of having the flu will be at its worst. You will struggle with joint aches, muscle pain, fatigue, depression, anxiety, difficulty sleeping, nausea, diarrhea, stomach pain, and general malaise. Cravings will be hardest to avoid during this time. The peak symptoms of withdrawal require professional help or medical supervision to manage.

Decline stage: After day five to seven, you should begin to feel physically better. You may still get goosebumps, nausea, diarrhea, or muscle aches, but you will not feel so sick anymore. You may still experience mood swings, agitation, insomnia, and cravings. Psychological symptoms take longer to clear up, especially if you do not have social or medical support from a therapist, physician, or addiction specialist.

Without medical oversight, you may be at risk for post-acute withdrawal syndrome (PAWS). This condition often develops in people who abuse opioid drugs like hydrocodone for a long time, and in particular, those who try to quit cold turkey and relapse. However, it can develop in people who have not abused a lot of hydrocodone for very long or who have never tried to quit before; it is an individual experience.

While there are three stages of hydrocodone withdrawal, these may be substages of the first true stage of withdrawal — the acute stage, when symptoms are their most intense. For many people, the second full stage is post-acute withdrawal, in which symptoms linger for weeks or months. These symptoms are more likely to be psychological than physical, but their continuance or sudden reappearance may be disturbing, especially if you have not entered a rehabilitation program and do not have medical oversight.

“People who abuse opioids like hydrocodone for a long time are more likely to develop PAWS than other kinds of drugs, especially if you have tried to quit before but relapsed after a few days. You may experience a reemergence of pain or feel more sensitive to pain. You may struggle with depression and anxiety, have trouble sleeping, and sometimes feel like you’re on the verge of catching a cold or the flu again.”

You are very likely to crave hydrocodone because your brain chemistry is still balancing itself, and your brain’s reward system wants the stimulation of the opioid again. Your brain’s structure may have changed while you struggled with opioid abuse, making it more difficult for you to cope with physical and emotional stress.

The effects of PAWS are some of the biggest reasons to get help from a detox and rehabilitation program that specializes in opioid addiction. If you relapse after the acute withdrawal phase, you are at risk of overdosing on hydrocodone. Your body is no longer used to higher doses of the drug, which can suppress your breathing and lead to hospitalization. Getting help from doctors, nurses, therapists, and social workers means that you have the medical and social support you need to overcome physical dependence on narcotics, learn about addiction and how to manage the stress associated with it, and stay sober.

Get Help From A Detox Center Specializing in Opioid Abuse

If you struggle with hydrocodone addiction, you need help with ending your physical dependence on opioids. This requires medical supervision, and you may need a prescription for a type of medication-assisted treatment (MAT).

A detox program that staffs medical professionals will use measurements to determine the severity of your withdrawal symptoms. The Clinical Opiate Withdrawal Scale (COWS) is a good example of the type of information a physician at a detox program will use. They will measure your vital signs, like blood pressure and heart rate, and then ask you questions about how you feel. This information, combined with what the doctor knows about your history of substance abuse, can inform whether your hydrocodone withdrawal symptoms are intense enough to require MAT like buprenorphine, to ease your body off physical dependence on narcotics.

Some people do not need MAT. For these individuals, consistent monitoring for a couple of weeks, along with over-the-counter medications to counter physical pain or nausea, can help with symptoms of withdrawal. Working with social workers and therapists during this time can help you stay focused on detoxing from the drug.

Many people who abuse hydrocodone or other opioid drugs need MAT, however. Buprenorphine is one of the most popular tapering medications available. If you receive a buprenorphine prescription, your doctor will work with you to taper off this drug, which can help you feel normal and not feel sick while your body slowly stops needing the opioid receptors in the brain triggered.

It is important to look for state and local licenses, along with additional credentials, when researching detox programs. You should also learn if they use MAT, which is often the safest approach to managing opioid withdrawal.

Although the drug has been a prescription medication for decades, it became popular, alongside oxycodone, in the late 1990s and early 2000s, as prescribing practices with opioid drugs relaxed, and doctors began prescribing these medications to treat a wider range of pain.

While most opioid analgesics are Schedule II, according to the U.S. Drug Enforcement Administration (DEA) and Controlled Substances Act (CSA), hydrocodone was Schedule III until October 2014. This meant that doctors could prescribe hydrocodone painkillers with some refills. Instead of patients returning each month to their physician to monitor their pain levels and how often they needed refills of this addictive opioid substance, a patient could get several refills before returning for a checkup.

In 2014, the DEA moved hydrocodone to Schedule II so that it could be more tightly controlled because this opioid painkiller was found to be one of the leading causes of opioid addiction. In the early 2000s, wider prescribing of narcotic painkillers led to misuse, abuse, and diversion of these drugs, and millions of people all over the United States now struggle with addiction to narcotics because of prescription medications.

In 2016, more than 11.5 million Americans reported misusing or abusing opioid prescriptions at least once in the past year, according to the Centers for Disease Control and Prevention (CDC). Hydrocodone, although Schedule II, is still one of the more abused prescription opioid painkillers in the U.S. According to the National Institute on Drug Abuse (NIDA), people who misused or abused prescription narcotics had a 19 times greater chance than their peers of initiating heroin abuse. A study conducted between 2008 and 2009 found that 86 percent of people who abused heroin started narcotics abuse with prescription painkillers.

Although it is important for people who have moderate or severe pain to have access to hydrocodone with a prescription and oversight from their physician, even those who take it as prescribed may develop a physical dependence on the medication. When working with a physician, however, you can taper off the drug until your body no longer needs it to feel normal. If you struggle with hydrocodone abuse, you may try to quit on your own instead, which can lead to uncomfortable withdrawal symptoms.