Is DXM Really Safe To Use Recreationally

DXM is an opioid, though it doesn’t act on the body’s opioid receptors. Even though it is considered mild in medicinal doses, it can be seriously dangerous if abused.

It can be addictive, cause liver issues, and even depress or stop breathing altogether.

A person is abusing DXM the moment they stop following the dosages recommended on the bottle or by their doctor. The average person is not medically trained and cannot make an informed enough decision to break these recommendations safely. Always consult a doctor before taking doses that exceed recommendations.

This is admittedly only part of the picture. Most people who take DXM improperly are not intentionally abusing the drug. They just have a cough or some other symptom they think DXM will treat better in higher doses. While this behavior is dangerous, it is not likely to be chronic.

The threshold for recreational abuse, which is to say abuse to get high, starts at around 100 mg. This is not a hard line. Different people will be affected differently. Do not think that going above a recommended dose but staying below 100 mg is safe or advisable.

People who recreationally abuse DXM may use the drug at doses of 500 mg or more. Anything even remotely approaching this amount is almost certainly a sign of willful abuse.

DXM has legitimate uses, and for users who follow its recommended dosages, it will generally be safe.

As multiple sources will emphasize, always follow the instructions on the bottle or a doctor’s instructions. If you have any medical conditions or are on any diets, consult a doctor before using DXM.

DXM is present in many cough and cold medicines. Its only currently accepted use is as a cough suppressant. It should not be used otherwise unless you have first consulted a doctor and been told to take it for a different reason.

The Mayo Clinic points out that the dosage of DXM in medication is incredibly important. Potency matters and different medicines have different amounts of DXM. It is almost always mixed with other compounds for flavor, additional effects, or another reason.

Always pay attention to what is in cough medication. DXM is not necessarily the only drug at risk for abuse or negative interactions.

Adhere closely to dosing recommendations. Generally, between 15 to 30 mg (milligrams) is safe for adults, with recommended child dosing varying.

Do not give DXM to children under 4 years old. Although rare, it can be fatal to kids this young in large doses.

Dextromethorphan (DXM) is a common cough syrup that, in doses of 15 to 30 mg (milligrams), can be used to suppress coughing.

It is chemically related to codeine, an opioid painkiller, but without pain relief or addictive properties. The U.S. Drug Enforcement Administration (DEA), which accepts that DXM has legitimate uses, does not currently list it as a scheduled substance, but it does note that it is a future possibility to be scheduled. DXM’s over-the-counter (OTC) nature should not make one underestimate the fact that it can be abused.

Despite not being on the same level of addiction potential as codeine, the National Institute on Drug Abuse (NIDA) does accept that DXM is still addictive if abused.

The reason some people abuse DXM is to get high. The process is often called “robotripping” or “skittling.”

In high doses, DXM can cause a sense of euphoria as well as hallucinations and a feeling of distance from reality.

DXM is also poorly regulated. While some stores will not sell it in vast quantities to an individual — both due to its abuse potential and because it can be used in the manufacture of other drugs — it is still readily obtainable at low cost in easily abused quantities.

With the ability to get a user high, its ease of availability, its legal status, and its inaccurate reputation as a “safe” recreational drug, DXM is prone to serious abuse. Regardless of what some might think, it is addictive when abused.

The reality of why people abuse drugs are quite complex. Some people crave a new experience or wish to rebel. Others might want to escape their reality or certain emotions they are feeling. Whatever the reason, drug abuse is serious, and it can do long-lasting damage if one is not careful.

Used recreationally, DXM brings several dangers, both in the long term and the short term. This is in addition to the fact that it is psychologically addictive.

In the short term, DXM may cause the following adverse effects:

Long-term abuse is more poorly studied, although it is associated with liver damage and breathing problems. Do not make the assumption, however, that it is poorly studied means there is any reason to believe long-term DXM abuse does not have negative consequences.

Consistently pushing the heart and affecting the brain with drugs can wear on both organs and their associated systems.

Additionally, NIDA points out that by the nature of how DXM is usually abused, people are consistently exposing themselves to vast quantities of other drugs that may be present in cough medication.

Any sign of DXM abuse is cause for concern, especially if the abuse was accidental. If you are concerned someone might be in danger from DXM use, call 911 immediately.

DXM abuse is generally not lethal but “generally” is not the same as “never.”

Be especially aware of signs of DXM abuse (accidental or otherwise) in young children. They are especially vulnerable to the dangers associated with abuse. Call 911 if you suspect they may have ingested a large amount of DXM.

A serious cause for concerns include if the person who has abused DXM: 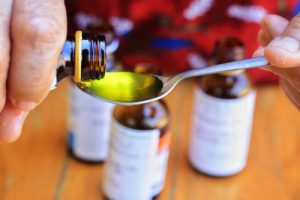 In the event of any of these symptoms, call 911 immediately. Accurately report your location and the person’s status as soon as possible.

Most regions have laws in place to protect you and the person being helped from legal repercussions, to encourage people to seek help for drug overdoses.

If a person seems to have stopped breathing or is breathing extremely shallowly, quickly check their pulse.

If they have stopped breathing but their heart is beating, begin emergency breathing. If their heart has stopped, whether they are breathing or not, begin CPR.

If you have a problem with drug abuse or have in the past, avoid DXM whenever possible. If you feel a cough is especially serious, take DXM at the recommended doses only, preferably at the low end. It may even be worthwhile to accept an uncomfortable cough over risking the temptation of drug abuse.

If your doctor suggests a medication with DXM in it, discuss your concerns with them to see if the medication is really necessary and if there are any alternatives

If you feel you cannot stop abusing DXM, help is available. There are many drug treatment programs throughout the country.

There is no shame in needing help to stop your drug abuse, even if the drug being abused is legal. There is an argument to be made that the law has not caught up with DXM. Regardless, it is a serious drug in high doses.

DXM addiction is real, dangerous, and can affect your quality of life.