Cold Turkey Detox from Heroin: Dangers and What to Expect

Heroin is one of the first synthetic opiate drugs, derived from morphine. It was developed in the 19th century as an alternative to morphine because of the large number of Civil War veterans who struggled with morphine addiction after the war. The original pharmaceutical company to produce heroin was Bayer, which promoted the drug for children who had coughs and colds.

The drug binds rapidly to opioid receptors in the brain, but the high from it does not last very long. While this may have initially seemed like a benefit for this powerful narcotic painkiller, the rapid cycling of the intense high and sudden crash meant that heroin became a more serious problem for more people with addiction. Because of the sudden increase in people who struggle with heroin addiction, the drug became heavily taxed and penalized under the Harrison Narcotic Tax Act of 1914. It was then banned altogether with the Controlled Substances Act of 1970.

For a few decades, opioid abuse in the United States, particularly heroin abuse and addiction, appeared to decrease; however, in the late 1990s, pharmaceutical companies developed new opioid painkillers, and prescribing practices for these drugs began to change. Doctors prescribed opioids like oxycodone, hydrocodone, and codeine in larger quantities, which has been correlated to an epidemic of opioid abuse and addiction in the U.S. This has led to a new rise in heroin addiction throughout the country.

If you struggle with heroin addiction, you have likely thought several times of quitting. You may have even tried a few times without success. Because heroin is so potent and fast-acting on the brain, it can quickly lead to compulsive behaviors associated with addiction and physical dependence on the presence of the drug to feel normal. This may mean that you want to take more and more, especially if you try to quit for a few days or even hours.

Without the medical supervision to safely detox from heroin abuse, going through the process of withdrawal from this substance is very difficult, and it can even be life-threatening. If you do want to quit cold turkey,  or entirely on your own without tapering, it is possible to do this, but it is very risky.

Why Is Heroin Withdrawal So Dangerous?

Heroin binds to opioid receptors in the brain within 7 seconds or 8 seconds after it is injected intravenously, and within 10 minutes if smoked or snorted. This leads to a relaxed, euphoric, painless high that lasts for a few hours. People who abuse heroin may go “on the nod,” or alternate between being awake and asleep, for several hours after taking a large dose of heroin because the drug leads to such intense relaxation. Cravings begin soon after the narcotic is metabolized out of the body.

This cycle of relaxation and craving means that withdrawal symptoms — which are most often uncomfortable and rarely, but occasionally, life-threatening — can lead to relapse if you do not have help going through a medically approved detox process.

Withdrawal Is Uncomfortable and Risky

The first stage of opioid withdrawal may feel like you have a cold or the flu, and it typically starts within 12 hours after the last dose of heroin. The second stage becomes more intense. It includes symptoms like:

Dehydration can lead to increased symptoms, especially muscle cramping and general discomfort. It may be challenging to drink enough water or eat healthy food during this time. After three-to-seven days, the heroin withdrawal process typically begins to wane; however, the psychological symptoms of cravings and anxiety may linger for months. Without appropriate psychological and behavioral treatment, cravings for the drug may linger for years and be tough to manage.

The safest, scientifically proven way to manage heroin withdrawal is to enter an evidence-based detox program.

There, you will have medical supervision to understand how serious your withdrawal symptoms may be, and professionals will develop a tapering plan using medication-assisted treatment (MAT) with either buprenorphine or morphine, depending on what works best for your body.

This is crucial if you have struggled with heroin addiction for many years, in large doses, or both. You will need to taper slowly off opioids to keep yourself safe, and you will need access to social support from addiction specialists, as well as your family and friends, to overcome heroin addiction.

It is important to know the risks of detoxing from heroin addiction without medical supervision. If you do not get MAT and doctors’ oversight, you may experience cravings so intense that you relapse back into substance abuse, which could cause you to overdose. In some instances, symptoms associated with withdrawal can lead to death.

Relapse is the most serious problem associated with quitting heroin cold turkey. Your body becomes less tolerant to the presence of narcotics when you attempt to detox, so if you return to use due to the discomfort of withdrawal, you can suffer an overdose. Many people who relapse and begin abusing a potent drug like heroin again are likely to go back to the dose they abused originally, or they may abuse more than they regularly took before. This can cause an overdose, which may be deadly.

The most common cause of death associated with opioid overdose, including heroin overdoses, is stopped breathing. Oxygen deprivation will quickly lead to shutting down the major organ systems in the body, with the brain shutting down last.

If someone near you appears to be suffering from an opioid overdose, call 911 immediately. They need emergency medical attention to treat the symptoms, including suppressed breathing and slowed heart rate.

While overdose is the biggest risk of relapsing, especially while trying to quit cold turkey, other associated risks could be fatal if you go this route.

Other Risks of Death

Aside from depressing breathing associated with opioid overdose, you risk suffering death from extreme dehydration if you try to quit heroin cold turkey.

Vomiting and diarrhea during the second, more intense, phase of heroin withdrawal can lead to hypernatremia or elevated blood sodium levels. The primary problem with elevated electrolytes like sodium is caused by brain shrinkage, leading to dangerous symptoms.

Brain damage, coma, and death can all result from dehydration, especially if it occurs suddenly.

If You Must Detox at Home, Get Help From Loved Ones

These drugs bind to opioid receptors in the brain for a day or two, allowing cravings and withdrawal symptoms to be managed. Then, a doctor can create a tapering program to slowly reduce the dose of the MAT drug until your body eventually no longer relies on the presence of narcotics to feel normal.

In rare cases, you may be able to quit cold turkey. If that is the case, you will benefit from following these steps:

Social support is crucial during this time. 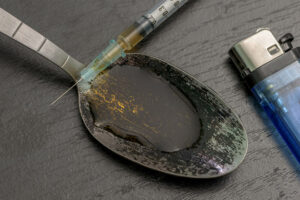 If you try to do this alone, you are more likely to compulsively abuse heroin or another drug, or suffer from problems associated with heroin’s withdrawal symptoms.

If you do not have social support in place, detox programs offer social workers, nurses, doctors, and therapists who can offer you physical and emotional support during the withdrawal process.

If you have not abused heroin in large doses or for a long time, you may be able to detox safely, at home, with a strong support system of people who will make sure you are taken care of, not abusing more opioids or other drugs, and not suffering from life-threatening symptoms that require hospitalization.

You must have medical supervision during this process, however, and a doctor’s approval to proceed with the detox process at home.

Overall, medical detox is recommended for heroin withdrawal. Cold-turkey detox is not advised.