The Symptoms of Wet Brain – What Are They?

Wet brain, formally known as Wernicke-Korsakoff syndrome, is a type of brain damage that can occur after extended and repeated exposure to heavy drinking. The excessive consumption of alcohol can cause a deficiency of thiamine, or vitamin B1, which is an essential vitamin for the proper functioning of the brain and body. Alcoholism interferes with the consumption, absorption, and activation of thiamine in your system. The wernicke-Korsakoff syndrome is actually the occurrence of two syndromes. Wernicke encephalopathy and Korsakoff syndrome are two separate conditions though they commonly occur together because they are both caused by a thiamine deficiency. Wernicke encephalopathy usually occurs first and causes damage to the thalamus and hypothalamus, which are in the lower part of the brain.

Korsakoff psychosis typically develops as the symptoms of Wernicke encephalopathy diminish. It causes permanent brain damage to areas of the brain associated with memory.

According to the National Organization for Rare Disorders (NORD), Wernicke-Korsakoff syndrome occurs in about 1 to 2 percent of the general population in the United States. The condition occurs slightly more in males than it does in females, and it occurs evenly across the population of people aged 30 to 70.

How Does Wet Brain Occur?

Alcoholism is the most common cause of wet brain, though it is not the only one. A thiamine deficiency is not only caused by excessive drinking. Nonetheless, alcoholism is typically the cause of the wet brain because alcohol interferes with the absorption of thiamine as well as the enzyme that activates thiamine in the body.

Additionally, people suffering from alcoholism are less likely to consume well-rounded, healthy diets, which is how you get enough vitamin B1 into your system. It is an essential vitamin that is not produced naturally by your body, so it must be consumed from outside sources.

Again, a wet brain occurs following a severe deficiency of vitamin B1 in your system. Lesions form on the brain that causes a variety of difficult symptoms. These symptoms develop over a few days or weeks, and they get progressively worse.

Some researchers believe that Wernicke encephalopathy and Korsakoff syndrome are two separate disorders that share the same cause and are simply related to one another. Other researchers, however, believe the two conditions are actually different stages of the same syndrome. In this case, Wernicke syndrome is the initial, acute, shorter phase with more serious symptoms. Korsakoff syndrome then indicates a chronic and long-lasting disorder.

The primary symptoms of the wet brain can be broken down into two categories since it is really the occurrence of two separate syndromes. Symptoms will vary depending on which syndrome is experienced first or most predominantly.

According to the U.S. National Library of Medicine’s Medline Plus, the symptoms of Wernicke encephalopathy include:

Common symptoms of Korsakoff syndrome include:

Because the two syndromes often occur together, the above symptoms can overlap and do not necessarily occur on a specific timeline. It is more common to experience the symptoms of Wernicke encephalopathy first, though it is not a rule that they have to appear that way.

How To Diagnose Wet Brain

If someone has a history of alcoholism, however, it can be easier to reach a proper diagnosis since the wet brain is most commonly associated with people who struggle with alcohol use. In addition to evaluating your history of alcohol use, doctors are wise to run tests that check for any nutritional deficiencies, such as that of vitamin B1. Psychological screenings can also be helpful to determine the presence of any mental symptoms, such as confusion, confabulation, and hallucinations.

What To Do After Recognizing the Presence of Wet Brain

Once you have recognized the symptoms of the wet brain in yourself or someone close to you, it is important to get treatment as soon as possible. Without treatment, a wet brain can cause life-threatening brain damage. With treatment, however, symptoms can be controlled, and the syndrome can likely be stopped.

As soon as you recognize symptoms, you need to get medical attention right away.

Wet brain is a progressive syndrome, so the sooner you can get medical help, the more likely you are to prevent further brain damage. There are two main interventions for the wet brain.

Vitamin B1 should be given as soon as possible to patients presenting with symptoms of the wet brain. A Vitamin B1 injection will help to address symptoms of confusion, delirium, vision problems, and trouble with muscle coordination.

In addition to receiving a vitamin B1 injection and stopping your consumption of alcohol, it is important to focus on eating a well-balanced diet. A healthy diet that includes vitamin B1 will reduce your chances of the wet brain occurring again in the future.

Can You Reverse the Effects of Wet Brain?

The symptoms of Wernicke encephalopathy are for the most part treatable through injections of vitamin B1. 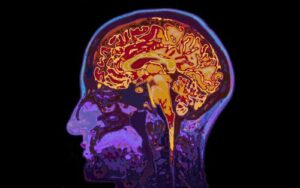 Vitamin B1 that is administered intravenously can provide quick treatment that may be able to reverse some of the neurological symptoms, such as vision problems and muscle coordination issues.

Korsakoff syndrome, however, can cause permanent brain damage that is irreversible.

The best ways to protect yourself against the irreversible effects of wet brain are to monitor your alcohol use and ensure you are getting a sufficient amount of vitamin B1 in your diet on a daily basis.

The key to treating wet brain is to receive treatment as soon as possible.

The sooner you can recognize symptoms and receive appropriate treatment, the sooner you can stop the progression of the syndrome and greatly lower your chances of experiencing irreversible side effects.