In the United States, between 40 and 50 million adults aged 18 and older are affected by an anxiety or sleep disorder. Anxiety disorders, in particular, can be especially debilitating.

Clinical anxiety is more than just simply feeling nervous before a test or big meeting, or feeling shy about speaking in front of a crowd. Someone with an anxiety disorder can become suddenly overwhelmed with feelings of nausea, panic, and fear, experiencing heart palpitations and hyperventilation. When faced with these intensely unpleasant symptoms, many people will seek out medications to curb the effects of anxiety and keep it from taking over their lives.

Benzodiazepines are the medication of choice for treating mental health disorders like anxiety and can be taken as needed as part of someone’s regular life.

Because alcohol is so widely used in social settings and so many people use benzodiazepines to treat their anxiety, there are many opportunities for people to use both benzodiazepines and alcohol at the same time.

Since both are substances that depress the central nervous system, mixing benzodiazepines and alcohol may seem like a way to strengthen the anti-anxiety effects of both, it can cause serious health problems and increase the risk of a potentially fatal overdose.

Benzodiazepines, also known as benzos, are psychoactive drugs that are typically used to treat symptoms of anxiety disorders as well as insomnia and epilepsy. Like alcohol, benzodiazepines are central nervous system depressants used to create feelings of sedation and calm when taken.

Also like alcohol, benzodiazepines accomplish this by mimicking a neurotransmitter in the brain called gamma-aminobutyric acid (GABA). GABA is a brain chemical that is responsible for keeping you calm by blocking nerve impulses transmitting feelings of stress, anxiety, or fear from reaching the brain.

Benzos like Xanax mimic natural GABA, binding to the brain’s GABA receptors to stimulate them into overproduction until they flood the brain and create a much more powerful block against stress and anxiety than the brain could ever do on its own.

Benzodiazepines are among the most widely prescribed classes of medication in the United States and include name-brands such as Xanax, Klonopin, Ativan, and Valium. There are nearly 50 million prescriptions written just for Xanax alone every year.

Benzos were introduced largely as a replacement for barbiturates, which were the previous drug of choice for treating insomnia and anxiety until they were determined to be more harmful than useful, due to a long list of extremely negative side effects and a high potential for addiction.

Unfortunately, benzodiazepines are not without their own problems. They are generally recommended only for short-term use, as it is possible to build up both tolerance to their effects as well as a dependence on them in as little as two weeks.

There is also the danger of a paradoxical reaction, which means that they work in the opposite way than intended, causing feelings of anxiety, panic, or depression in some users.

But the danger of adverse effects from the use of benzodiazepines like Xanax skyrockets when they are used in conjunction with alcohol. Mixing alcohol with Xanax, or any other benzodiazepine can trigger potentially fatal health effects, including the risk of overdose.

Why Do People Mix Benzodiazepines and Alcohol?

Despite the very real risks involved in combining benzodiazepines and alcohol, it happens quite often. This is, in part, because many people are simply unaware of the dangers of doing so.

Because benzodiazepines are doctor-prescribed, people will misuse them under the false impression that it is safe to do so, especially in comparison to illicit drugs. So they might not think anything of taking a Valium or Xanax for social anxiety at a party while having some drinks.

In fact, some people are unaware they are mixing the two and do it accidentally, not realizing how long it can take to feel the effects of benzo, which can sometimes be anywhere from thirty minutes to an hour as well as how long it stays in their system and will start drinking before it has even taken effect.

However, as previously stated, some people will mix benzo like Xanax and alcohol for the specific purpose of enhancing the euphoric, relaxing effects of both substances, as they both perform similar actions on the central nervous system.

In fact, many people who have been abusing alcohol to the point where they have become tolerant to its effects will mix alcohol and benzodiazepines to overcome that tolerance and get the same buzz they used to when they first started abusing alcohol.

This works the other way as well, with people dependent on benzodiazepines adding alcohol to the mix to counteract their resistance to the effects of benzos.

Unfortunately, while mixing benzodiazepines and alcohol does significantly strengthen the effects of both, it also strengthens their side effects, and increases the toxic effects of abusing either substance, which is how fatal overdoses can occur.

What Are the Effects of Mixing Benzodiazepines and Alcohol?

Since both benzodiazepines and alcohol are central nervous system depressants, they amplify the other’s depressive effects, meaning that someone will experience more intense feelings of the following:

Apart from the compounded depressive effects, mixing benzodiazepines and alcohol can also lead to alcohol poisoning due to overdrinking, abnormal or irregular heartbeat, and damage to the liver.

Mixing benzodiazepines and alcohol also increases the already high risk of engaging in dangerous behavior that comes with alcohol intoxication on its own. Driving while having taken benzodiazepines is already not recommended, as drowsiness is a common side effect, but combined with alcohol, a car accident becomes almost guaranteed.

If someone engages in mixing benzodiazepines and alcohol over an extended period of time, they are at a very high risk of experiencing even more negative health effects, including:

People who mix benzodiazepines and alcohol over long periods of time have also been observed as engaging in antisocial behavior, including an increase in hostility, irritability, and even outright aggression.

Can Mixing Benzodiazepines and Alcohol Kill You?

The short answer, as should hopefully be obvious by now, is yes. Benzodiazepines and alcohol pose enough danger when abused on their own, let alone when mixed. 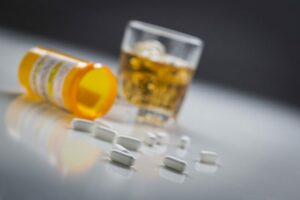 Using benzo like Xanax and alcohol together can cause permanent damage to a person’s brain functions, including their memory and the ability to control their emotions, as well as serious organ damage.

There is also the risk of an overdose, which is highly likely to occur when using two different depressant substances together.

In the event of an overdose, the user will experience intense drowsiness, extremely impaired movement, and dangerously slow and shallow breathing to the point where they are extremely susceptible to slipping into a coma, followed by death from organ failure due to a lack of oxygen.

Benzodiazepines can be extremely useful in treating the symptoms of anxiety, but just because they are a prescribed medications does not mean that they are safe to abuse, especially in combination with alcohol.

It is all too easy to overdose and, even if you do not die, suffer permanent damage to your brain and major organs.

Get on the Road To Recovery Today

If you or someone you care about is struggling with an addiction to drugs or alcohol, don’t wait until it’s too late! Quitting is never easy, but Delphi Behavioral Health Group can make it easier by helping you get connected to the support and resources you need to get sober and take back your life.

Our admissions specialists are standing by 24/7 to help you find the facility and treatment program that will work best for you or your loved one, as well as verify insurance, explore payment options, and answer questions or concerns you might have.