There are many Americans who turn to alcohol to help with sleep problems. This begs the question, is it effective?

Alcohol seems to be an effective way to induce sleepiness, but it results in poorer sleep quality. Over time, using alcohol as a sleep aid ultimately leads to sleep disruption, and it may even cause insomnia.

Alcohol’s Effect on the Sleep Cycle

While it may seem tempting, and even effective to reach for a bottle of alcohol to help you get to sleep, a recent article published by Medical News Today, found that alcohol can ultimately be disruptive to sleep patterns.

An estimated 20 percent of Americans adult is using alcohol to help them fall asleep. This is an issue because, eventually, alcohol can disturb the body’s natural sleep cycles so much that it can actually cause insomnia.

The reason alcohol helps people fall asleep in the short term, according to the study covered in the article above, is that it alters the circadian rhythm. A circadian rhythm is the 24-hour body rhythm clock that regulates biological processes in humans, plants, animals, fungi, and cyanobacteria.

The study discovered that alcohol promotes sleep by altering an individual’s “sleep homeostasis,” which is the brain’s built-in mechanism that regulates sleepiness and wakefulness. It is this process that balances how much an individual needs to sleep by factoring in how long they have been awake. This balance is handled in the body with the aid of a naturally occurring chemical called adenosine.

Adenosine levels increase the longer a person is awake. The amount of the chemical will go down again after a sleep session.

In essence, when adenosine levels get high enough, they induce sleepiness.

The science behind the relationship between alcohol and sleep was examined by a study conducted by the University of Missouri School of Medicine. This study looked at how alcohol affects sleep over a five-year period. It found that even a single night of binge drinking can start to alter how the gene that regulates sleep operates.

This particular study was conducted on mice, and it found that binge drinking can lead to sleep deprivation. Mahesh Thakkar is a professor and director of research at the university that conducted this study. He found that drinking to induce sleep is a dangerous cycle. A binge drinker will feel sleep-deprived on the second day and require even more alcohol to reach a sleepy state.

The experiment Thakkar conducted found that mice exposed to binge drinking experienced a spike in non-REM, or non-rapid eye movement sleep, for four hours after the binge. During the subsequent wakeful period, the mice experienced increased wakefulness and overall reduced sleep during the following sleep periods.

Another interesting finding was that the post-binge mice did not see an increase in adenosine, the sleep-promoting chemical mentioned earlier. Not only that, the sleep deprivation experienced after the binge did nothing to increase sleep homeostasis. 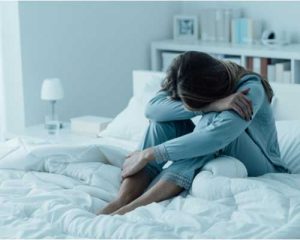 It was found that after a single session of binge drinking, the gene associated with regulating sleep homeostasis was altered. The study did not expect this. It was expected that the gene would not experience altering for several sessions. Instead, as little as four drinks can alter the gene.

According to an article published by Psychology Today, alcohol is one of the most commonly used sleep aids. About 20 percent of the adult population uses alcohol to help them fall asleep.

This is not so surprising considering the general attitude and societal stance on alcohol in America. The irony here is that habitual drinking, even at a moderate level, is more likely to disrupt your sleep than to help it.

A circadian rhythm is the master biological clock in the body, which is disrupted by alcohol consumption. This means the body’s natural clock cannot properly synchronize itself when heavy drinking occurs.

Circadian rhythms are so essential to natural biological processes that disrupting them with alcohol consumption can lead to a host of health complications, including:

Decreased liver function. An essential filtration system for the body, the liver aids in the metabolization of food and chemicals and pulls toxins from the body, including alcohol. Almost every organ in the body gets signals to function based on the circadian clock, and the liver is no exception. Disrupting the circadian rhythm of the body can cause liver toxicity and disease.

Depression. Depression, alcohol, and sleep have a complex relationship. This is because those who suffer from depression already have a disrupted circadian cycle. Alcohol can greatly exacerbate this already disrupted process, compounding both problems.

Leaky gut. The microbiome contained in the gut is often referred to as the second brain. What is less known is that this microbiome relies heavily on circadian rhythms to operate properly. A leaky gut syndrome is a phenomenon that weakens the lining of the intestinal tract, and it can be caused by a disruption in circadian rhythm that is associated with alcohol consumption. Leaky gut can cause leaks that allow food, toxins, and bacteria to leave the intestines and enter the bloodstream.

Twenty percent of the population in America uses alcohol as a sleep aid.

According to a study published in JMIR Mental Health, alcohol consumption may help you get to sleep faster, but it makes the overall quality of sleep decline. The project followed 4,098 men and women between the ages of 18 and 65. The participants’ heart rate variability, or HRV, was recorded in real-world conditions using a unique device.

Before this was done, none had previously covered the physiological effects of alcohol consumption in an uncontrolled environment. The scientists in the study had sleep HRV recordings from two nights — one where a participant used alcohol and another where they did not. HRV monitors the variation in time between heartbeats, which is regulated by the autonomic nervous system.

The study found that even slight alcohol consumption decreased the restorative quality of sleep.

Low alcohol intake was found to reduce the physiological restoration sleep allows by over nine percent. It was found that even a single drink would impair sleep quality.

Even more interesting, the study did not show great variations of the effects based on whether the subject was male, female, active, or sedentary. Across the board, each participant experienced a decrease in overall sleep quality. This suggests that even being young and active does not make you impervious to the negative effects of alcohol on sleep.

The Effects of Sleep Deprivation

The preponderance of evidence suggests that alcohol ultimately is not a good sleep aid, as it disrupts the quality of sleep. And there are many consequences of poor sleep quality.

Several health problems are tied to lack of sleep.  One of those is sleep deprivation which can cause problems for several body processes including the following:

This system is the information superhighway of the body. Chronic insomnia can start to affect how information is distributed.

Being sleep-deprived makes your brain exhausted. As a result, it can be more difficult to learn new things and concentrate on tasks. Signals to your body can also be delayed from lack of sleep, causing a decrease in coordination skills and making it more likely to get into an accident.

The immune system is responsible for protecting the body from pathogens. It also produces cytokines, infection-fighting substances. Cytokines fight foreign bacteria and viruses in the body. They also help your body to sleep and give your immune system more energy to defend the body against illness.

Sleep deprivation can affect the immune system’s ability to build up cytokine numbers, making it less able to stave off infection and disease. This can also cause a long time for you to recover from illness. Long-term sleep deprivation can increase your risks of chronic diseases, such as heart disease and diabetes.

Digestive system: Sleep deprivation is a risk factor for obesity. Sleep affects the levels of two vital hormones: leptin and ghrelin. These hormones play a role in regulating feelings of hunger and fullness. Leptin communicates to your brain that you have had enough to eat.

A study published by the National Center for Biotechnology Information found that without enough sleep, the brain starts to reduce leptin while increasing ghrelin. Ghrelin is responsible for increasing your appetite.

Fluctuations of these hormones explain why some people may snack later at night or overeat closer to bedtime. Lack of sleep can also make an individual too fatigued to exercise, contributing to weight gain.

Those who don’t sleep enough are more likely to develop cardiovascular issues. In fact, a study conducted by the European Journal of Preventive Cardiology found that there was a link between insomnia and an increased risk of heart attack and stroke.

Hormone production relies heavily on sleep. For adequate testosterone production, you need three hours of uninterrupted sleep. This is about the time in which a REM sleep episode will start. Waking up in the middle of a sleep cycle can affect hormone production.

Growth hormone production can be especially impacted by children and teenagers. These hormones are important because they help to repair cells and tissue, and build muscle mass. The pituitary gland is responsible for the regular release of the growth hormone, but good sleep and exercise encourage the release of this hormone as well.

Alcohol Is Not an Effective Sleep Aid

While at first glance, it may seem that the consumption of alcohol helps people to fall asleep, the effects are temporary and costly with diminishing returns.

“Alcohol ultimately disrupts the circadian rhythm of the body, which is responsible for keeping nearly all biological processes functioning properly, including sleep rhythms. While alcohol may help you to fall asleep initially, you will lose sleep later, and the quality of that sleep will be poor.”

Alcohol consumption, even at low levels, can have a detrimental effect on sleeping regardless of your age, gender, and fitness level. Even though 20 percent of Americans use alcohol as a sleep aid, it is not a healthy or recommended option.

There are many alternative sleep aids out there, so it is important to talk to a qualified professional to see what options are right for you.