In the midst of the opioid epidemic, one of the biggest threats to the United States is undoubtedly synthetic opioids such as fentanyl and its many analogs. But even as synthetics take center stage, other unidentified opiate-based substances are growing in popularity as they find their way into the country, creating new dangers in their wake.

Kratom may not be a new drug, in fact, it has been used in many East Asian countries for nearly a hundred years, but it is still fairly new to the U.S., and its use is currently unregulated and unmonitored. Because of this, the majority of information on the use and abuse of kratom is largely anecdotal and still under review.

What we do know is that the U.S. Centers for Disease Control and Prevention (CDC) reported an enormous spike in poison control center calls for kratom exposure in just five years, with 263 cases in 2015 as compared to just 26 cases in 2010.

Both the U.S. Drug Enforcement Administration (DEA) and U.S. Food and Drug Administration (FDA) have taken a closer look at kratom in the past few years, with the FDA voicing concerns about any potential medical use it might have.

Kratom has at least been proven to be physically addictive and very much possible to overdose on, and while it remains an unscheduled substance, as of March 2018, its use has been banned in Alabama, Arkansas, Indiana, Tennessee, Vermont, and Wisconsin.

Kratom abuse is not something to be taken lightly. Since some people underestimate its strength, kratom can be easily misused with a high potential for addiction and serious negative health consequences associated with its long-term use.

If you or a loved one has developed an addiction to kratom, take it as seriously as any addiction and seek out a professional addiction treatment and detox as soon as possible.

Kratom works by binding to the opioid receptors in the brain, which are responsible for blocking out pain signals from reaching the brain, among other things. Kratom activates these receptors, stimulating them into overproduction, which creates feelings of pain relief and euphoria that are extremely similar to opioids like morphine.

However, even though kratom is currently classified as an opioid, its exact pharmacology is still being studied, because it only produces these opioid-like effects at very high doses. At low doses, even though it mainly acts on opioid receptors, kratom produces effects that are usually associated with stimulants.

Low doses of kratom can cause feelings of increased energy, alertness, and talkativeness. Another thing that is unique about kratom is the fact that different varieties of kratom will also have stronger stimulant effects than opioid effects and vice versa.

While some people have suggested that kratom might be useful in medical maintenance therapy for opioid addiction in the same way that methadone or buprenorphine is used, kratom’s dual status as both a sedative and stimulant requires further pharmacological research.

What studies have been done by the FDA are doubtful of kratom providing any worthwhile drug treatment use.

What are Kratom Withdrawal Symptoms?

Because kratom affects the brain’s opioid receptors in a way that is extremely similar to opioids themselves, kratom withdrawal symptoms will typically also mirror that of opioids.

While kratom withdrawal is still being studied, the DEA has reported the observation of the following symptoms during kratom detox, which corresponds to the symptoms associated with opioid withdrawal.

The symptoms of kratom withdrawal include those on the mild end of the spectrum, such as:

Kratom withdrawal symptoms can also be more severe and potentially dangerous, depending on, among other things, the severity of someone’s addiction to kratom. Some of these symptoms include:

What are the Stages of the Kratom Withdrawal Timeline?

The fact that there is still so much that we still do not know about kratom and the process of detoxing from kratom makes it difficult to provide an exact withdrawal timeline since much of it is based on anecdotal evidence.

Much like its withdrawal symptoms, due to kratom’s similarity to opioids such as morphine, the kratom withdrawal timeline is typically assumed to follow the timeline associated with opioid withdrawal.

However, the kratom withdrawal timeline will still vary from person to person based on several factors unique to a given individual, including:

Keeping those facts in mind, the kratom withdrawal timeline should be at least roughly as follows:

Generally, kratom withdrawal symptoms will have begun to manifest within about 12 hours of the last use, although they can begin appearing as early as eight. Early symptoms include depression, anxiety, nausea, and other flu-like symptoms.

One to Three Days

The kratom withdrawal symptoms will most likely now also include cravings, anxiety, intense mood swings, migraines, and more. Over the course of the next few days, these symptoms will reach their peak, making this the phase where someone is usually most vulnerable to relapse.

Once past the three-day mark, symptoms should begin to ease and fade away, first the physical ones, followed by the psychological symptoms, which can take about four or five days. After about a week, the majority of the symptoms should be completely gone, although cravings and feelings of depression can linger past this point.

Kratom is the common name for a tropical tree known as Mitragyna speciosa that is in the coffee family. Kratom is native to East Asian countries like Indonesia, Malaysia, Thailand, and Myanmar, and has been used in these countries for decades as an opioid substitute, helping to boost energy and manage pain.

Historically, farmers and laborers would chew kratom leaves to experience its effects, but today kratom can be ingested in many other forms, including being brewed as a tea as well as:

What is the Next Treatment Step?

After completing kratom detox and people are through the withdrawal period, the next phase of kratom addiction treatment is checking into an addiction recovery treatment program. If detox is not followed up with aftercare treatment of some kind, it is not going to be effective.

Detox flushes the kratom from someone’s system and stops the physical and psychological damage it was causing, but it does nothing to address the behaviors and issues that led to someone becoming addicted to kratom in the first place. If those underlying causes are not dealt with, then all detox has done is put a bandage on the problem that relapse will inevitably tear off.

Addiction recovery treatment, on the other hand, will provide the knowledge, skills, and resources needed for someone to fully understand issues at the root of their addiction and therefore be better equipped to manage it and remain sober. 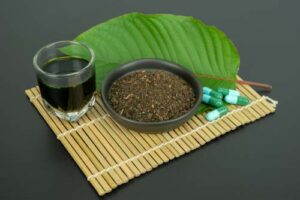 Depending on the severity of someone’s addiction, treatment can be conducted on a residential or outpatient basis. If someone has only been using kratom for a short while, then outpatient treatment at a clinic may be enough support.

However, others may need the more intensive level of care than inpatient treatment can provide, removing them from their environment to fully focus on their recovery.

Treatment length will also vary according to an individual’s needs, but the typical recommendation for effective results is a minimum of 90 days. Some people may even need upwards of a year to ensure that they have made a full recovery and are prepared to return to their regular life.

Everyone’s addiction recovery treatment plan is going to be a little different because it will have been customized based on what will be most effective for a given individual. This is usually determined through an evaluation by a therapist or counselor and will typically include a mix of at least some of the following treatment elements: