How Much Does Substance Abuse Increase the Spread of HIV?

Human Immunodeficiency Virus (HIV) isn’t as widespread as it used to be, but it’s still of concern for many people.  HIV attacks the body’s immune system, and it’s spread through body fluids, primarily blood and semen.

This virus targets T-cells, which help fight off infections. When an individual loses T-cells, their immune system weakens, and the use of drugs and alcohol has been linked to this disease since the epidemic began in the 1970s.

In addition, people suffering from substance use are more likely to trade unsafe sex for drugs or money. Of course, without the presence of substance abuse, there are far fewer reasons to share needles, which is another major way to transfer HIV.

How To Know if You Have HIV

Most people don’t realize they have HIV right away. In fact, HIV symptoms can take up to ten years to surface. Oftentimes, people mistake these symptoms for the common flu. Here are some symptoms to look out for:

The sooner a person can seek medical help, the better. The prolongation of HIV symptoms can lead to acquired immunodeficiency syndrome (AIDS), which can be fatal.

In today’s world, there have been fewer cases of HIV and AIDs because of education, medications, and other advancements. Some of these medications are called antiretrovirals (ARVs). 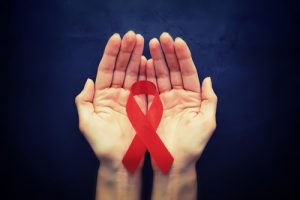 This treatment helps prevent the virus from spreading through the body.

The use of drugs and alcohol can damage the positive effects of HIV medications.

In fact, substance abuse can cause the virus to more quickly spread throughout the body, especially if it’s untreated.

Many times, doctors have difficulty diagnosing patients because they’re unable to determine which condition is causing their symptoms.

Although there’s no cure for HIV, steps can be taken to help treat the symptoms. Therefore, it’s important to consult a doctor if symptoms emerge.

It can also be helpful to find a therapist after you’re diagnosed with HIV, to help sort out your feelings about the future. Many people with HIV also find comfort in support groups and treatment programs, as they allow people to come together who are facing the same struggles.

If you’re struggling with substance abuse, professional treatment is available—whether or not you have HIV.

You simply have to reach out for help and get on the path of recovery.

Treatment options include both inpatient and outpatient treatment centers.

Oftentimes, these centers involve a combination of these modalities, which result in the most successful outcomes in the long term.

While substance abuse may have a part to play in spreading HIV, it doesn’t have to.

By deciding to address substance abuse and seek medical help for HIV/AIDS, individuals can help decrease or prevent the spread of HIV.