Doctors and Addiction: How to Find Help as a Medical Professional

It’s not uncommon to view doctors and healthcare workers as heroes – they are considered miracle workers and invulnerable, but one doctor doing an op-ed in the LA Times admits, “we are no better than the rest of you, and in some ways, we’re far worse.”

The problems show up in a long list of troubling statistics, and unfortunately, doctors are more prone to alcohol and drug addiction. The general population sees addiction rates of eight to ten percent, while physicians see rates at 10 to 15 percent. While physician distress is accounted for, another factor is plentiful access.

Much has been written about depression, anxiety, and physician burnout. Doctors kill themselves at twice the general population’s rate, and as many as one-sixth of primary doctors will leave their practice mid-career. Practicing medicine has never been an easy path, and today, doctors are working faster and longer, with smaller rewards. Many physicians admit if they could start over, they wouldn’t be doctors.

A study released in the Journal of Addiction Medicine found that 69 percent of doctors abused prescription medicine to relieve physical or emotional pain and stress. Unfortunately, the medication succeeds in reducing their ailment, but the temptation becomes overwhelming to use them again and again. Given how addictive these drugs are, it’s like trying to put out a fire with gasoline.

Unfortunately, their access to prescription medications like oxycodone or fentanyl is unlimited. Drug companies routinely send doctors free samples, and patients bring their unused medicine to be disposed of. Colleagues will also write prescriptions as a professional courtesy, and some doctors might use their prescription pad, despite it being illegal.

For doctors, getting help is much more of a challenge than the general population. With the stigma attached to drug use, doctors fear losing their license or being prosecuted, which leads them to hide in their addiction. How do you find help as a medical professional? Let’s take a look down below at the steps you can take if you’re a doctor trapped in addiction.

Doctors and Addiction: They Must Be Met With Compassion

When doctors fall deeper into their addiction, they rarely seek help. Despite being made up of compassionate doctors, medical boards treat addiction more like a crime than a disease when it’s one of their own. Doctors and addiction is a frightening topic that must be met with compassion. A troubled doctor will stay in the shadows until the worst-case scenario occurs – maybe it’s a DUI, or perhaps they show up under the influence to the operating room, or they get charged with a serious crime. It’s time to remove the stigma so they can get help.

If you’re concerned about a colleague or loved one, it’s essential to recognize the signs of doctors and addiction and how to find help as a medical professional.

Doctors and Addiction: What Are the Signs?

Although addiction comes with a specific set of signs, determining if a doctor has become dependent on or addicted to drugs or alcohol is a challenge because they’re considered highly functional users. It means they can maintain their home life, career, and substance use for extended periods without anyone noticing.

So what are the common signs of drug or alcohol addiction in doctors? Some of them include: 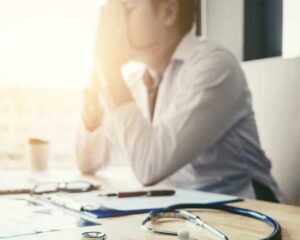 The Effects of Addiction in the Workplace

Doctors hold higher levels of responsibility than the general population, and the risk of an accident can have catastrophic or life-threatening effects. Addicted medical professionals are more likely than non-addicted colleagues to cause an accident or neglect a person’s health. It may be due to distraction on the job, leaving a surgical procedure to use drugs, or impairment limiting their ability to perform the task at hand.

Addiction to drugs or alcohol makes people selfish without them knowing. Doctors aren’t only putting their health at risk, but they also put others at risk of harm. Medical professionals may not accept they have an addiction, but sooner or later, they’ll have to face the problem head-on and get the help they need. By doing so, it’ll prevent accidents on the job and the possibility of neglecting their patients.

How To Find Help as a Medical Professional

Doctors are highly regarded for their line of work, as they should be because they save lives and put others ahead of themselves. With that said, they are not immune to addiction. Addiction is a disease that affects those from all walks of life, all socioeconomic backgrounds, and does not discriminate based on zip code or career. Fortunately, with the advances in modern science and addiction studies, treatment programs exist for medical professionals and offer them a fresh start.

Various states offer programs that cater to doctors while recovering from addiction while ensuring they won’t lose their practice or license. This is important for medical professionals who struggle because it exists as the primary barrier between addiction and treatment. The programs are designed to help doctors through recovery and provide tools to avoid triggers once they are back in the workplace.

The most crucial areas that addiction treatment for doctors will address include:

Medical professionals have a reason to be optimistic before, during, and after recovery. Despite their higher numbers of addiction in the general population, they also hold a higher than average rate of maintaining sobriety once they complete treatment.

The high rates of success stem from treatment programs where staff members are familiar with treating medical professionals and the challenges that come from addiction. The staff will work alongside you to find the root of what caused your addiction. With time, you will restore your health and get back to a normal life. If you’re a medical professional struggling with addiction, it’s time to stop hiding and get the help you need. You know better than anyone the damage this disease can cause, and you have the power to control it today.