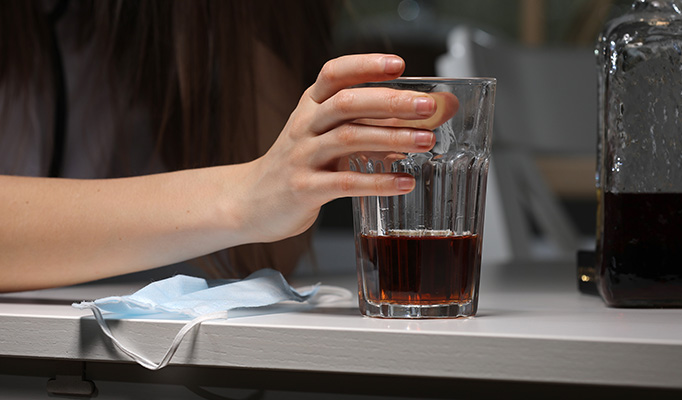 The coronavirus pandemic has left no part of life untouched. The world has not been the same since it became a significant health threat, and it’s more apparent by the day that it will not return to its pre-COVID-19 existence.

As virus cases continue to grow and life becomes increasingly unpredictable, people are coping with the changes in their own way, and for some, that means ramping up on alcohol.

For many people, pandemic-related changes have freed up time in their daily schedules that once included a commute to work or getting the kids ready for school. Some are using this extra time to drink, even while working on the clock at home, according to a recent Alcohol.org survey. According to the results of the survey of 3,000 U.S. workers:

More time at home and away from others can be stressful, which increases feelings of boredom and loneliness. To deal with this stress, people may go on a search for wine, beer, or a cocktail to ease their anxiety and give them “something to do.” But another alarming trend has also emerged during this pandemic. Some people are bingeing on alcohol, a practice that is not only dangerous but can be the beginning of a debilitating and deadly alcohol addiction.

Alcohol sales are up, according to Nielsen figures from March 2020. As highlighted by Forbes, Nielsen’s data shows that in general, people are buying more alcohol than they were around this time last year, and they’re buying it in larger quantities. Forbes writes, “Total U.S. beverage alcohol retail sales in the week ending March 14, 2020, over the same period in 2019, was: wine up 27.6%, spirits up 26.4% and beer/flavored malt beverages/cider up 14%.” Some drinkers are stockpiling their alcohol for self-isolation, as one-fifth of respondents to Alcohol.org’s survey confirmed.

What Is Binge Drinking and Who’s Doing It?

Binge drinking is heavy alcohol use that takes place in a short period, bringing the drinker’s blood-alcohol concentration (BAC) to 0.08 grams or more. Men who consume five or more drinks per occasion, and women who consume four or more drinks per occasion are binge drinking. An “occasion” is usually two hours, but an alcohol binge can occur over several hours or last up to several days.

“Binge drinking is the most common, costly, and deadly pattern of excessive alcohol use in the United States,” writes the U.S. Centers for Disease Control and Prevention (CDC). The federal agency also says most people who engage in binge drinking are not dependent on alcohol. Also important to note is that not everyone who binge drinks will become addicted to alcohol. Several factors determine if someone develops a substance addiction.

According to data cited by the CDC, binge drinking is most common among younger adults between the ages of 18 and 34, but more than half of the total binge drinks consumed are by people who are age 35 and older. Also, one in six U.S. adults binge drinks about four times a month and is estimated to consume about seven alcoholic drinks per binge.

Why Binge Drinking Is Problematic

People who binge on alcohol enjoy the immediate effects of doing so, as they provide an escape from everyday challenges or make them feel like they can take these challenges on or ignore them altogether. However, excessive drinking is not without its consequences. Drinkers seldom think about how consuming large amounts of alcohol can affect their health and safety, but perhaps they should.

As Healthline notes, excessive alcohol use has short- and long-term effects on the body. Alcohol use affects not just the brain but other organs, too.

“When it comes to inflammation of the pancreas, stomach, or liver, those effects can be acute. A very heavy single drinking episode, or several of those in a short space of time, can cause acute inflammation and irritation of those organs,” Dr. Timothy Naimi, professor of medicine at Boston University School of Medicine, told the publication.

When people drink, they usually start to feel the effects of alcohol within the first five to 10 minutes of doing so. Once the alcohol is in the body, it is quickly absorbed into the bloodstream through the mouth, stomach, and small intestines. It stays in the stomach longer if food is in there, but it will move on to the small intestines if the stomach is empty.

Most of the alcohol gets broken down by the liver, about 90 percent, while the rest is excreted through the lungs, kidneys, and sweat. However, the liver can only process so much alcohol at a time.

“For an average-sized person, the liver can only break down about one standard drink per hour. If you drink more alcohol than what your liver can process, your blood-alcohol content (BAC) will increase. So will the effects on your body,” Healthline says.

What’s considered a standard drink depends on what someone is drinking and how much alcohol content is in it. The National Institute on Alcohol Abuse and Alcoholism (NIAAA) offers guidance on how to determine what a standard drink is, noting that people are usually surprised to learn what counts as a drink.

“The amount of liquid in your glass, can, or bottle does not necessarily match up to how much alcohol is actually in your drink,” it writes. “Different types of beer, wine, or malt liquor can have very different amounts of alcohol content. For example, many light beers have almost as much alcohol as regular beer – about 85% as much.”

It advises that in the U.S., “a standard drink is any drink that contains about 0.6 fluid ounces or 14 grams of pure alcohol (also known as an alcoholic drink-equivalent).”

The Mayo Clinic defines one drink as:

“Mixed drinks may contain more than one serving of alcohol and take even longer to metabolize,” the Mayo Clinic says.

Alcohol Poisoning and Other Dangers

“Drinking too much too quickly can affect your breathing, heart rate, body temperature, and gag reflex, and potentially lead to a coma and death,” the Mayo Clinic advises.

As alcohol impairs judgment and thinking ability, many people might not even be aware that the dose of alcohol they drank before passing out might be their last one.

“You can consume a fatal dose before you pass out. Even when you’re unconscious or you’ve stopped drinking, alcohol continues to be released from your stomach and intestines into your bloodstream, and the level of alcohol in your body continues to rise,” the Mayo Clinic says.

Binge drinking is also hazardous to one’s safety. Injuries that result from having too much to drink can prove serious or fatal, and risky alcohol consumption can lead to a number of unfavorable outcomes. Those listed by the CDC include:

Alcohol use disorder is estimated to affect at least 16 million Americans, according to the NIAAA. Not everyone who drinks is at risk of developing AUD. Some are at higher risk because of genetics, family history, or social or home environment.

The Costs of Pandemic Drinking

It will be some time before the real effects of pandemic-related binge drinking are realized. What’s clear now is that binge drinking is on the rise, furthering the possibility that many people will develop addictions that will change their lives forever.

David H. Jernigan, a professor of Health Law, Policy & Management at Boston University recently wrote a commentary published in The Conversation, predicts that this increase in quarantine drinking will mean more people will develop alcohol use disorders.

“As someone who has spent 30 years studying the link between alcohol policy and public health, I know that this is likely to result in a spike in alcohol use disorders for years to come,” he writes.

Jernigan also highlights how drinking alcohol weakens the immune system, which can impair the body’s ability to fight off infections such as COVID-19.

More binge drinking also means the United States likely will lose billions of dollars more than it already has. According to the CDC, “Drinking too much, including binge drinking, cost the United States $249 billion in 2010, or $2.05 a drink. These costs resulted from losses in workplace productivity, health care expenditures, criminal justice costs, and other expenses. Binge drinking was responsible for 77% of these costs, or $191 billion.”

Keeping Your Drinking in Check

There’s no doubt this is a stressful time for many, and no matter what happens, we all are tasked with holding ourselves together and doing the best we can. If you have noticed that you are drinking more frequently during this isolation period or drinking more alcohol than you intended, you are encouraged to check in with yourself and try a strategy or two to limit your alcohol intake as much as possible. Tips include eating while drinking and slowing down and taking sips of the beverage instead of big gulps or chugs. You may also want an accountability partner who can keep you on track with your goal to cut back.

Setting healthy limits on your drinking can help, but you might want to abstain if you find that you can drink in moderation. If you don’t know how much is too much for you, the NIAAA offers this tool as well as drinking tracker cards that you can print and use. There also are smartphone applications like this one that can help you take control of your drinking.

If you meet the criteria for alcohol use disorder, which ranges from mild, moderate, and severe depending on how many of the criteria you meet, consider seeking professional help from an accredited treatment facility that can help you regain sobriety and get your life back.

Seasonal Affective Disorder: How to Combat SAD in 2020

How to Help Relatives Struggling With Addiction During the Holidays

Facing Another Lockdown Quarantine: How to Stay Clean This Time Around

INSPIRING WELLNESS
THROUGHOUT THE NATION, THAT'S
THE DELPHI DIFFERENCE.

Get our Weekly Email Newsletter

By submitting, you agree to send your email to Delphi Behavioral Health Group and it's sponsors. Information provided here is subject to our privacy policy.