How Long Does Trazodone Stay in Your System? (Blood, Urine & More)

While research is slightly lacking, trazodone has a half-life of about eight to 15 hours. Drugs are mostly out of the system after about four to five half-lives, so it takes roughly 32 to 75 hours for trazodone to leave the body.

It is generally prescribed in doses ranging from 150 mg per day to 400 mg per day, with doses for severe cases going as high as 600 mg per day. It should only be taken as prescribed.

How Long Trazodone Stays in the Body

Toxicology research into precisely how long trazodone can be detected in the body is relatively scarce, namely because it has not been shown to have high abuse potential and is not generally tested for in routine drug tests. Some data points are available; however, that can help you determine whether it is likely still in your system.

According to the U.S. National Library of Medicine, when taken in an extended-release oral dose, 70 to 75 percent of trazodone is excreted in urine within 72 hours. The dose in question, in this case, was a single 300 mg dose.

Data on trazodone’s detectability in blood testing is more limited. Urine tends to be a less invasive method for drug detection in general while simultaneously being about as likely, or more, to detect abuse in the same window. Exactly how comparable the window of detection is between blood and urine for trazodone is currently unavailable.

Most blood testing for trazodone use actually comes post-mortem from suicide victims. Trazodone can be poisonous if abused, especially if mixed with other drugs, and it can also cause suicidal thoughts.

If you are on trazodone and experience suicidal thoughts, report them to your doctor immediately.

Dr. Jim Phelps, a psychiatrist who specializes in bipolar disorder and depression, has written on the subject of antidepressants and how long they generally stay in the body. While he admits it is a rough estimate, he discusses how many doctors use a few factors to quickly estimate how long drugs stay in the body.

Since trazodone’s half-life is about eight to 15 hours, it should take somewhere between 32 to 75 hours for the drug to be gone from your system.

Of course, the chemistry of an individual’s body is rarely that simple. The following factors can affect exactly how long a drug stays in the body:

Generally speaking, the more of a drug you take and the smaller you are, the longer the drug will be detectable. Many of the same factors are what a doctor will use to determine your dose in the first place. Smaller people generally require lower doses for an equal effect compared to larger individuals. 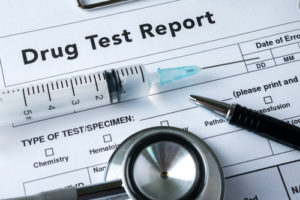 Trazodone has been shown to lead to false positives on drug tests for amphetamine use. While more studies should be done on false positives in general, be sure to alert anyone administering a toxicology test about your trazodone use and your concerns about false positives.

Labs should be aware of what drugs can cause false-positive results. However, considering the consequences for failing a drug test can be quite severe in some circumstances, making doubly sure everyone is aware of potential problems associated with any prescription drugs you are on is never a bad idea.

While there is not much research regarding trazodone causing false positives on a hair drug test, it is worth mentioning if you have taken trazodone in the past 90 days. Hair tests can detect drug use pretty far back in your history.