Did you know that 40 million adults ages 18 to 25 in the United States (18.1 percent) struggle with an anxiety disorder United States? Current statistics, however, place this number at around 30 percent because many of those individuals do not report their disorder.

Another study has highlighted that anxiety disorders cost the U.S. an estimated $42 billion a year, and more than $22 billion of the costs are associated with repeated use of health care services. Those with anxiety are three to five times more likely to go to the doctor and six times more likely to be hospitalized for psychiatric disorders.

Anxiety is a severe problem that is not only taxing to the economy but for the people who are struggling as well. There is always a need for relief, but often, those who seek relief look in the wrong places.

A recent survey conducted on employees found that 41 percent of individuals reported high levels of anxiety in their workplace. High levels of emotional exhaustion that come from workplace anxiety are correlated with lower job performance. With such staggering numbers, it should come as no surprise that 65 percent of North Americans take prescription medications daily, and 43 percent of those take mood-altering prescriptions regularly. Anxiety and depression are two issues that can cause one another and vice versa. Depression is another disorder that affects individuals from all socioeconomic backgrounds without discrimination. Like anxiety, the disorder can be crippling and destroy the quality of a person’s life. With so much stigma surrounding mental health issues, some individuals may opt to medicate themselves rather than speak with a physician.

Unfortunately, 300 million people worldwide struggle with depression and 16.2 million of those living in the U.S. The numbers paint a grim picture, and more needs to be done to end the stigma around mental illness. Self-medication is a severe issue that can lead to addiction.

Self-medication is a treatment of common health problems with medicines designed and labeled for use without medical supervision. Each day, individuals reach for self-care products to help alleviate symptoms of an issue that is plaguing them. They do so because it makes it easier for them, and it may be more cost or time-efficient. One such medication is phenibut. While the drug is not available by prescription in the United States, it is a drug that can be bought online as a supplement.

In some cases, individuals don’t have insurance to go to a doctor and treat their disorder, but they still need a means of relief. Buying these drugs online is not a viable option, and phenibut has been shown to cause addiction in those who abuse it. Let’s take a more in-depth look at what phenibut is and how it affects us.

Phenibut is an anti-anxiety medication prescribed in Russia. Since the 1960s, it has been used to treat depression, insomnia, stuttering, irregular heartbeat, vestibular disorders, post-traumatic stress disorder (PTSD), and other disorders. The drug is a GABA-B agonist and goes by the name B-phenyl-y-aminobutyric acid or phenyl-GABA. The drug is considered to be a synthetic form of gamma-Aminobutyric acid (GABA), which is one of the brain’s inhibitory neurotransmitters.

GABA works by binding to its receptors and opening up a channel to a negative charge. This negative charge slows down activity in the brain, which allows you to relax, relieve anxiety, and relax your muscles. Many central nervous system depressants increase GABA’s efficacy to increase the potency of its relaxing effects. 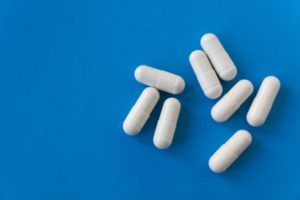 Our brain produces GABA to induce anxiolytic feelings. Someone with anxiety may have a chemical imbalance or psychological issue in which their natural chemical processes aren’t enough to relieve stress and anxious thoughts Drugs like phenibut aim to create more GABA and provide relief and reduce tension in social situations. Phenibut also possesses sedative effects.

The drug has not been approved in Western countries, but it can be found online as a supplement. It was created in St. Petersburg, Russia, in 1963 as an experimental drug for young individuals going through psychiatric treatment. The drug became more widespread by 1975 and was abused for its calming and mentally stimulating properties. A 2013 study highlighted the challenge of overcoming dependency on phenibut, and how it involves anxiety, irritability, and anger. The study highlighted how it took 24 weeks of treatment until a person was in remission from dependency.

What are the Signs of Phenibut Addiction?

To better understand how addictive phenibut may be, the European Monitoring Centre for Drugs and Drug Addiction 2013 Annual Report highlights phenibut as one of 81 new psychoactive substances that require immediate attention. A similar problem in the United States with designer drugs is how they are labeled; phenibut is marked as a supplement that can be purchased online legally.

Due to its legal status, it has not been tracked by drug monitoring systems and has appeared on health food store websites. Unlike designer drugs, this is displayed as healthy, meaning it can give a false sense of safety when purchased.

Withdrawal symptoms can be severe as individuals will gradually increase their dose to maintain the high. Signs can initiate in as little as three to four hours after the last treatment. If you or a loved one has been using the drug for any reason, it could lead to an addiction.

Signs Of A Phenibut Addiction Include:

Phenibut as a Nootropic

Nootropics are controversial drugs that are claimed to enhance cognitive function. There is a wide variety of drugs that are reported to be nootropics, and they may work in the brain in several very different ways. They aren’t as narrow a category of drugs as other categories like benzodiazepines or central nervous system depressants. Some nootropics are basic supplements that have very mild effects on the body. They are said to boost cognitive function. Others are serious psychoactive drugs like phenibut.

Other drugs, like central nervous system stimulants used to treat ADHD, are commonly used for nootropic, performance-enhancing, and cognitive-boosting effects on college campuses. However, misusing these stimulants can lead to serious side effects and addiction.

Phenibut is fairly unique. While many nootropic drugs are substances that increase nervous system activity, phenibut is a depressant that slows activity in the nervous system. This may have to do with the drug’s ability to stimulate dopamine receptors, which are tied to reward and motivation. However, the cognitive-enhancing properties of drugs like phenibut aren’t definitively proven in healthy people who don’t need them for therapeutic purposes.

Like many other nootropic supplements, phenibut is unregulated and unapproved in the United States. As an unregulated new drug in the U.S., it’s technically illegal to sell it as a drug, supplement, or food additive, but it’s relatively easy to buy and use online. However, since it is unregulated, it’s difficult to ensure that what you’re buying is genuine phenibut. You may purchase an inert substance with no effects or another substance that can have potentially dangerous effects.

At small-to-moderate doses, genuine phenibut is relatively safe and well-tolerated. However, it is a significant depressant drug. Taking a depressant without consulting a doctor may be dangerous for some people. Taking the drug in higher doses may come with some serious risks and side effects. Regular use of the drug in moderate doses can cause chemical dependence and tolerance. Dependence occurs when your brain adapts to the presence of a drug and starts to counteract it. This may make you feel the drug is less effective and that you need to take higher doses over time.

If you become chemically dependent on phenibut, cutting back or quitting may produce uncomfortable withdrawal symptoms. Central nervous system depressants are known to cause particularly severe withdrawal symptoms, and some can be life-threatening. Phenibut has been shown to cause anxiety, irritability, insomnia, agitation, hallucinations, and temporary psychosis. Phenibut rebound anxiety can be particularly severe.

Very high doses of phenibut can cause potentially deadly overdose symptoms. Plus, unregulated drugs may increase your risk of an overdose because each dose may be unpredictable in its relative strength. As with other depressants, phenibut may be even more dangerous when it’s combined with alcohol, other depressants, or opioids. Phenipute overdose symptoms could involve drowsiness, nausea, vomiting, drowsiness, unconsciousness, and seizures. Very high doses or high doses over a long period may also damage your liver.

The Boston Globe released a report in 2015 that states 23,000 people end up in the hospital after consuming unregulated supplements each year. More than a quarter of these ER visits involved young adults. Some of the complaints that drove them to the hospital include cardiovascular symptoms, heart palpitations, chest pain, allergic reactions, choking, and difficulty swallowing. Phenibut heart palpitations should be taken seriously and reported.

As we described earlier in the article, those being treated for phenibut addiction showed symptoms up to 24 weeks after stopped use. What this says is how important it is to complete the continuum of care if you are addicted to phenibut. Co-occurring disorders or polydrug use can complicate withdrawal from phenibut, and the first step in treatment will be medical detoxification. It is imperative to surround yourself with addiction specialists who can provide around-the-clock care in a safe environment.

To overcome some of the worst symptoms associated with phenibut withdrawal, the clinicians could provide you with medication that alleviates some of the worse symptoms you may experience. By doing so, it will make the process a little more comfortable while you begin to overcome your dependence on phenibut.

Depending on the severity of the addiction, the clinicians could recommend you continue your journey to recovery in a residential treatment center. Due to how long the drug may cause symptoms, you will be best suited in an environment that can remove you from access to purchasing more phenibut. You will participate in therapy that teaches you how to cope with triggers outside and overcome temptations to use. If the team determines that your addiction is not severe, they will place you into an outpatient treatment center that has the same goal. They will provide therapy sessions, but it will allow a smoother transition back into life outside of recovery since you will be able to return home after therapy.

Experience the Delphi Difference and Get Treatment Today

If you’re ready to start your addiction treatment, don’t do it alone. Delphi Behavioral Health Group’s addiction specialists are among the most experienced in the country, and they’re here to help you take that first step toward an addiction-free life. We provide what we call the Delphi difference, and you will feel it the second you give us a call.