What Are the Short-Term and Long-Term Effects of Fentanyl Use?

As an extraordinarily potent opioid, fentanyl can cause a variety of effects.

Most people in the United States have at least heard of the opioid crisis. We see news about overdoses, misuse, and fatalities on an almost daily basis. Heroin, prescription painkillers, and other opioids are known for their negative impact on society, and now, fentanyl has become well-known in the public eye.

Fentanyl is a synthetic opioid. Though similar to other painkillers such as morphine, it is at least 50 to 100 times stronger. It can be used for medical reasons and with a prescription, but it has become popular outside of legal use.

People often run into fentanyl when it is used as an adulterant in other drugs, but they may occasionally seek it out without fully understanding its long-term and short-term effects.

Differences Between Legal and Illicit Consumption

Patients are sometimes given fentanyl as a painkiller via medical supervision if they have a high tolerance for other opioids.

The Alcohol and Drug Foundation says it is an effective painkiller because it can bind with opioid receptors in the brain and cause changes in how you react to pain. This could even result in feelings of euphoria and relaxation.

Legal forms of fentanyl are sold as a patch, a lozenge, or an injection. Per MedlinePlus, patients who use the fentanyl patch should make sure it is not damaged because it is meant to ensure you receive the dose over three days. If a patch is cut or damaged in any way, you may receive the full dose at once and risk an overdose.

Illicit forms of fentanyl are created in labs, and they can be found in various forms. Fentanyl is sometimes made into a nasal spray, sold in an eyedropper, or found on blotter paper.

Diversion of a fentanyl supply: Legal prescriptions of fentanyl can wind up in the wrong hands when:

Illicitly produced fentanyl: This is fentanyl created in a lab that is made to be distributed illegally. It may be:

No amount of illicit fentanyl is safe. It affects people differently depending on various factors, such as height, weight, age, and health history. Other variables in how fentanyl might affect you are:

Fentanyl may result in the following short-term effects:

Overdose is the most serious short-term effect, and incredibly small doses of fentanyl can result in overdose.

When used consistently, fentanyl and other opioids can cause the following long-term effects:

How Does Fentanyl Affect Your Body Long-Term?

Those who use fentanyl in the long term expose themselves to an array of problems. For example, a person who smokes fentanyl sets themselves up for severe problems with their lungs. Smoking fentanyl makes it challenging to control the dose, which increases the chances of a fatal overdose. The rapid onset of the drug will encourage the user to continue using, thus increasing the chances of becoming addicted. Smoking fentanyl can cause long-term lung damage and other severe respiratory problems. If a person were to contract a serious disease like COVID-19 and smoke fentanyl, it could cause death.

For those who inject fentanyl, they are at risk of contracting diseases like HIV or hepatitis C. When you’re abusing drugs and run down from malnutrition and a lack of hygiene, your body will have a much harder time fighting off the disease. At first, we’ll use the drug and believe it’s not causing any damage. However, the longer we use the drug, the more damaged our bodies will get. In fact, fentanyl can also affect our heart and blood pressure.

Hypotension is something that occurs after general anesthesia is introduced to an individual’s body. While fentanyl is most commonly known as an illicit street drug, it’s also used as a last-resort prescription painkiller. Similar to barbiturates used to treat severe epilepsy or other conditions where benzodiazepines fall short, fentanyl is used when all other avenues are exhausted in treating chronic pain. For example, a person who’s diagnosed with complex regional pain syndrome (CRPS), also referred to as the Suicide Disease, could be a candidate for fentanyl if other painkillers they’ve used stop working.

One effect we tend to overlook about opioids is their effect on blood pressure. Hydrocodone, morphine, and hydromorphone can trigger a histamine release, resulting in a significant decrease in systemic vascular resistance and blood pressure. The effect can be treated with certain antagonists but can be dangerous without the proper medical care.

Although the opioids we mentioned above can cause a histamine release, fentanyl cannot. When the drug is used during surgery, it can lead to minimal changes to cardiovascular function. Intravenous fentanyl can cause a modest change in heart rate and blood pressure. However, it’s vital to mention that using fentanyl with depressants, like benzodiazepines, can lead to significant cardiovascular changes, including decreased cardiac output and stroke volume, as well as profound decreases in someone’s blood pressure.

Fentanyl administration in analgesic doses can lead to hypotension, as you’d expect from other opioids. Hypotension from fentanyl includes orthostatic hypotension and syncope but is said to be well-tolerated, even in those with coexisting cardiac disease. Bradycardia has been reported by some following chronic use at an analgesic dose. However, it’s very rare.

All of this refers to medical-grade fentanyl. For someone who is prescribed the drug by their doctor and becomes addicted, it may cause them to seek street fentanyl. Fentanyl you find on the street is even more dangerous than pharmaceutical-grade fentanyl because it’s made in clandestine labs without sanitary standards. The fentanyl could be cut with something that interacts with cardiac problems you might have. Unless it’s absolutely necessary, you should avoid fentanyl at all costs.

Used to Cut Other Drugs

Per Harvard Medical School, opioids like fentanyl are fatal even at small doses. It is dangerous to take fentanyl even when you seek it out, but many drug overdose deaths from fentanyl occur when someone takes it by accident.

“Per the National Institute on Drug Abuse (NIDA), in 2016, fentanyl and other synthetic opioids passed prescription opioids as the most frequently found drugs in overdose deaths. Fentanyl is often mixed into other drugs. Most people who die by overdose usually test positive for other drugs as a result.”

Substances like cocaine and heroin are now laced with fentanyl because it is a cheap substitute that drug dealers can use to make more profits. People may also end up with fentanyl if they buy prescription pills from drug dealers.

Are the Effects Reversible?

People who ingest fentanyl often believe they are taking something else, such as ecstasy, cocaine, heroin, or methamphetamine. This makes it hard for doctors to determine the cause of an overdose.

Naloxone can delay or stop an opioid overdose if given to the person in time, per NIDA. Naloxone can help by interacting with opioid receptors in the brain to stop the effects of fentanyl. However, fentanyl is stronger than opioids like heroin, and more than one dose of naloxone may be necessary to reverse its effects. 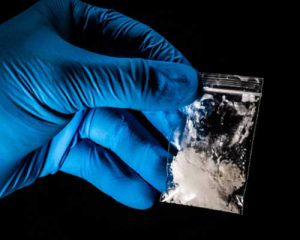 If you suspect someone is overdosing on fentanyl, call 911.

Once naloxone has been administered, the person should be observed to ensure their breathing does not decrease or stop.

You may be able to keep naloxone around if you know someone is at risk of an opioid or fentanyl overdose.

Some states have enacted laws allowing people to buy it without a prescription.

Training is available for people who want to learn to administer naloxone correctly if there is an emergency.

Treatment is the best path forward for people who misuse opioids like fentanyl. Treatment will likely include medical detox. Since fentanyl is such a strong opioid, it’s likely that medication-assisted treatment, such as the use of buprenorphine or methadone, will be used. This can help to reduce withdrawal symptoms and opioid cravings.

A November 2018 report from The Atlantic states that people are more successful in recovering from opioid misuse if they have access to medication that reduces cravings. Other strategies for treatment include therapy, group meetings, and learning skills needed to stay away from drugs.

Treatment can also include help in the case of relapse. It is normal for people to fall back into use before making a complete recovery. It’s just as imperative to get back on track with treatment to prevent relapsing again.

Opioid treatment is absolutely necessary to overcome opioid addiction. Without help, you’ll never be able to break the cycle or understand why you have an urge to use a potent drug like fentanyl. Make sure to get the help you need and save your life.