Attention-Deficit Hyperactivity Disorder and autism spectrum disorder are both issues that begin in early childhood and affect the way a child’s brain develops. Both can be difficult to diagnose, and they share some of the same characteristics. A closer look reveals that each of these neurodevelopmental conditions is distinct. But is there a link between the two? Is it possible to have both ADHD and autism at the same time? Learn more about these two disorders and their connection.

Attention-Deficit Hyperactivity Disorder (ADHD) is a disorder that affects a person’s ability to remain focused on tasks and control impulsive behaviors. According to the Centers for Disease Control and Prevention (CDC), ADHD is the most common neurodevelopmental disorder in children. That means it affects the brain and the way the nervous system develops.

ADHD can hinder your ability to function in a typical school or work environment. While there is no cure for ADHD, it can be treated. Learning to manage the symptoms can help people with the disorder function and thrive in daily life. Medications can also be helpful in easing some disruptive symptoms.

ADHD has two major facets. The attention side of the disorder refers to problems that affect your ability to focus. Your mind may wander, and prolonged cognitive tasks may be uncomfortable or difficult to accomplish. Children and adults with ADHD may daydream or make careless mistakes that come from inattention. The hyperactivity side involves symptoms that make it difficult to sit still, wait your turn, and resist impulses to get up and move.

How Common is ADHD?

ADHD is the most common neurodevelopmental disorder, but how common is it? You’re most likely to be diagnosed with ADHD when you’re a child, especially children that start school for the first time. According to the CDC, 8.8% of children in the United States between three to 17-years-old had been diagnosed with ADHD at some point in their lives as of 2019. The disorder is more commonly diagnosed in boys. Around 11.7% of boys and 5.7% of girls were diagnosed with ADHD.

ADHD was thought to only affect children and that adults would eventually outgrow it. However, ADHD can persist into adulthood, and it’s possible for it to go undiagnosed in children that eventually seek a diagnosis as adults.

The causes for ADHD are largely unknown, but researchers have identified some potential risk factors. Genetics seems to play a significant role in the development of ADHD based on studies of twins. That means you may be more likely to have ADHD if your parents or grandparent had the disorder. Still, that doesn’t mean that ADHD is inevitable. As with many mental and developmental disorders, the cause is probably a combination of genetic and environmental factors.

Autism spectrum disorder (ASD), also just called autism, is a developmental disability that can affect the way you communicate, behave, and learn. ASD is called a spectrum because there is a high degree of variability between different people with autism. The symptoms and experiences one person with autism goes through may be very different from another person’s autism experience. However, some common factors among people with autism across the spectrum are challenges with social interaction, cognitive dysfunctions, oversensitivity in certain senses, and repetitive behavior like pacing back and forth.

The symptoms of autism are also present from an early age and may start to be noticeable to parents and other adults when a child reaches school age.

Like ADHD, autism was divided into several major types, but the Diagnostic and Statistical Manual of Mental Disorders (DSM-5) revised the classification of the disorder into a single diagnosis. Since the diagnosis of autism spectrum disorder can include a wide range of different types of autism, classifying it into distinct categories was no longer necessary.

However, even though you will no longer be diagnosed with these different types, the type categories are still used in describing different experiences with autism today. Because it can be frustrating for patients with a diagnosis to suddenly be told that their diagnosis now has a new name or is no longer used, many doctors continue to use these type-terms with patients that have already received a diagnosis.

These types can include:

While these categories are useful in describing the experiences of some people with ASD, the lines between the types can be blurry for others. For that reason, most doctors and clinicians have adopted the description of autism as a spectrum that’s presented in the DSM-5.

How Common is Autism?

Autism affects children at an early age, and some parents notice the signs before a child reaches school age. However, children that enter school with an undiagnosed ASD may start to experience challenges that may be noticed by parents and teachers. The CDC’s most recent data on the prevalence of autism comes from 2016 data from the Autism and Developmental Disabilities Monitoring Network that found 1 in 54 children has autism spectrum disorder (AUD). Like ADHD, autism is more common in boys than in girls, with the disorder affecting boys 11 times more frequently. There has been a steady increase in reported autism rates, but the cause is unknown and may have to do with diagnosing practices and awareness.

The cause of autism isn’t fully understood. Like with many disorders that affect mental health and neurodevelopment, it’s thought to be caused by a variety of factors. Like ADHD, there may be a genetic component to the development of autism, which means that parents with the disorder may have children and grandchildren that have it too. Researchers are also investigating potential environmental causes like early viral infections that may lead to autism in children.

Why are ADHD and Autism Misdiagnosed?

ADHD and Autism are both mental and developmental abnormalities that start at an early age. Young children often show the signs of these issues early on in life, particularly when they reach school age. Because young children are still in the early stages of development, it can be difficult to get an accurate diagnosis. There are no medical tests that can determine if a person has ADHD or autism. So doctors and psychologists rely on psychoanalysis, questionnaires, and observable signs to diagnose these issues.

Adults are able to communicate their symptoms and perceptions more clearly than children, so they are often easier to diagnose when it comes to mental health disorders. However, people with ADHD and autism can begin to struggle with life at an early age if their issues aren’t addressed. For that reason, it’s important for clinicians to be able to assess and screen for ADHD and autism.

Autism and ADHD have other similarities that may make them difficult to tell apart without a closer look. Similarities induce:

What’s the Difference between ADHD and Autism? 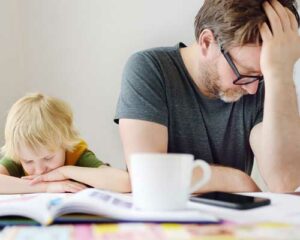 While there are several similarities that are shared between ADHD and autism, there are many distinctions. One significant difference is that ASD is more variable than ADHD. There are three different types of ADHD and each person may have their own set of symptoms, but autism is a spectrum that can include a wide variety of different experiences. Even if a symptom looks the same for ADHD and autism on the outside, the causes of that symptom may be different. For instance, inattention is a common trait for children with both disorders. But the child with ADHD may understand a task and why they should complete it and be unable to focus on it. A child with ASD may not be able to understand the task, how to do it, or why they need to do it. They may also be extremely focused on another thought or stimulus.

Here are some other common differences:

How is ADHD Diagnosed?

ADHD is a developmental disorder that can’t be identified with a medical test like many physical diseases can. However, getting an accurate diagnosis may mean exploring many possible explanations. For that reason, it may be wise to get a blood test and a physical exam from a doctor to rule out other potential explanations for your symptoms. Ultimately, attention deficit hyperactivity disorder is diagnosed through psychoanalysis, questionnaires, and speaking with a doctor or psychologist. The DSM-5 is often used to make an ADHD diagnosis. It also helps distinguish between the three types of ADHD.

Here’s a breakdown of the DSM’s criteria for diagnosing ADHD:

How is Autism Diagnosed?

Like ADHD, Autism can’t be diagnosed with a medical test like a blood test or physical exam. Instead, it’s diagnosed with psychological exams and other observational signs. The DSM-5 changed the way autism is diagnosed significantly. Before the revisions, autism was broken up into different categories based on severity and specific symptoms. However, autism is so variable; many clinicians believed the categories weren’t able to accurately describe autism as a whole. Instead, it’s now defined as an autism spectrum disorder, which encompasses the full range of possible symptoms and severities.

It’s important to note, the criteria for an autism diagnosis looks at deficiencies and uses words like “deficit.” This language is debated because of the way it may impact people to learn they have a chronic condition that causes deficits. However, being diagnosed with a disorder doesn’t mean you are doomed to be deficient, and you may learn to cope with autism on your own or with help in a way that allows you to live a productive and meaningful life.

Here’s a breakdown of the diagnostic criteria in the DSM-5:

You must also experience two of the four types of restricted, repetitive behaviors.

There are also other diagnostic criteria based on the specific factors surrounding these symptoms. These symptoms have to be present at an early stage of development, they have to impair certain areas of your life, and they can’t be better explained by other factors like global developmental delay or intellectual disability.

How is ADHD Treated?

There is no known cure for ADHD, but it can be treated with medications and behavioral therapies. Prescription medications can be used in children and adults with ADHD, though it’s usually recommended that children under three should avoid these prescriptions. Stimulant drugs like amphetamines are among the most common when it comes to treating ADHD. Drugs like Ritalin, Concerta, and Adderall are among the first-line medications for the disorder. These drugs can increase dopamine levels, which is a chemical in the brain that’s tied to ADHD.

Parental training and behavioral therapies can also help children and adults learn to cope with symptoms and live productive lives.

How is Autism Treated?

There is also no cure for autism currently, but many people with ASD are able to live full and productive lives. Some adapt to the world around them on their own, learning to develop social and communication skills over time. Other people are able to learn to cope with ASD symptoms through therapy. Since autism can affect people differently, treatment needs to be personalized, meeting the needs of individual people. Parental training and family therapies may be able to help parents intervene in important early developmental years. Behavior and communications therapies can also help develop skills to deal with everyday life.

Is There a Relationship Between Autism and ADHD?

The clearest link between ADHD and autism is the fact that they are both neurodevelopmental disorders that start during childhood. They may have some similar characteristics and they may even share some common causes. In some cases, both ADHD and ASD can occur at the same time. Children on the autism spectrum may also struggle with the neurobiological issues that cause ADHD. This can further complicate the process of getting a diagnosis. The CDC reports that 14% of children with ADHD also have ASD.