Comparing Desoxyn and Adderall What are the Differences

Desoxyn and Adderall are different types of amphetamines, but they have a lot in common.

Amphetamines are a class of central nervous system stimulants. This class includes the drugs:

Amphetamines are part of a large class of drugs that are often referred to as stimulants. These drugs all act similarly and have minor differences in their chemical composition.

They have numerous medical uses that include the treatment of different types of psychological disorders like attention-deficit hyperactivity disorder (ADHD), sleep disorders like narcolepsy, and issues with lethargy in neurological conditions like a head injury or stroke. They are also used as diet aids or treatments for obesity in addition to many other potential medical uses.

Stimulants can be significant drugs of abuse. Many are classified as controlled substances. Both Adderall and Desoxyn are classified in the Schedule II (C II) category.

The methamphetamine in Desoxyn is essentially the same methamphetamine that is privately manufactured and abused, often referred to as meth, crystal meth, or glass. However, Desoxyn does not contain the potentially harmful additives found in street versions of meth, such as phosphorus, sulfur, lithium, and others.

Mechanism of Action of Both Drugs

Both Adderall and Desoxyn share a similar mechanism of action.

Methamphetamine has an extra methyl group that allows it to cross the blood-brain barrier faster than the amphetamines in Adderall. This means that the onset of action for Desoxyn is a bit quicker than it is for Adderall.

Desoxyn usually is available in 5 mg (milligram) tablets. For ADHD, an additional dose of 5 mg once or twice a day is used. The goal is to slowly increase the dosage until the symptoms of ADHD are controlled. Effective doses are usually between 20 and 25 mg.

For the treatment of obesity, it is suggested that a 5 mg tablet should be taken 30 minutes before each meal. Treatment should only continue for a few weeks. Using Desoxyn in children under age 12 to treat obesity is not recommended. 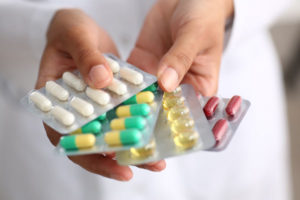 Adderall tablets are available in doses from 5 mg up to 30 mg.

Doses begin at 5 mg, and then the dose in the pills is increased by 2.5 mg increments up to a maximum of 30 mg per tablet. Use of immediate-release Adderall is not recommended for children under age 3.

Doses for ADHD vary depending on the age of the child. A child who is between 3 and 5 years old should begin with a dose of about 2.5 mg a day. This can be increased by 2.5 mg weekly until the optimal response is achieved.

Children older than age 6 will often begin with 5 mg once or twice a day.

Then, increases of 5 mg weekly can be used until optimal effects are achieved. Exceeding daily doses of 40 mg per day is typically not necessary.

In the treatment of narcolepsy, individuals are usually given between 5 mg and 60 mg per day in divided doses, depending on the case.

Narcolepsy is very rare in children under age 12, and significantly lower doses would be used in these cases. There is also an extended-release version of Adderall that can be used once a day for children with ADHD.

The side effect profile for both drugs is similar.

Rarer side effects such as tremors, seizures, psychosis, or allergic reactions may also occur in some people.

Both Adderall and methamphetamine are significant drugs of abuse; however, methamphetamine that is primarily abused on the street is privately manufactured meth and typically not extracted from Desoxyn.

Adderall tablets are usually ground up and snorted by those who abuse the drug, but they can also be mixed with water and injected or even smoked. Meth is more likely to be injected or smoked.

Both drugs may be abused in combination with other drugs, including alcohol, prescription drugs like opioids or benzodiazepines, other stimulants like cocaine, cannabis products, and even hallucinogenic drugs.

Chronic abuse of either Adderall or meth can lead to significant physical, psychological, and neurological damage.

Because street meth is adulterated with so many potentially toxic substances, the effects of abusing it are often observed much quicker, and they are much more severe than in individuals who abuse Adderall. Problems with the skin, including severe infections or even gangrene, issues with dentition, and increased risk to develop severe organ damage are more likely with the use of street meth.

In general, abuse of amphetamines can lead to:

Desoxyn and Adderall are amphetamines that are very similar in structure, medical uses, the potential for abuse, and mechanism of action.

The major difference between the two drugs is in the chemical structure of methamphetamine compared to the amphetamines that make up Adderall. This results in meth having a quicker onset of action and remaining in the body longer. This may also explain why meth is such a significant drug of abuse, but both drugs share a significant potential for abuse.