Meth Sores and Yellow Teeth: How to Recognize Abuse Effects

Most people have heard of methamphetamine thanks to Breaking Bad. This potent drug, known amongst drug users as simply meth, crystal meth, or ice, is a relative of amphetamines, which includes speed.

Meth abuse can very quickly wear on a person physically, causing apparent signs of abuse, such as yellow teeth and meth sores.

Meth is considered particularly dangerous because it can be made almost anywhere. Meth users tend to feel more alert and think they have more clarity, which they get from this stimulant drug.

Crystal meth can produce a high that lasts between four and eight hours.

The drug can be taken by:

Drug abuse often results in many negative consequences. Some of these take a while to become apparent.

People who take meth eventually manifest physical symptoms and some of these may present after just a few weeks of consistent use.

The National Institute on Drug Abuse (NIDA) describes some signs to look for that are particular to meth.

People who are exposed to secondhand smoke from meth may test positive in certain tests. More data is needed to know if secondhand meth smoke causes any negative health concerns.

Many sites have compiled mugshots, using available public data, of people who have been arrested for meth possession or who law enforcement officials noted were making meth at the time of their arrest. The graphic images prove that meth addiction manifests a variety of physical symptoms. 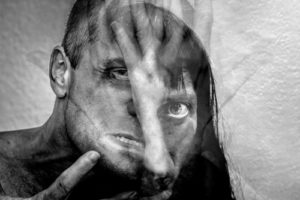 Sores and acne: People who use meth develop more sores and acne because meth causes blood vessels to become weaker. This means there is less blood that can go to other parts of a user’s body. As the skin begins to lose nutrients because of this lack of blood flow, a person’s skin may develop sores and acne that take a long time to heal. These sores are referred to as “meth sores.”

Rapid weight loss: Crystal meth causes people to become very alert, and this may make a person more physically active. While a person is physically active, meth also causes them to lose their appetite. Eventually, long-term meth users may appear to be malnourished and could become weak.

Dry mouth: The National Institute on Drug Abuse for Teens says meth decreases the amount of saliva in the mouth. The lack of saliva protecting the teeth leads to cavities. This often contributes to the yellow teeth associated with meth use.

Tooth decay: In addition to a decrease in saliva, many meth users have poor hygiene because they often binge on the drug and neglect to take care of themselves. They may also eat less nutritious foods and drink sugar-laden beverages.

Stained or crumbling teeth: Teeth may become stained and turn yellow or black. With time, they will also get weaker and start to crumble.

Bruxing: Also known as teeth grinding, this practice makes it easier for the enamel on the teeth to break. It adds to dental problems meth users may already be experiencing.

Skin picking: Long-term users of crystal meth make bad decisions because the drug starts to change their brains. This leads to erratic decision-making and even hallucinations. It is common for crystal meth users to think they are a host to insects, and they may pick their skin to fight these nonexistent bugs. By then, a person’s skin may already be in bad shape, and their meth sores could get infected.

Missing teeth: Because long-term meth users do not have good hygiene, their teeth become extremely delicate and could fall out suddenly.

Other Possible Signs of Meth Misuse

NIDA for Teens states that people who use crystal meth for a long time may also develop other issues.

Other Complications Of Meth

Can Physical Changes Be Fixed or Reversed?

The American Dental Association mentions a few preventative measures dentists can take if a patient is currently using crystal meth.

An individual who has used meth for a long time may have irreversible damage.

ADA says meth is very acidic, which contributes to the severity of the problems. Often, the best recourse is to remove teeth that are no longer healthy.

NIDA mentions that people who quit using meth may still experience psychosis because their brains may have changed so much when they were actively using the drug. A person who abstains from meth can experience relief from psychotic episodes, but they have to commit to staying clean so their hormone levels can return to healthy levels.

A person’s brain is damaged in the following ways when meth is used for long periods:

Death of brain cells: This is the most permanent form of brain damage because heavy meth use over a long time results in the death of brain cells in the frontal lobe — the part of the brain that helps with willpower and goal-setting. People may even present symptoms closely associated with dementia, schizophrenia, and psychosis. These brain cells do not return even after quitting meth.

Changes to the brain’s reward system: Long-term use of meth results in an increase in chemicals that cause new connections to develop so brain cells can communicate. These new connections help the brain get used to the overwhelming activity caused by meth. Even after quitting meth, these changes are shown to stay.

Drug use produces poor health, bad decision-making and may eventually lead to loss of life. Meth abuse is no different. It is imperative to look for the signs and take action.