Heroin is one of the main illicit drugs contributing to the unprecedented opioid overdose epidemic in the U.S. that has been widely recognized as one of the country’s most pressing public health emergencies.

In 2015, more Americans died from heroin overdoses than gun violence and the American Society of

Addiction Medicine estimates that at least 517,000 people in the United States are battling heroin addiction.

Heroin also has become even more of a menacing threat as it is mixed with or entirely replaced with the synthetic opioid fentanyl, which is a lot cheaper and easier to make than heroin as well as far more potent and deadly.

Also, according to the study, new opioid users prefer heroin over prescription drugs such as hydrocodone and oxycodone.

After the sample is collected, it is analyzed for diacetylmorphine and other metabolites. The urine test for heroin can find signs of use two to four days after the drug was taken. The urine of regular or chronic users can show evidence of use up to seven days after the drug was last used. The cutoff level for opiates, which includes heroin, is 2,000/ng/mL (nanograms per milliliter).

The hair follicle drug test for heroin can detect signs of heroin use up to three months or more since the drug was last taken.  HairConfirm explains that the ingestion of drug abuse can be revealed after an analysis of a small hair sample because the bloodstream feeds hair growth. MentalHealthDaily.com writes, “During a hair test, an individual is instructed to provide a hair sample (at least 3 cm to 6 cm).  These samples are then collected and analyzed to determine whether the individual has been using heroin (or any other drugs).”

There are some drawbacks to this method. One is that hair can be exposed to what it comes into contact with, so it can be easily contaminated. Another is this kind of screening will not show if someone used heroin within the past few days, according to MentalHealthDaily.com. But if someone uses it today and then is tested in a couple of months, a hair follicle analysis is more likely to reveal heroin use.

Heroin, also known as “diamorphine,” is an illegal opiate drug that comes from morphine, a naturally occurring substance that is taken from the seed pod of the Asian opium poppy plant. Heroin is three times stronger than morphine and has no accepted medical use, which is why the U.S. has labeled it as a Schedule 1 drug. This designation also signals that heroin has a high potential for abuse.

When people think of heroin, a white powdered substance comes to mind, but that’s only one kind. There are others, such as black, brown, and tar heroin, all of which are dangerous to use. 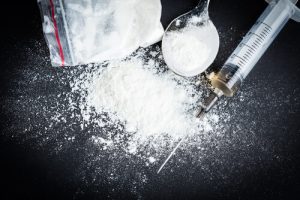 The drug is typically cut with other products, such as sugar, flour, starch, caffeine, powdered milk, and quinine. Such a hodgepodge of ingredients makes it difficult to know how pure the substance is, and such uncertainty can lead to death, especially if one of those mystery ingredients is fentanyl.

It has become increasingly common for synthetic opioids to be mixed into heroin, and this practice has contributed to the spike in drug overdoses in the United States.

Fentanyl is said to be 100 times stronger than morphine—the same substance heroin returns to upon entering one’s body—and binds to the brain’s opioid receptors, which regulate feelings of pain and pleasure.

People who use heroin typically inject, snort, or smoke it. Injection and snorting produce stronger highs and snorting raises overdose risks. After heroin enters the brain and goes back to its original morphine state, heroin users experience a rush of euphoria, relaxation, sleepiness, and reduced pain. These sensations are accompanied by a warm flushing of the skin, dry mouth, and a heavy feeling in the arms and legs, according to the National Institute on Drug Abuse (NIDA).

Heroin use brings with it its share of health problems. Users are at risk of clogging their blood vessels that are connected to vital organs, such as the liver, kidneys, and brain, which can all be permanently damaged.

How Long Does Heroin Stay in One’s System?

Recent heroin users who have recently stopped using the drug may wonder how long it takes for it to leave their systems. It depends on several factors, which are all unique to the person who used it.

Although the drug’s effects last for several hours, heroin is a quick-acting drug that reportedly has a short half-life of 30 minutes. This is the amount of time it takes for half the dose to be reduced in the bloodstream. However, not all drugs affect everyone the same, so other factors must be taken into consideration, too. They are:

Factors Affecting Length of Time in the Body

Heavy or frequent heroin users can expect the substance to remain in their systems longer than someone who uses it infrequently or occasionally. The purity of heroin use is also an important factor because the more potent it is, the stronger it is. Additives to mixtures containing the opiate may affect how long the substance lingers. Metabolism also matters. People with faster metabolism rates will process the drug more quickly.

Testing for Heroin Use

Many people in recovery are asked, at some point, to submit a sample for drug testing. It may be required during a drug treatment program or as part of an employment application or it may be part of a court-ordered program. If you or someone you know when a person There are ways to test for heroin despite its quick exit from the body. Tests that are commonly used to detect heroin use are:

All of these have been approved by the U.S. Food and Drug Administration (FDA). How long the substance is detectable depends on the drug test that is given. However, time is a key variable in drug testing, and evidence of heroin use is detectable up to a certain time with saliva and blood tests. Saliva samples may not be able to produce evidence of heroin use after a short period of 48 hours or less, and blood tests are also not the most reliable as the drug leaves the bloodstream quickly.

Because heroin is metabolized quickly and has a short half-life, advanced tests look for the presence of heroin’s metabolites, including 6-diacetylmorphine, morphine (MOR), M3G, and M6G, writes MentalHealthDaily.com.

The urine test and hair follicle test are viewed as more reliable because they can detect drug use after longer periods have passed.

What’s the Difference Between a Urine or Hair Drug Test?

Hair drug tests are not ideal for determining recent heroin use, according to HealthLine. Urine drug tests may be more appropriate for that purpose.

Wrestling with a Heroin Addiction? Let Us Help

The best way to clear any drug screening is to be completely substance-free. Whether it’s heroin or any other addictive substance, dependence on a drug jeopardizes the health, relationships, income, well-being and so much more. Battling an addiction with one of the most addictive drugs out there can be difficult without professional help from trained addiction specialists, but that’s what we’re here for. We can help you.

Treatment programs at Delphi Behavioral Health Group’s facilities provide unique therapy and counseling methods for certain addictions. They are designed to allow you to receive the daily support of the facility’s staff and your loved ones when you return home. Our treatment centers provide just what’s needed for community, counseling, and support throughout the day so clients can apply the lessons they learn to their lives everyday life. Give us a call to discuss your or your loved one’s options today.