DXM Abuse & Addiction- What Are the Signs & Symptoms?

If you live in the United States today, you probably grew up with ads for popular over-the-counter cough and cold medicines such as Robitussin DM, NyQuil, DayQuil, Theraflu, and other syrups, lozenges, and capsules.

These over-the-counter medications contain the ingredient dextromethorphan (DXM), a medication that acts as a cough suppressant. When used as directed, DXM-containing medications can help people get through the day. Some medicines are combined with additional ingredients to assist with fever, pain, and other maladies.

How DXM Works In The Brain

Dextromethorphan is an N-methyl-D-aspartate (NMDA) antagonist. The chemical derives from methorphan, a d-isomer of codeine, so like the original opioid, dextromethorphan suppresses coughing. However, unlike codeine, DXM does not trigger the opioid receptors, so it is considered safer for consumption than even low doses of codeine, which can still cause relaxation and sedation by binding to opioid receptors and releasing serotonin and dopamine, leading to higher addiction risks.

The drug is quickly metabolized into an active molecule, dextrorphan. That molecule is then metabolized down further as it binds to brain receptors and moves through the digestive system.

At OTC doses, the drug is typically safe for short-term or as-needed use; however, there can be side effects.

Rather than binding to opioid receptors, DXM binds to sigma ligands and the phencyclidine (PCP) channel. The active metabolite of DXM binds to high-affinity PCP sites, which may be part of the intoxication process at dangerously high doses.

When binding to brain receptors, especially at non-recommended doses, DXM releases serotonin. Even when taken at over-the-counter doses, DXM drugs are not recommended to be combined with prescription antidepressants, like monoamine oxidase inhibitors (MAOIs) and selective serotonin reuptake inhibitors (SSRIs).

This combination increases the risk of serotonin syndrome, a life-threatening condition in which too much serotonin is available in the brain. The individual can experience high fever and body temperature, fast heart rate, rapid breathing, hallucinations, and seizures.

In high doses, DXM is a dissociative anesthetic, much like ketamine. It can cause powerful psychedelic effects, which are typically dose-dependent. It is not possible to hallucinate or feel very high from a standard OTC dose, but people who abuse DXM often seek certain levels of dose-dependent effects.

There are four “plateaus” associated with specific doses of DXM, with a fifth that can quickly lead to toxicity or overdose.

Not everyone uses DXM as directed. Recreational use of cough medicines containing DXM is popular.

A 2013 case study from the Clinical and Research Institute on Addictions at the University of Buffalo estimates that 1 out of 20 teenagers has experimented with DXM.

The National Institute on Drug Abuse (NIDA) says DXM is commonly abused by:

The case study also says that teens and young adults between the ages of 12 and 20 years old make up 51 percent of emergency room patients because of DXM intoxication.

In street slang, using cough medication recreationally is known as “robotripping.” Other nicknames for this practice are:

Nicknames for gel capsules and cough medicine that are used to get high are:

Teenagers and people in other age groups may see the appeal in abusing DXM because it is legal and cheap. It may already be available in their homes and using it raises little suspicion.

Like any other substance, regular use of DXM could lead to misuse and even overdose.

How Dextromethorphan (DXM) Is Abused

The National Capital Poison Center (Poison Control) says the U.S. Food and Drug Administration approved dextromethorphan for use in over-the-counter medication in 1958. Manufacturers began including warnings on their product packaging to raise awareness about the dangers of DXM abuse.

Despite good intentions on the part of cough medicine makers, teenagers found that they could use medication with DXM to get high. 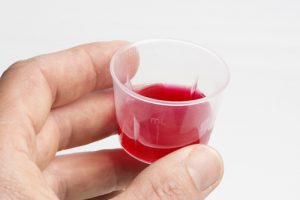 NIDA mentions that recreational use of DXM can cause effects such as:

Public health officials have also noticed that abuse of DXM also includes taking it with other substances.

What Happens If DXM Is Mixed With Other Things?

Even so, some people mix products that contain DXM along with other substances, including:

NIAAA states that a person can also experience the harmful effects of alcohol and dextromethorphan even if they are taken at different times. Alcohol affects the following populations differently:

Regular ingestion of DXM, or consistent misuse of products that contain DXM, leads to short-term and long-term effects.

Short-term effects of DXM include:

Other short-term effects are:

The long-term effects of DXM abuse still need to be studied, but DXM misuse can be fatal and result in brain damage. Overdosing on DXM is also possible.

Recognizing the signs of DXM misuse is key to finding help for a friend or loved one who may need it.

If dextromethorphan is consumed in doses larger than recommended over the counter, and larger doses are taken regularly to get high, your body may develop a dependence on DXM. Physical dependence means your brain requires the presence of a substance to reach chemical equilibrium feel normal.

When you do not have that chemical in your brain, you may experience withdrawal symptoms, which can be uncomfortable. Without medical intervention, withdrawal symptoms may lead to relapsing back into patterns of compulsive consumption.

Symptoms associated with dextromethorphan withdrawal reportedly include the following:

Anecdotal reports suggest that it takes about two days to overcome these common withdrawal symptoms without specific medical intervention. However, people who have abused large doses of DXM for a long time may suffer additional withdrawal symptoms such as:

These may begin three days after the last dose of dextromethorphan has been taken, so you may feel like you have stopped experiencing the more common withdrawal symptoms when the more intense ones begin. This can be very risky.

With many substances of abuse, withdrawal symptoms like cravings begin within one to three days after the last dose is consumed, but with DXM, individual reports suggest that cravings may take up to a week to begin.

Medical Supervision At A Detox Program

Drugs like opioids and alcohol have medications that can be used to ease the body off dependence on the substance while reducing the impact of withdrawal symptoms. These drugs are part of medication-assisted treatment (MAT), which allows safe tapering off certain intoxicating, addictive drugs while the individual undergoes therapy to reduce compulsive behaviors.

According to the National Institute on Drug Abuse (NIDA), there are currently no medications that can be used for MAT when it comes to dextromethorphan addiction.

This is true for the majority of over-the-counter medications, which means that the detox process may feel more intense and likely requires greater medical supervision to make it through safely.

The process of detox involves managing withdrawal symptoms, starting with a physical evaluation. A doctor, who may be your general practitioner but will more likely be an addiction specialist, will evaluate your experience of withdrawal symptoms from quitting DXM.

Mild symptoms mean you may be safe to attend an outpatient detox program and involve going in for checkups every few days or once a week while living at home. However, intense withdrawal symptoms—especially hallucinations and cardiovascular changes—may mean that you will be safer at an inpatient detox program where your vital signs can be monitored throughout the day.

The American Society of Addiction Medicine (ASAM) created a Continuum of Care to explain to clinicians and their patients how the different levels of treatment can be scaled. This scale mostly involves rehabilitation programs but can be applied to the detox process too.

Dextromethorphan (DXM) abuse is not always taken seriously considering the necessity of cold and cough medicines. Monitoring possible signs of abuse of DXM is important.

On a positive note, a 2016 study published in Substance Abuse Treatment, Prevention, and Policy mentions that DXM abuse went down by 35 percent between 2010 and 2015.

Like any other substance, abuse of DXM is a concern, especially since teens are more likely to abuse the substance than other age groups.

As mentioned by NIDA, signs that a teen is misusing substances include:

Similar signs in adults may be:

Exhibiting these signs might show that DXM abuse is part of a person’s life, and their misuse is serious. Thankfully, some treatments could help people who want to quit using DXM.

NIDA states that it is possible to treat people who misuse DXM, but currently there are no approved medications that can assist with this.

Some people may need to detox from DXM. When they attempt to stop using the drug, they may experience the following withdrawal symptoms:

NIDA mentions the following treatment approaches might be helpful for teens, but these principles can also assist adults:

Working with a psychologist could help teenagers change their attitudes and learn the skills needed to make better choices. Therapy often teaches skills that assist in staying away from drugs and handling cravings without the use of drugs. This may include:

This is often a way to continue applying skills learned in treatment for addictions. It may include:

These therapies involve the family in a teen’s recovery, including siblings and even close friends. It may involve a close look at:

Treatment can also help a teenager who may be combining substances with DXM and can assist them in dealing with this as well.

Individuals do not always intend to misuse drugs, even drugs as easy to find as medication with DXM. Parents can still take steps to prevent a teen’s use or misuse of DXM by:

Signs of a DXM Overdose

Not every DXM overdose results in a fatality, but Medline Plus reports that any of the symptoms below could mean that a person who took DXM requires medical assistance.

Taking care of an overdose at home is not recommended. If someone is experiencing these signs of a possible overdose, it is imperative to get professional help right away.

Your local poison control center can answer any questions about an overdose and provide instructions.

Their services are confidential, and they can provide directions on what to do.

They can also assist even if the symptoms caused by DXM are not an emergency. In the event of an emergency, call 911.