Drug Testing What Actually Works to get You Clean

Nearly half of the workforce in the United States reports that employers use drug testing to deter drug use by their employees. Drug testing in the workplace can help to keep employees from using illicit drugs that can impair their work performance, abilities, and health.

Drug testing in the workplace can be a condition of employment, such as pre-employment testing, or tests done at random intervals, periodically at prearranged times, after an accident (post-accident testing), or due to reasonable suspicion. It also could be a condition of returning to work after an absence or required after a positive initial drug test, upon completion of a required treatment program; this is called a return-to-duty drug test. Some companies may do drug testing at other times for various reasons.

According to information published by Quest Diagnostics, more than 4 percent of the American workforce tested positive for drugs in 2017. Drug tests are designed to determine if a person has used drugs within a specific period, and they do not check for actual impairment. Some drugs can stay in the body for a long time after the intoxication has worn off, and certain types of tests can come back positive days, weeks, or even months after a person has used drugs.

There are many methods people use to try to beat drug tests and get a clean result. The methods employed will depend on the type of drug being tested for and the type of test used.

There are numerous products on the market that claim to help with detox or producing clean drug tests. There are special shampoos, products reported to help flush the system, products that may be used to cheat drug tests, and supplements that are said to change a person’s chemical balance and therefore trick a drug test. Most of these products are expensive and not guaranteed to be effective.

Many drug tests involve the “pee test” where urine is tested for the presence of specific illicit substances. One of the most commonly talked about methods for helping to produce a clean urine drug test is to try and dilute the drug’s concentration in the urine. This “washing out” of the system can be done by increasing your fluid intake so that you urinate more often. Some claim ingesting vinegar, goldenseal, vitamin C, or niacin can help with this; however, water is generally considered to be good enough.

Taking diuretics can increase the number of fluids that are expelled, and things like coffee, supplements for relieving water retention, and cranberry juice are all weak over-the-counter diuretics. Elevating fluid intake and increasing urination can make the urine less natural in color — more clear than yellow — but taking large doses of vitamin B2 can help to normalize the color, making it less obvious that the urine is diluted. 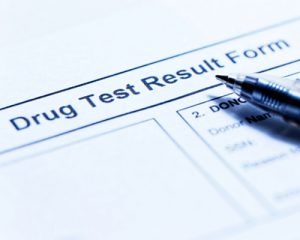 Again, this is not proven to work scientifically every time or to lower levels enough to pass a drug test. There are also many urine “cleanser” powders and herbal teas that claim to work — again, without any medical proof.

Other methods of trying to best a pee drug test include adding things to the urine or tampering with it in some way. This can mean switching out your urine with clean urine; however, many drug tests these days are heat-activated and will recognize cold urine as a method of tricking the system.

People have been known to tape urine samples to their legs when entering a drug test to use someone else’s clean pee.

Others may use a purchased product that claims to be the answer to a clean drug test. These products are often easily detected and instantly make a person look guilty if found out. Additives like salt, detergent, bleach, the cleaning chemical glutaraldehyde, commercial products sold for this purpose, or Visine may be added to urine to alter its chemical makeup to try and fool a drug test.

The active mind-altering component in marijuana is THC, which is stored in the body’s fat cells, meaning that it takes longer than many other drugs to fully clear the system. For a person who uses marijuana regularly, and who has for a long time, THC can be detected for up to a month or two after using the drug. Some reports taking the food emulsifier lecithin can help to break down fat reserves and, thus, help to purge THC from the body faster. Reports of this method working are purely anecdotal.

Hair drug tests may be stumped by using certain shampoos, such as Neutrogena, Head and Shoulders (Fine/Oily), and Rave. These shampoos may influence drug tests by helping to lower drug concentrations in hair.

These methods are not 100 percent reliable. They can also be detected by many tests or even sometimes by smell alone. The only perfect method for producing a clean drug test every time is not to use drugs.

To better understand workplace drug testing, it can be helpful to know what types of tests are used, how they are administered, what types of drugs they screen for, how long they can detect drugs in the body, and how drug tests work.

A drug test analyzes a biological sample, checking for the presence of certain substances or their metabolites through a scientific and chemical process. Federally regulated drug testing involves using a urine sample, the National Institute on Drug Abuse (NIDA) reports. The Department of Health and Human Services (HHS) and the Substance Abuse and Mental Health Services Administration (SAMHSA) mandate the guidelines for federal workplace drug testing programs.

Other drugs can be added to these drug tests when administered through a private employer. For example, a typical 8-panel test will add in methaqualone, barbiturates, and benzodiazepines while the 10-panel test also includes methadone, propoxyphene. Some drug tests can also check for the presence of hallucinogens (LSD, mushrooms, peyote, and mescaline), anabolic steroids, MDMA, and inhalants (glue, paint, or nitrates).

Factors such as how often, how much, and how long drugs have been taken can affect a drug test and how long a drug will be able to be detected. For instance, chronic and long-term use of a drug in large amounts will mean it can take longer to fully process out of the body than a person who took a small amount one time, and drug tests can be, therefore, affected. Using cocaine at a party one time on a Friday night will not generally show up in a drug test administered on Monday morning, for instance. Regular use of the dangerous stimulant can cause a tolerance to the drug to build, however, which can mean a person will then take more of the drug more often to keep feeling the way they want to.

Increased drug use, drug tolerance, and drug dependence can affect metabolism and how quickly a drug is processed out of the body. This then affects how long the drug stays in the system and how long it can be detected by a drug test. Personal biology and metabolism can play a role as well.

Below, we’ve outlined an average amount of time that specific drugs are detectable in the body through a standard urine drug test.

How Long Drugs Are Detectable

Common drug test methods, per the Drug & Alcohol Testing Industry Association (DATIA), include urine, breath, hair, sweat, and oral fluid tests. Urine tests can typically detect many drugs for a few days after using them, and they are the most common method of testing. Breath tests are typically reserved for alcohol and usually only detect it while a person is directly under the influence.

Oral fluid tests include testing saliva for the presence of drugs and are less easy to cheat than urine tests, but drugs are not detectable for as long. Saliva tests are not very common, but they may gain popularity as a method to determine current impairment.

Blood tests also can detect current levels of alcohol or drugs in the body. Again, they don’t detect drugs for as long as urine tests since drugs clear the bloodstream faster than they are metabolized through urine.

Sweat tests involve placing a patch on the skin to detect drug use. This method is typically more frequently used to check for abstinence compliance than in the workplace though.

A hair test can detect drugs for the longest amount of time. It can detect certain drugs for up to 90 days, making it a good indicator of drug use behaviors, and it is harder to beat this test.

The legality of marijuana in many states has many employers calling foul on drug tests that check for this popular substance. Even though it may be legal at the state level for either medicinal or recreational use, marijuana can still legally be included on drug tests. Since it is considered a mind-altering substance, employers still have a right to test for it in their employees.

If you are in a bind, and a drug test is imminent, there are a few things you can do to help your drug test come back clean so that your job stays safe.

The only tried-and-true method to produce a clean drug test is for there to be no drugs in your system for the test to find. While it is preferable not to do drugs at all if you do use them, allow as much time as needed for the drugs to pass out of the system. This will vary according to the type of drug used and the method of drug testing employed.

In addition, don’t give an employer a reason to drug test you. Be safe and refrain from drug use on the job. This way, you can avoid suspicious behavior that might lead to a drug test.