What Is Codeine Most Commonly Cut With?

Codeine is an ingredient formulated in cough syrup. But when the drug is mixed with commonly consumed drinks, candy, or cough syrup, it creates a concoction that becomes the subject of rap songs and emergency room visits.

Codeine is an opioid that is prescribed for the treatment of mild to moderate levels of pain. It is also very good at suppressing the cough reflex, which leads to its controversial use in cough syrups and medications.

As an opiate, codeine molecules fix themselves to the opioid receptors in the patient’s central nervous system. This has the effect of dulling pain sensations and also slowing down the functioning of the CNS to the point where a patient feels powerfully drowsy. The effects of an opioid mean that codeine can be prescribed to treat diarrhea and irritable bowel syndrome since opioids can induce constipation.

These intensely pleasurable sensations mean that there is a risk that a patient can develop a physical or psychological dependence on codeine. For this reason, some concentrations of codeine are classified by the U.S. Drug Enforcement Administration as a Schedule II controlled substance in the United States, meaning that they are only available via tightly controlled prescriptions.

Codeine used in cough syrups has much looser regulations when sold for consumption. Cough preparations containing less than 200 mg of codeine per 100 ml, for example, are Schedule V controlled substances. Schedule V substances have a low potential for abuse.

Individual states may have their own laws regarding whether cough syrup containing codeine can be purchased without a prescription.

Codeine’s wide range of uses and potential for addiction has made it a very popular substance to divert or cut. When drugs are mixed with another substance to provide additional effects or as a way for dealers to cut their own costs, this is known as cutting (also called lacing).

However, codeine is unusual in that it is not usually mixed with an illicit drug; but, can be put together with another substance to achieve an off-label effect for recreational purposes.

The Addictive Behaviors journal reported in 2013 that rates of codeine abuse were highest among Hispanic people, Native Americans, and men. Of particular note was the use of codeine in a concoction known as “purple drank,” the street name for a combination of codeine with soda, alcohol, or other cough syrups.

The mixture is very popular in the hip-hop culture of the southern United States, where many artists have written songs about “purple drank”. It also goes by the name “lean,” because the narcotic effects are so strong that users are unable to remain upright.

The Washington Post reports that codeine is most commonly mixed with promethazine (another cough syrup), carbonated soda, and Jolly Rancher candy.  The consumption of promethazine induces the liver to produce an enzyme, which makes the body respond to the opioid effects of codeine at a much stronger degree than it normally would.

The cough syrup itself is usually consumed at much higher doses than a doctor would recommend. The most popular sodas to use are Sprite, Mountain Dew, and Fanta. A piece of Jolly Rancher candy is typically added to sweeten the mix.

The Daily Beast writes that the codeine mix is sometimes cut with over-the-counter cough syrups to induce hallucinations.

Cough syrup, soda, and Jolly Ranchers might seem harmless, but codeine lacing of purple drank can lead to seizures and the very real possibility of an opioid overdose.

Despite its innocuous appearance, codeine is nonetheless an opioid, and its preparation in purple drank is typically not restricted to medicinal levels.

Speaking to the Los Angeles Times, a doctor warned that “the amount of codeine these guys ingest is massive,” comparing it to a heroin addiction without the needles. 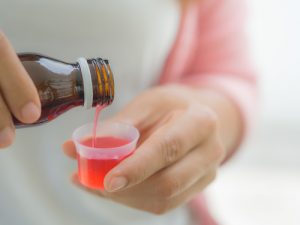 How massive? The amount of cough syrup in purple drank can be more than 25 times the recommended dose.

Additionally, when codeine is taken in this context alcohol is involved — either in the purple drank itself or consumed separately.

Alcohol is a central nervous system depressant, and when taken with codeine, it puts users in danger of depressing their CNS to the point where even basic functions like breathing and heartbeat slow down.

If the body’s vital organs do not get enough oxygen and blood, systemic organ failure ensues, leading to coma and eventually death.

What To Do About Laced Codeine

The best practice is to simply refuse a cup of purple drank if offered, and seek immediate medical attention if you drink any. There is no “safe” amount of the combination to consume. Codeine is dangerous enough when taken without a prescription. When taken in large quantities, with alcohol and other cough syrups, the risk of overdose is high.